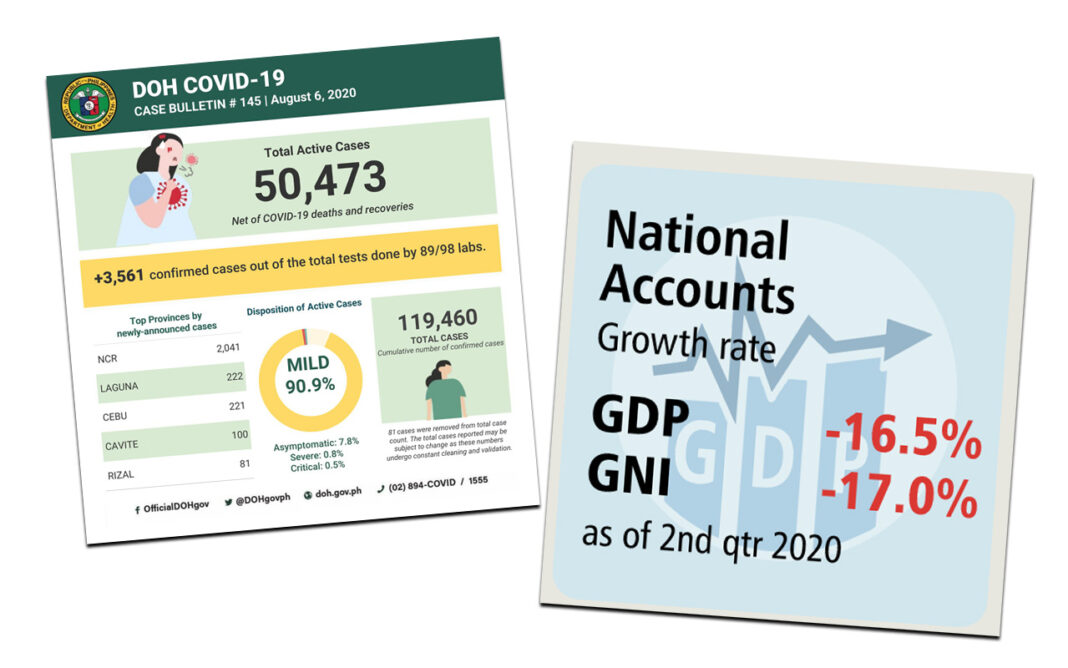 The Department of Health confirmed 3,561 cases today. The number the agency recorded to have tested positive has breached the 150,000-mark also on this day, now at 151,816. The difference between confirmed cases and positive individuals is at 32,356—this is the number of cases that has yet to be validated by the Health agency before it can be included in the number of confirmed cases.

With Philippines topping the number of COVID-19 cases in the region, testing czar Vince Dizon claimed that the country is highest in terms of tests per day.

“We are highest in Southeast Asia in terms of tests per day. We are reaching more than 30k a day. Indonesia does only half that, Singapore not even half,” he said.

Also, on the same day, the long-awaited second quarter growth rate was announced by the Philippine Statistics Authority, with it falling to -16.5 or “much worse than what our government economists expected,” according to Presidential Spokesperson Harry Roque.

Roque averred that the Philippines is not the only nation facing this kind of economic situation.

“COVID-19 has had an adverse economic impact on countries like Singapore, Indonesia, the United States, France, Spain, Mexico,” he said.

The -16.5 growth rate is also the worst plunge of the country’s Gross Domestic Product (GDP) in history—surpassing a record once held by late dictator Ferdinand Marcos, Sr. in the waning years of his reign. The second-largest drop was in the third quarter of 1984 when GDP dropped by 10.7%, based on available government quarterly data dating back to 1981.

“The Duterte administration is to blame for the worst economic collapse in the country’s recorded history. Growth rate falling to -16.5% in the second quarter from 5.4% in the same period last year is an unprecedented 21.9 percentage point drop,” said research group Ibon in a statement on August 6.

The country’s second quarter performance is the worst of the major economies of ASEAN: Singapore (-12.6%), Indonesia (-5.3%), Vietnam (0.4%). Thailand and Malaysia haven’t released their official estimates yet but these are projected to be around -10% to -13% by analysts, said Ibon.

The economy shrinking for the second consecutive quarter also placed the country in a technical recession, the first time in nearly three decades.

“The pandemic’s impact is much worse than it should be because of the Duterte administration’s slow, poor and inadequate pandemic response,” lamented Ibon.

All the countries in Southeast Asia recorded their first cases of COVID-19 within weeks of each other around the end of January.

The Philippines’ National Capital Region (NCR) was placed under the longest lockdown in the world of 77 days – longer even than the lockdown in Wuhan, China where the first cases were discovered – and was now placed back into lockdown for another 15 days.

President Rodrigo Duterte announced on the midnight of August 3 that Metro Manila, and provinces with boundaries to NCR—Bulacan, Cavite, Laguna, and Rizal would revert to modified enhanced community quarantine (MECQ) from August 4 to 18, giving people just 24 hours before the lockdown started.

This was also just after the president announced that he would maintain the region under general community quarantine on July 31, or just three days before he changed his announcement following the plea of health worker groups for a time-out.

The country has just then posted a record-high number of 3,954 COVID-19 cases on July 30, but also reported 34,144 recoveries recorded on July 30. The Health agency has earlier reported the recoveries on July 30 at 38,075 as part of their Oplan Recovery. Patients with mild or no symptoms are tagged as recovered 14 days from the date of onset of symptoms or by date specimen collection, whereas before the Health agency required two negative COVID-19 tests, and then they reduced that to one, and then no longer required a test if no longer showing symptoms after the mandatory 14-day quarantine.