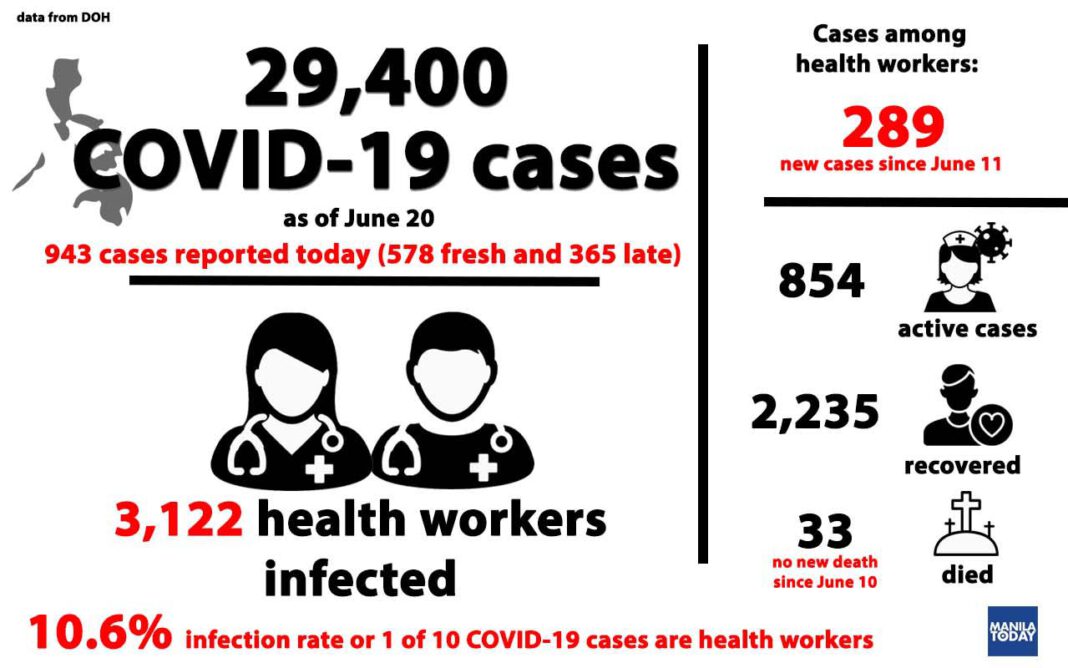 Total number of health workers who were confirmed to have been infected with COVID-19 is now at 3,122 with 289 cases reported by the Department of Health (DOH) in the last 10 days.

The latest number reported on June 20 was part of the 55th issue of the DOH’s Beat COVID-19 Today: Philippine Situationer. There are no more daily reports of cases of COVID-19 among health workers.

The DOH reported a record-high 943 confirmed COVID-19 cases on June 20, differentiating between the 578 fresh cases and 365 late cases. This is second only to the 1,046 reported on May 29, when the DOH said fresh cases were only 46 but late cases were 1,000. The 578 fresh cases reported is a record-high in itself, whether in fresh cases or total new cases prior to the DOH having reported 539 on May 28 (the highest since lockdown started) and then began to differentiate between fresh and late cases. Fresh and late cases represent the government’s testing backlog. The total reported per day would still be the number added to the total confirmed, now at 29,400.

But the Health department reported that there are already 37,776 who tested positive for COVID-19 as of June 21. The difference is the validation backlog.

Active cases are 854 and are at 27.3% of the total infected health workers. No breakdown was provided for severe, critical, mild or asymptomatic cases, but the DOH noted this number is net of deaths and recoveries.

No new death has been reported since June 10, and the number remains at 33.