Home OPINION Too much confidence in president’s men, declares fight vs “COVID-19 and terrorism” 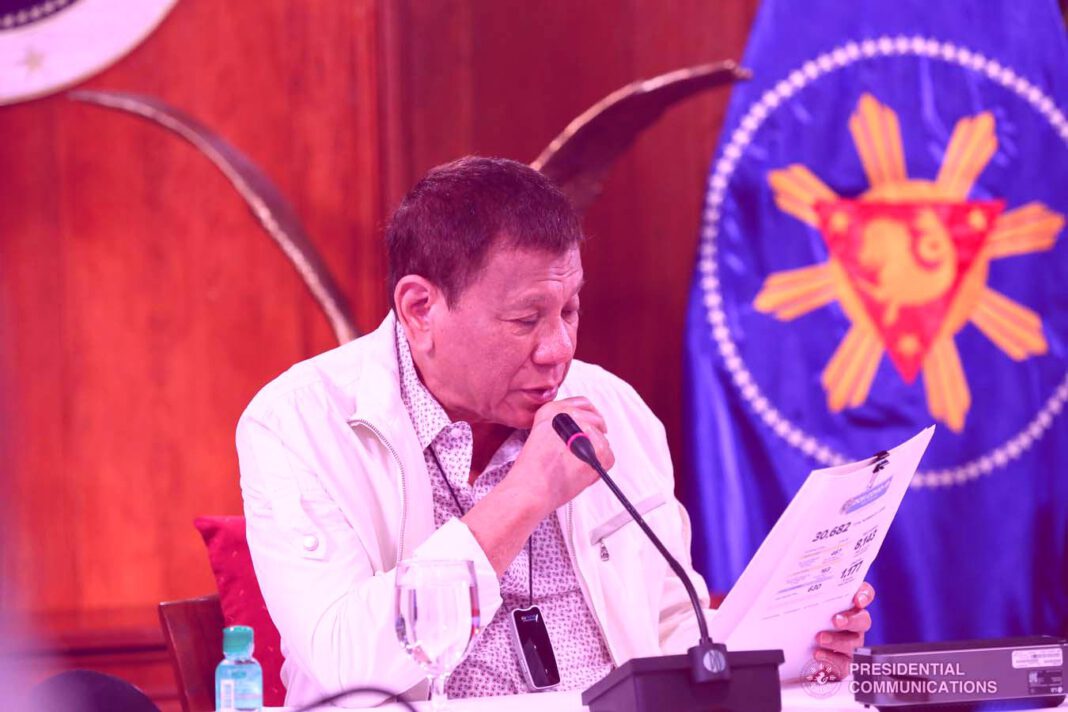 Before hearing the reports from the members of the IATF and the National Task Force COVID-19 (NTF), a body that subsumed the IATF come Duterte’s additional powers in the 3-month long Bayanihan Act, he appointed another retired general, Department of Environment and Natural Resources (DENR) Sec. Roy Cimatu as point person to look into the COVID-19 situation in Cebu.

He ordered Cimatu, also former Chief of Staff of the Armed Forces of the Philippines, “to exercise all the powers of the IATF.”

He further ordered DOH, DILG, IATF, military and police to assist Cimatu and said he can use airplanes and ships in this mission.

Cimatu accepted the appointment and thanked Duterte as he compared this mission to the Boracay and Manila Bay clean up. He mentioned the Spanish flu pandemic in 1918 which he said that the “future will judge us in our response” to the pandemic.

Duterte said “too much confidence and complacency” led to the increase in the number of COVID-19 cases in Cebu.

“Those from Cebu, it’s the same. Why are there more cases? Because you were too confident and too complacent about it. It’s like you ignored it. And there it is,” he said.

Too much confidence in his men

Duterte also defended his Cabinet officials, in effect showing his continued confidence in them, including the most protested of them all—Duque, and why are former generals again on top posts (but not necessarily on top of the situation) of the government COVID-19 response?

Duterte still trusts the “integrity” of Sec. Francisco Duque III and his other cabinet officials. He said that “walay kawat” [no stealing] of the funds to be used in the procurement of PPEs and assistance for the families of frontliners who had died of COVID-19. He mentioned that Sec. Duque is not corrupt; “he has a hospital, school and “gwapag asawa.”

Duque reported that on June 9, 2020, the 32 families of health workers who died from treating COVID-19 patients had received P1M each. There are 19 health workers who suffered from severe complications had also received P100,000.00 each. Nothing new here. These have already been reported by the Health department since June 9.

Duque said Phihealth has paid all the hospital bills. Duque reported that aside from the budget released by the Budget department, Pagcor donated P1.8B for the procurement of PPEs.

Duterte explained in Cebuano that because of the “pandemic,” the countries of the whole world want to procure PPEs. There is a global shortage of PPEs and DOH had to wait for the PPE supply and that the government bought what was recommended by the World Health Organization.

Galvez reported that there are 63 testing laboratories in all regions CARAGA region. The DOH reported 46 labs just a day ago. There are 131 deployed nurses under job order increasing the capacities of hospitals. The testing capacity is still at 12,000, but the government target by end of May is 30,000 and now at 50,000 per day this June.

Lorenzana reported that there are 40,000 stranded people who are waiting to go back to their provinces. There are also 280 non-COVID deaths in Saudi Arabia and  DOLE will hire cargo plane to bring the cadaver back home.

Año reported the distribution of 2nd tranche of 4Ps or conditional cash transfer in CAR and Regions 1-3 were distributed on June 15. Within this week, the Social Amelioration Program (SAP) will be distributed. Good news for the the delayed SAP.

According to the president, there is good news that “many countries have now perfected vaccines.”

“The fighter of the virus is the body, not antibiotics,” Duterte also said.

In this meeting, Duterte ordered the people to wash their hands with any soap. He reiterated to maintain social distancing, wear face masks and said “do not go out.”

“I hate the lockdown myself. In the coming days I intend to go around the country,” Duterte said.

Fight with COVID-19 and terrorism

Meanwhile, Duterte said his legal team is still studying the anti-terrorism bill. He passed it to them and said he did not read it.

Despite the pandemic that has reached 38,500 positive cases (near the UP Pandemic Response Team prediction of 40,000), Duterte said that terrorism and the communists are still number one on the list of threats to the security of the country.

[That is why my orders to the military is to attack them.]

Duterte said the communists will invoke the Geneva Convention, but distorted the reason. He obscured the fact that rebellion is not terrorism and is recognized and operates under international humanitarian law.

“Away ito with COVID and terrorism,” he said.

[This is a fight against COVID-19 and terrorism.]

The people, however, know who is the number one terroist.

The significance in this meeting is the truth that the Duterte government still has no clear cut plans or alternatives to fight COVID-19 pandemic other than military solution.

All we see Duterte do now is talk once a week (and reading from a script such as the DOH infographic he is holding in the photo in this article). In his meetings and public addresses, he listens to reports from his men—the people who look like they are the ones running the country right now.

He placed his fight against the New People’s Army (NPA) on level with the COVID-19 pandemic—his rants against the NPA fill his every speech, sometimes ranting about them longer than we hear a clear picture of where the government is headed in the pandemic response.

It is as if they are just biding time while lives are lost or destroyed by the pandemic and its indirect effects.