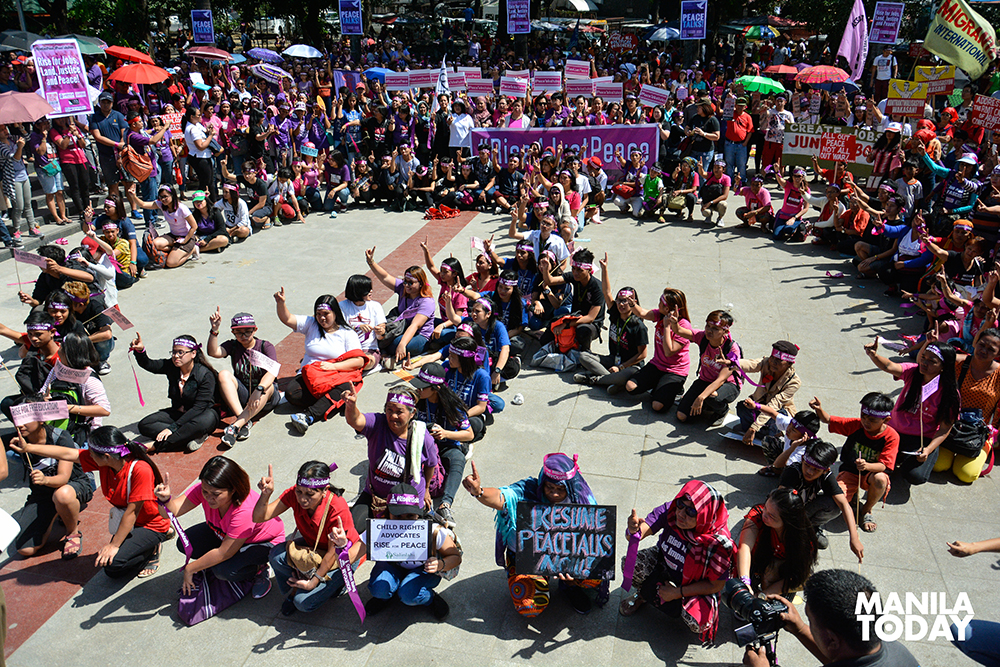 On Valentine’s Day, One Billion Rising (OBR) Revolution – Philippines gathered women from all walks of life at the Liwasang Bonifacio in Manila at 10 A.M. to call for all-out peace and to urge the Duterte government to continue the peace talks with National Democratic Front of the Philippines (NDFP).

In the Philippines, women across different cities clamour for the continuation of the peace negotiations to help end end social and economic violence against women and other sectors in the country.

While the Government of the Republic of the Philippines (GRP) and the NDFP have started discussing the Comprehensive Agreement on the Socio-economic Reforms (CASER), President Duterte has “arbitrarily terminated” the talks with the NDFP this January 7, 2017 and declared an “all-out war” against the revolutionary forces.

GABRIELA National Alliance of Women, one of the partners of OBR, condemns the”all-out war” operations of the Armed Forces of the Philippines’ (AFP’s) in civilian communities.

“Rural communities are the ones suffering from the military’s renewed attacks. The army is carrying out assassinations and arrests of development workers and community leaders, while unleashing aerial bombardments and hamlettings of thousands of rural residents. We join One Billion Rising to bring to the attention of world public opinion that the government’s counterinsurgency program, designed and abetted by the US government, is sabotaging the peace talks and renders millions of women and children vulnerable to exploitation, trafficking, and mass casualty deaths,” said Joms Salvador, GABRIELA secretary general.