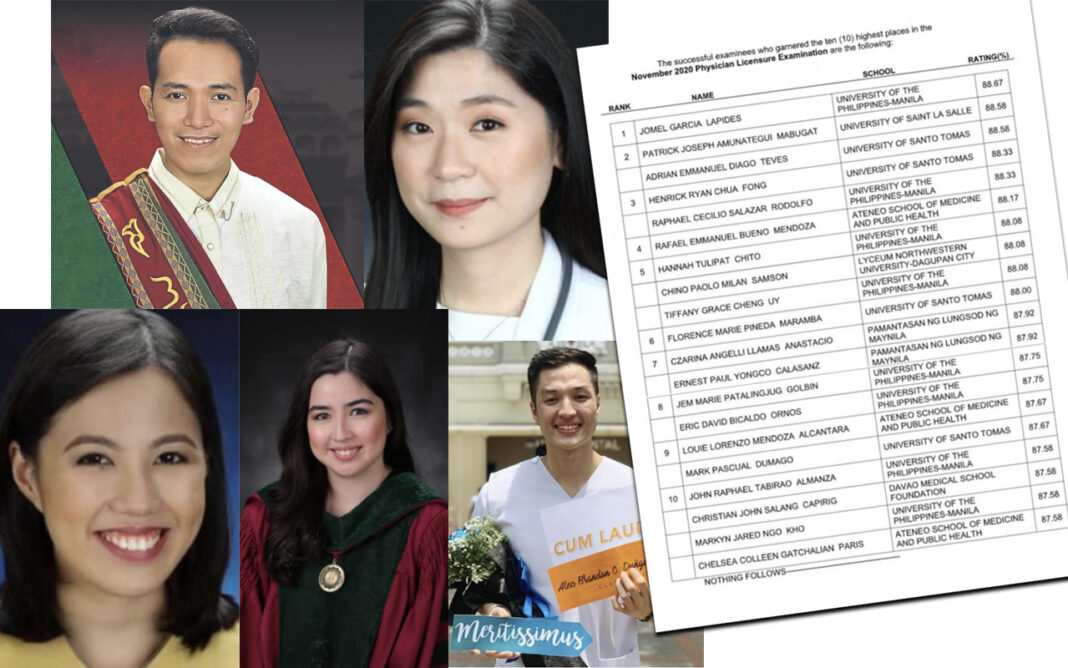 The release of the results of the Physician Licensure Exams was met with many happy celebrations and congratulations—possibly different from the (all-important) fighting or critical mood of social media trending topics in the past months, save for the regular trending topics from fandoms.

The Professional Regulation Commission (PRC) released results of November 2020 Physician Licensure Examination (PLE) or Physician board exams past midnight of November 26. The PRC administered the Physician board exam on November 10, 11, 15 and 16, 2020 in Manila, Baguio, Cagayan de Oro, Cebu, Davao, Iloilo, Legazpi, Lucena, Tacloban, Tuguegarao and Zamboanga. A total of 3,538 new doctors out of 4,704 examinees passed the exams.

In a year of defeats mostly derived from the COVID-19 pandemic, the PLE results were a story of many great feats. While the top 10 were usually feted, many inspiring stories were also shared all over social media.

Despite the red-tagging as “communist recruiter” and threat of defunding from President Rodrigo Duterte and remote learning woes, eight (8) University of the Philippines (UP) Manila College of Medicine graduates placed in the top 10—in ranks 1, 3, 5, 8 and 10.

Jomel Lapides of UP Manila topped the PLE. The new doctor also topped the Nursing Licensure Exam (NLE) that he took back in 2011. He also finished his Nursing degree in UP Manila. After acing the Nursing board exams, he worked in the national university’s hospital, Philippine General Hospital, as a staff nurse. He juggled being a night-shift nurse and a Medicine student, committing to help provide for his family. Lapides is the son of a construction worker. Lapides said he plans to continue to serve in the country.

The daughter of Vice President Leni Robredo, Tricia, also passed the board exams. She graduated with a dual degree in Doctor of Medicine and Master of Business Administration from the Ateneo School of Medicine and Public Health last July. The Robredo daughters were in the news recently following #DuterteMeltdown, when rants of the president against the vice president based on information coming from his cabinet officials were proven untrue, Presidential Spokesperson Harry Roque then said that these rants were then prompted by the tweets of the vice president’s daughters.

Former ABS-CBN talents Angeli Gonzales and Alec Duñgo were among the country’s new licensed doctors. Gonzales appeared in several shows in ABS-CBN as a teen and is also a registered medical transcriptionist and medical laboratory scientist. Duñgo is a “Pinoy Big Brother” alum from the 2012 series.

Seven other universities got 100% passing rate:

Many new doctors took to their social media accounts to thank those who supported them. Many of them had to self-review or review online given the prolonged lockdown and ongoing quarantine, some were on rotations while others were also affected once or repeatedly by the last five strong typhoons that affected all parts of Luzon and some parts of Mindanao.

Tulong Kabataan Metro Manila, a group of relief volunteers currently in their second week of community kitchen in Marikina for families who continue to struggle after the onslaught of typhoon Ulysses, congratulated the new doctors as they represent hope in an exhausted workforce of medical frontliners in the continuing battle against COVID-19 pandemic.

The group also recognized the new doctors’ parents, families and supporters, saying they must have had to depend on their own to finish their costly Medicine degrees due to the government’s lack of priority for education, highlighted even more with the 2018 implementing rules of the 2017 free tuition policy in public universities and colleges that exempted Medicine students from free tuition.

The group has been calling for donations and volunteers and also called for medical missions after Marikina Mayor Marcelino Teodoro also requested for such services be extended to the affected communities.