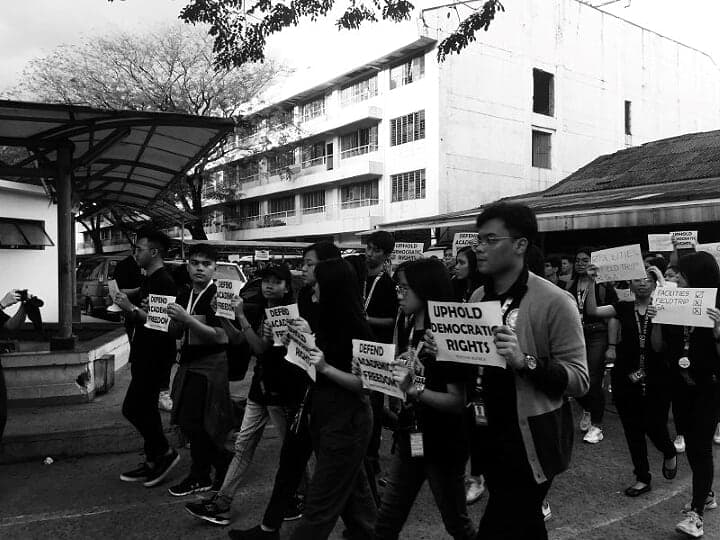 On Wednesday, March 4, students from the Technological University of the Philippines (TUP) – Manila held their first black shirt rally with the calls #DefendAcademicFreedom and #UpholdDemocraticRights.

The protest was organized by TUP University Student Government (TUP USG) Manila after receiving different reports of repression from the students.

Thousands of students wore black shirts, while hundreds marched in solidarity with the Black Wednesday Protest during the afternoon.

Students wearing black shirts gathered at the College of Science-College of Liberal Arts (COS) shed while leaders from different organizations gave their short solidarity message.

Students made four rounds of protest march around the university and decided to stop at the front of Administration Office where they start to raise their calls and grievances over the repressive actions and policies of the TUP administration. They also wanted to have a dialogue between the university president and student representatives to discuss students concerns.

The grievances of students forwarded to the Office of the President included the closure of one of the gates causing student inconvenience, the deliberate stoppage of the President on an ongoing student activity only for the reason of being loud, misprioritization on the distribution of equipment, prohibiting students to use facilities and have their field trip despite being paid, late acknowledgement of student organizations leading to absence of student-related activities spearheaded by organizations, and other things that came with abrupt changes in the system that happened during the term of Torres.

Students from College of Engineering (COE) were distressed as the administration cancelled the proposed fieldtrip program.

[He (TUP President) said that we are only allowed to go to within 50 km radius of the school in accordance to CHED memo, but when we check it, we could not find such provision.]

Issues like the inaccessibility of the court that led to the National Service Training Program (NSTP) and Physical Education (PE) classes being moved to parking lots and scattered places at the university.

The students also showed their dismay over the cancellation of different student activities like organizations’ general assemblies.

TUP USG forwarded a summary of students’ concerns addressed to Dr. Jesus Rodrigo F. Torres, President of TUP. Instead of answering the concerns of the students, he just noted in the communication letter the distribution of concerns to be answered by the university’s Vice Presidents.

Prior to this response, the president is noted to have been aware that Hon. Allona Jade Nadera, Student Regent of TUP, have already discussed with respective Vice Presidents the concerns of students.

Nadera had an opportunity to personally talk to the president, addressing verbally the forwarded concerns, days before the rally.

However, President Torres was deemed not to listen with the concerns Nadera raised, reportedly saying “No, my decision is final!” in response.

With this response, the students decided to hold the rally at 5:00pm for a short program in front of TUP Freedom Wall.

The protest was concluded by Nadera’s speech of gratitude to those who have participated, also recognizing those who were not able to join because of the ongoing classes but showed other forms of support. She also reiterated that the protest is not yet the end.

She asked the students to forward other students’ rights concerns and call attention to them by using the hashtags #DefendAcademicFreedom and #UpholdDemocraticRights in their social meida posts.

TUP USG marked the protest as a successful action since the students united once again for their legitimate demands and democratic rights. It was a first rally in the campus in many years, maybe more than a decade.

The students of TUP are still demanding a public dialogue between administration and the students to address the concerns raised and seek answers from the president himself.