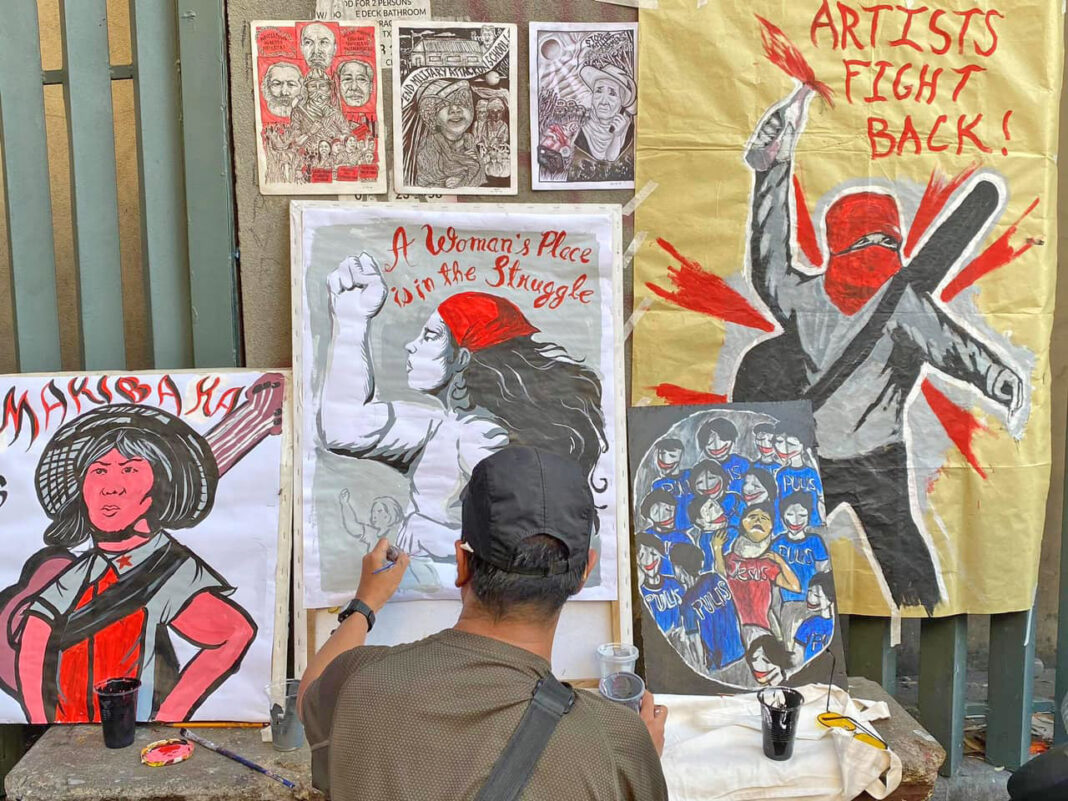 On Monday afternoon, March 2, what could have been an ordinary time for students of Far Eastern University (FEU) and other passers-by took a meaningful turn as student-artists took to Lerma St. not only to exhibit artworks and hit the guitar, but also to educate the public about the relevance of arts and artists in today’s times.

The busy intersections of Lerma where students gather during spare time and construction workers drill left and right amid the scorching heat of the sun witnessed the artistic expressions of student-artists and members of university-based artists’ collective SABAK (Sining ang Bala ng Kabataan)- PIYU.

[By bringing arts into the streets, we are being able to drumbeat the democratic calls for equal rights and justice.]

[In the Philippine society, we still see the rampant oppression faced by women. Because of the existing patriarchal system, there are still women who receive low wages; who are being abused; and whose liberties are being commodified because of their gender and sexuality. We want to dismantle these abuses because we are fighting for equal rights.]

[Arts is our main medium in expressing the people’s dismay and discontent over the unabashed decay of societal order. We believe that what we are doing at Lerma is an expression of progressive arts.]

While Lerma St. is being relived as an arts space, the artists’ collective spokesperson slammed the alleged state-perpetrated attacks on “protest art” and progressive artists which according to him are “part and parcel of the systemic attacks on the freedom of expression and the right to dissent.”

Zulueta was referring to the resolution passed by the Manila City Council declaring artist group Panday Sining “persona-non-grata”; the confiscation of the protest mural of National Union of Journalist in the Philippines (NUJP) during a program held in front of Camp Bagong Diwa in relation to the promulgation of judgment on the Maguindanao Massacre case; the impending shutdown of media giant ABS-CBN; and the reported red-tagging of artists groups and its members.

[As young people’s artists, we are not cowed by the criticisms hurled against the political songs and artworks produced by our artists. In fact, it proves if the message we want to convey is effective…because whatever form of arts that disturbs is an art that liberates.]

Lerma in these trying times

Amid the ongoing establishments of commercial spaces, SABAK- PIYU believes that student-artists in FEU and other nearby universities must unite to relive the progressive tradition of arts and culture movement in Lerma St., citing the relevance of reclaiming public spaces to empower young artists and their role in promoting a “mass-oriented, scientific, nationalist” culture similar to the calls of Filipio youth during the historic First Quarter Storm (FQS) which became instrumental in the ouster of the late strongman Ferdinand Marcos.

[Lerma serves as a hangout space for students. Sometimes, Lerma serves as a meeting place after classes or a place to eat. For us, it is a safe space to stage gigs or exhibits because the students are receptive and participative. It is more possible here to promote mass-oriented, scientific, and nationalist culture which artists should uphold.]

[This is also the same wisdom of youth during the FQS, a time when public spaces became sanctuaries for artworks that expose the injustices in our society.]

A small street in Morayta, Lerma has witnessed various emotions and struggles of students and other passers-by and incidents that have become part of the country’s history.

[Aside from being a ‘’safe space” for students and student-artists and vendors, Lerma has witnessed the agonies of students who are struggling over the failed educational system; of people in relationships who are facing a plethora of problems; of street vendors who are working to sustain their families and children who are still studying; and the protest actions passing by here (Lerma St.) towards Mendiola.]

Speaking on behalf of SABAK-PIYU, Zulueta encouraged student-artists in FEU and other universities to continue the progressive arts movement in Lerma St., a tradition popularised by former FEU students, mostly taking up a Fine Arts degree, in the late 2000s.

[In these trying times, in which Lerma witnesses the nation’s narrative, let us be the light, fellow people’s artists, in the exposition and storytelling of the daily experiences of the Filipino people.]