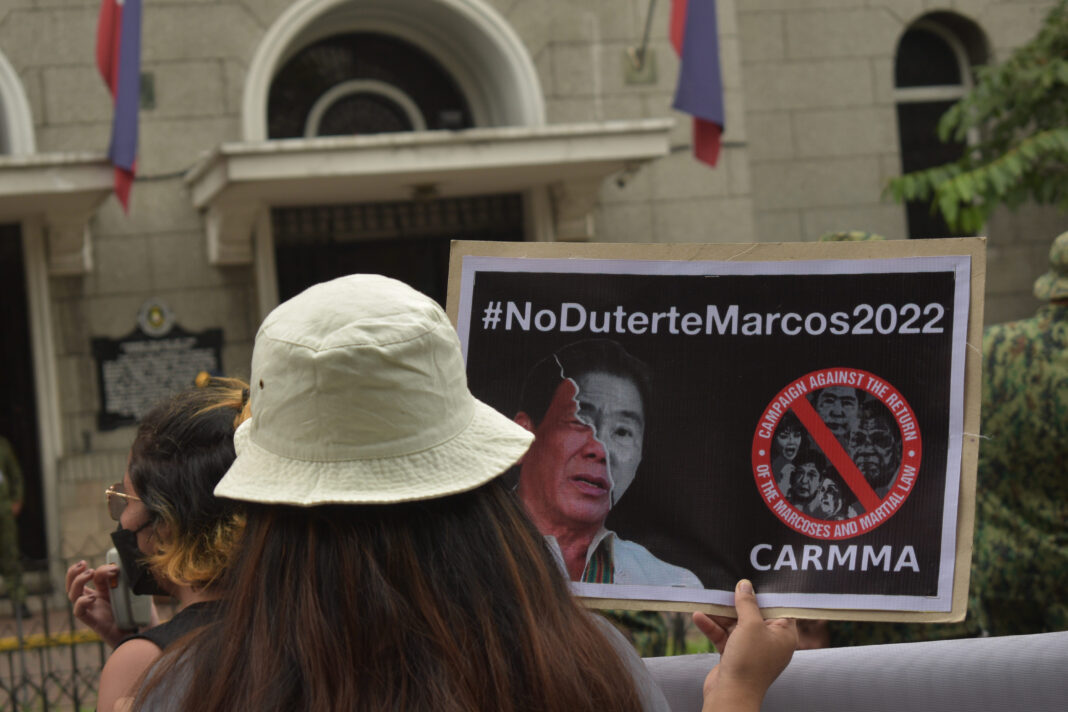 “Marcos Jr.’s attempt to run for president is, above all, a moral and historical issue,” said Campaign Against the Return of the Marcoses and Martial Law (CARMMA) convenor Danilo Dela Fuente.

On November 26, the Commission on Elections’ Second Division heard the first petition to cancel the certificate of candidacy of the late dictator’s son, Ferdinand Marcos Jr.

Marcos Jr. is facing five petitions questioning his candidacy. Of the petitions, three are cancellation bids, one declared him as a nuisance candidate and the fifth is the disqualification.

Human rights defenders, martial law victims, and progressive groups then reiterated that Marcos Jr. should be ‘perpetually disqualified from holding any government post”.

“To allow such is not only a blatant mockery but a shameless bastardization of our democracy and electoral exercise,” Dela Fuente added.

The groups lambasted the COMELEC following its “special treatment” to the late dictator’s son given that the poll body gave more time to Marcos Jr.’s camp to respond to the cancellation petition which violated the poll body’s Rules of Procedures specifically under Resolution No. 95.

Under the said resolution, the deadlines for written responses sought by COMELEC are non-extendible.

“[I]t is the duty of the Commission on Elections to not only settle our petition and the rest the pleas but to safeguard and defend our democracy and our nation’s history from those who brazenly seek to destroy it,” Dela Fuente continued.

Rights group called the public to be vigilant against various deceptive tactics by the late dictator’s son, especially so with regard to historical distortion. According to them, Marcos Jr. heavily relied on the surge of disinformation especially with the brutal crimes of the Marcoses during the Martial law. What makes this worse for martial law victims is that his family remain unrepentant.

Dela Fuente stressed that there can be no healing if there is no justice.

“We must never forget that the Filipino people have fought to reject the Marcoses and their brand of authoritarian rule 35 years ago. To disqualify Marcos Jr. is to uphold our hard-won rights and freedoms and claim our history. We must never again allow despots, tyrants, criminals, and liars to lord it over our land. We say no to a Marcos restoration and a Duterte extension in 2022!” concluded Dela Fuente.