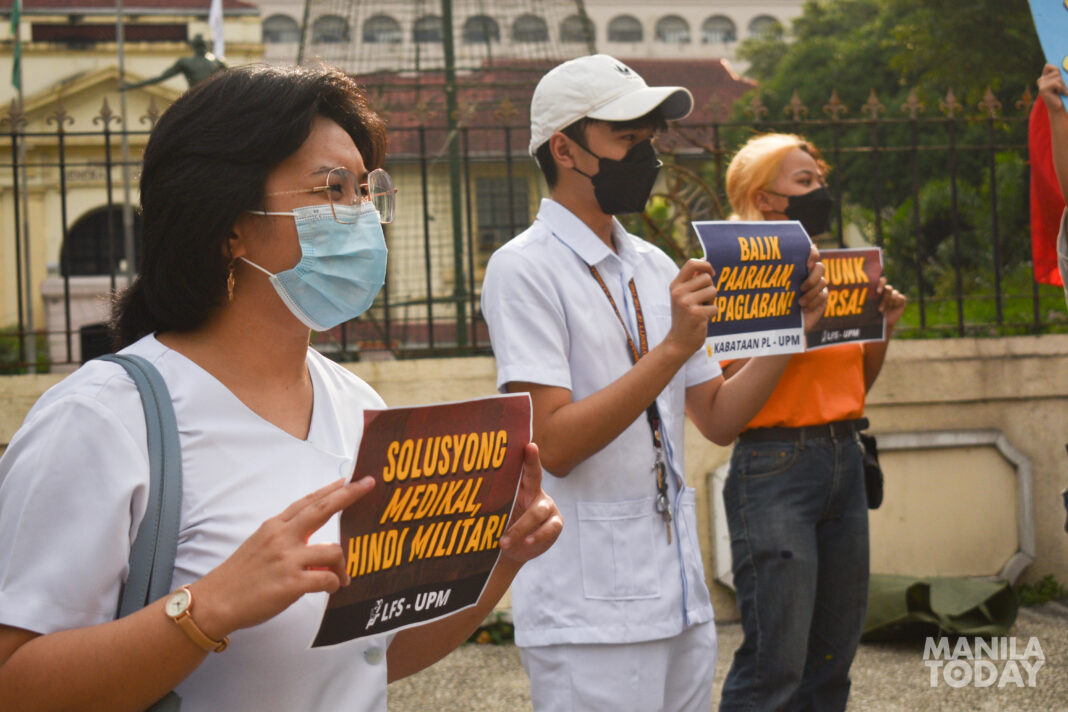 As a reminder of the dire education situation in the country today, Back-to-School (BTS) network launched simultaneous protests at the University of the Philippines Manila, Eusebio High School in Pasig City, and at Poblacion in Muntinlupa City on the September 13 general opening of classes.

The group panned Department of Education (DepEd) Secretary Leonor Briones’ two-years-in-a-row celebratory remarks on the day of opening of classes, despite millions of unenrolled and two years of the problematic distance learning program and decrease in enrollment.

Briones called the opening of classes this year a “success” and last year a “victory.”

Over 2.2 million from last school year’s enrollment figures remain unregistered as classes opened. Last year’s opening of classes saw 1.3 million unable to enroll. Those who dropped out were said to be due their inability to shift to online learning and/or economic difficulties of the family as a result of the pandemic and lockdown.

Aside from those who dropped out, annual enrollment was seen to increase by almost a million students before 2020, which could mean a million more were discouraged from continuing their education, stressed the network.

Student protests on the opening of classes, usually dubbed “First Day Rage,” have been held annually to call out pervading education system woes, such as the small budget that leads to the lack of classrooms and facilities, teachers, books, and admission slots among others. The protest is like a baptism of fire to new students being inducted to education woes, despite what could have been an exciting first day of classes.

Garbed in school uniforms, youth groups along with students and parents pushed the DepEd for the gradual reopening of schools with observance of health protocols as “education in the new normal,” as the Philippines remain only one in two countries in the world whose schools remain shut for more than a year.

[It has been a year since schools were closed and was replaced with online classes, and that only worsened the education crisis. We know that even before the pandemic, there were many out-of-school youth. But the number ballooned because many cannot keep up with the online class.]

Solde reiterated the students’ concerns with regard to module, gadgets, internet support, excessive workload and study load, and wanting school safety measures, as observed in the last school year.

[Aside from crises brought by the pandemic, added to our expenses were gadgets and internet connection, which is very expensive yet very slow. The government has released a huge budget but the students, teachers, parents, even the health workers did not feel it.]

[Many young students are also forced to quit schooling and find work just to help their families.]

Marijan Joy Pering Blas, 18 is supposed to be a Grade 7 student in Nagpayong High School but chose to not enroll for this school year given the difficulties brought by the blended learning scheme.

[I chose to work instead by taking care of a child in Cainta.]

She lamented how poor the internet connection was in their area especially during inclement weather.

[I can’t follow the online class very well given the poor signal. I also couldn’t understand the lessons. At times, the teachers will just send the lessons via chat about and you will answer the module on your own. And what they actually teach is in the module and then the modules will be submitted to them.]

She has three other siblings, but only one of them enrolled for this school year.

Their mother, Maricel Pering Blas, stressed that not only her kids felt the burden of distance learning but also the parents who are compelled to study or even answer the modules whenever children could not understand the lessons just so the school requirements are complied with.

[They have questions that we can’t answer. Unlike in face-to-face classes where the teacher is there and explains the lessons so that they can really understand.]

She said that the last school year had only been a waste of time for her children.

[If they study online, when they get bored, they would just leave. If there is a quiz, the answer is also in the module and they will just copy it there. It really is different when they can interact in class, they can interact with their teachers. A year has been wasted like this.]

Students taking up dentistry and nursing in UP Manila slated the ‘ineffective, inept, and inaccessible’ blended learning arrangement in the tertiary level.

UP Manila is one of the 10 schools approved to hold limited face-to face classes last June 1.

[At UP Manila, limited face-to-face meetings were held this July, the faculty, staff, admin and students worked hard for this. Students need this more to ensure complete skills and training in their courses.]

On the other hand, Gail Macasu, a nursing student, shared her experiences last year when she used several materials in their household as her patient in order to perform activities needed for her class.

[I turned various tools and equipment at home as patients. I used fruit, t-shirt. I am afraid with how I will deal with my future patients if I would not have enough knowledge and experience to serve my patients.]

The health sciences students were also distressed with the need for ‘second gadgets’ so they can be monitored as they conduct their exams via Zoom.

[If students don’t have gadgets, how can they keep up with the learning?]

Beatriz Frondoso, who is a dentistry student, shared that dentistry students have to shoulder almost P80,000 for lab equipment for their online laboratory classes last academic year. She argued that these should have been shouldered by the college.

Also, they need not have the burden of these additional costs if there were face-to-face classes as the school already has the dental equipment they need for their classes.

BTS Network said the closure of schools is due to the government’s poor pandemic response and not the government merely playing safe or wanting kids to be safe. Such bad pandemic record, like the longest lockdown in the world while cases are still surging up to now, cannot be undone and will now be part of President Rodrigo Duterte’s legacy, said the group.

Duterte said there will be no face-to-face classes until the COVID-19 vaccines arrived in the country. Inoculation started on March 1, but remains slow as only up to essential workers in essential industries have been vaccinated and not more than 15% of the population, and 23% of the target for herd immunity (70% of the population).

Meanwhile, apart from again announcing a pilot test for face-to-face classes, the DepEd has yet to provide a clear roadmap for reopening of schools, that the students see as the only solution to distance learning problems.

[The imposition of academic breaks and academic ease are only band aid solutions and will never be effective solutions to uphold quality, mass-oriented, and scientific education.]

[Duterte is trampling on the opportunity for the students to learn the right way to become the doctors, dentists, therapists, nurses, and researchers for the people, especially amid this health crisis when they are most needed.]

[I thought the nation’s hope is the youth. Then why are so many of them out of school now?]

With Briones’ another claim of triumph, the students said the real victory is when the ‘corrupt and inutile’ government officials were held accountable and removed from office, including the education department secretary herself.

[With the coming of new academic year, let it be a signal of our united stand. Let us act and take back the future and the opportunities being stolen from by the inutile Duterte administration.]