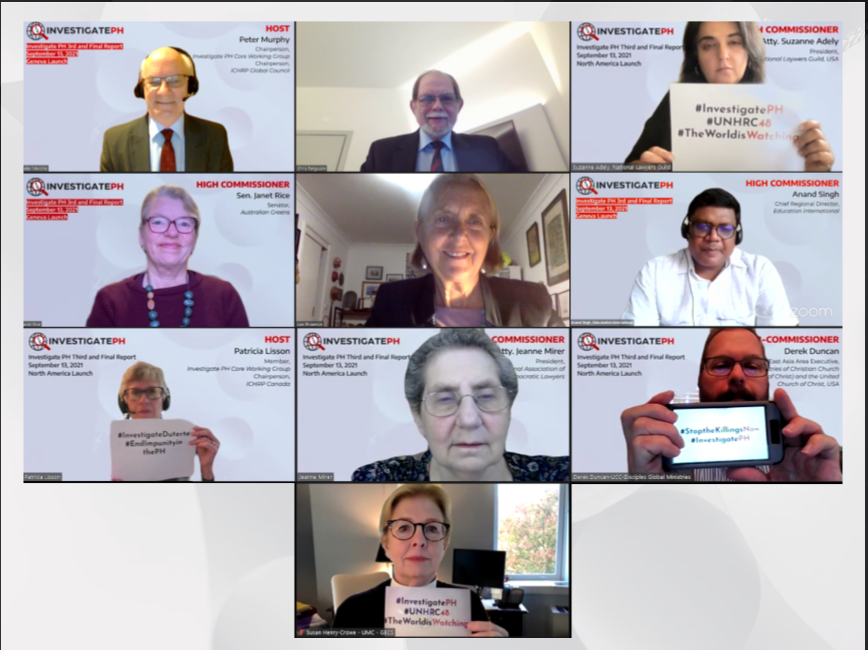 Investigate PH, the independent international commission of investigation into human rights violations in the Philippines, released its third and final report on September 13.

The group probed into abuses of economic, social, and cultural rights of the Filipinos. It also looked into the administration of President Rodrigo Duterte’s repression of upholding rights to self-determination, development, and peace in the country.

They released 17 recommendations, including expediting the recommendation of the former ICC Prosecutor Ms. Fatou Bensouda to conduct an investigation against the “war on drugs.”

Duterte’s grim tactics under influence of the US

Based on the report, Duterte’s government intentionally defied human rights and cut down the peace talks with the National Democratic Front of the Philippines (NDFP) in November 2017 and also labeled New People’s Army (NPA) as a terrorist organization under the influence of former US President Donald Trump.

The decision led to the gruesome killings of seven peace consultants by state security forces or suspected state perpetrators. In the first and second reports of Investigate PH, harsher repression in the country resulted following the termination of the peace talks.

The findings in the third report showed that human rights violations have escalated since the report issued on June 4, 2020 at the UN Human Rights Council.

For about 50 to 70 percent, the number of killings caused by the drug war escalated per month in the course of the COVID-19 pandemic and lockdown.

Harassment and killings aggravated when the Anti-Terrorism Act of 2020, also known as Terror Law, was approved. The law has become the main tool of NTF-ELCAC and other state agents to abuse people who oppose the government’s wrongful doings and to make dissent illegal.

“The Duterte administration’s systematic attacks against leaders of peasant and Indigenous People’s communities, peace consultants, human rights defenders, religious leaders and organizations that are fighting for people’s rights and pushing for meaningful social change should be condemned by the international community. It is our moral responsibility to exhaust all means to put an end to such atrocious acts and help victims in their struggle for justice.” Rev. Dr. Chris Ferguson of the World Communion of Reformed Churches stated.

To sum up the series of reports

Investigate PH narrowed down over 50 indicative cases of human rights violations under the Duterte regime this year, counting the Tumandok massacre last December 30, 2020, which led to the death of 9 Tumandok Indigenous People and the killing of nine activists in the “Bloody Sunday” in Southern Tagalog last March 7, 2021. These happened during pre-dawn police raids serving search warrants for firearms from so-called warrant factories and the police using the war on drugs excuse “nanlaban” [they fought back] for the killings.

mechanisms fail victims. As we anticipate the progress report on the OHCHR’s technical assistance on human rights to the Philippine government, we, again, call on the High Commissioner and the Council to mobilize international mechanisms to help victims and hold Duterte and other state perpetrators accountable,” Investigate PH said.

As different organizations and civil society groups around the globe have ratified the United Nations Humans Rights Council (UNHRC), the Office of the High Commissioner on Human Rights (OHCHR) will disclose the progress of the technical cooperation alongside the Philippine government at the 48th UNHRC session this upcoming October 7 to make an examination on human rights violations under the Duterte administration.