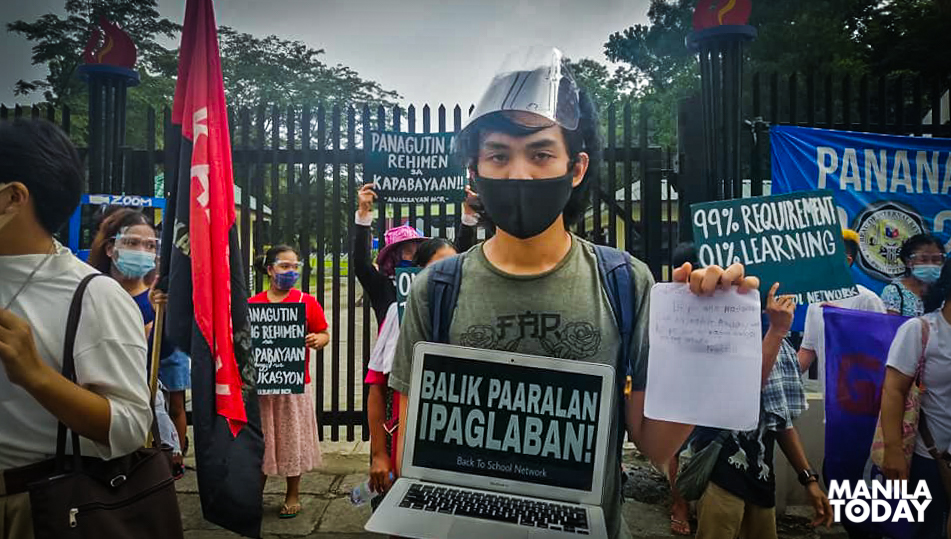 Back to School Network blames the government’s poor pandemic response as the cause of the current crisis in education. Dropout rate in basic education enrolment saw a record-high as the country moved to distance education last year, whereas before enrolment increases by around a million students each year since 2015, the group noted a study by the League of Filipino Student Metro Manila. Students, parents, and teachers bore the brunt of the sudden shift to mainly online learning and asynchronous lessons through self-taught learning modules.

The glaring impact on quality and accessibility of education under the current situation are now being assessed as classes reopened in private schools weeks ago and enrolment is ongoing and classes will reopen still under distance learning on September 13 in public basic education.

The Philippines is one of the last two countries in the world who has not returned to any form of face-to-face classes after almost 17 months since the lockdown was first implemented and schools were forced to close here.

“Why are we struggling?” questioned by Ram Matthew Obidencio, a senior high school student.

Obidencio noted how often students experience mental and physical exhaustion over the flexible and distance learning scheme of the government.

Additional economic burdens were also shouldered by students and their families to shift to online, distance or flexible learning—whatever is the prevailing terminology, he said this meant additional expenses for students. These were for load consumption for data and internet connectivity, procurement of gadgets and setting up study areas at home if they can afford it. Some schools also continued to enforce uniform rules and some charged the same or more tuition or charged for the additional materials and references to make up for the loss of face-to-face classes.

He also lamented how learning modules were replete with errors, creating confusion among students and leading them to rely on the internet to understand or fact-check.

Parents shared the students’ struggles as they were forced to replace the role of the teacher at home, while some felt they had enrolled themselves as they needed to refresh and go over the lessons and worksheets and compensate with their own skills and knowledge, or research online as well, whatever the learning modules lack.

[We parents are working. There are even some modules that were handwritten and we answer these ourselves. We also find it hard when a lot of modules were tasked to be completed at the same time.]

As a working mother, there were instances that Jackie would file for leave of absence in order to submit her child’s modules to the school.

[If they would now really open the schools, we expect they would take care of our children. They have to do all they can so they would not get infected with COVID-19.]

Back to School Network said that the approved DepEd budget in the ₱5.024-trillion 2022 national budget should be utilized for the re-opening of schools in observance of health protocols.

The network presented the idea of re-opening schools with health protocols implemented to ensure the safety of the students as “education in the new normal” since the reopening of classes last year, during a time when a lot of countries never even closed schools, while some neighboring countries have reopened schools. They suggested how this could be made possible:

One of two countries yet to resume face-to-face classes

In late August, while Metro Manila was again placed under strict lockdown due another COVID-19 surge, the United Nations Children’s Fund (UNICEF) warned that Filipino children will continue missing out on learning opportunities as schools remain closed since the pandemic hit. This came after the DepEd announced the September 13 opening of classes still under distance learning mode.

In a statement, UNICEF said schools around the world were closed for an average of 79 teaching days in 2020, but schools in the Philippines have been shut for more than a year now.

UNICEF said learning gaps and risks of children never going to school skyrockets if schools continue to remain closed. Lack of learning materials, lack of technology support and factors at home may hinder a child’s participation in classes outside of schools.

Since March 2020, countries such as Bangladesh, Kuwait, Saudi Arabia, Venezuela including the Philippines have completely shut school physical operations nationwide. Meanwhile, the first three countries mentioned above are about reopen their schools this September 2021, according to UNICEF Philippines Education Chief Isy Faingold.

“In the beginning, school closure is believed to be the right thing to do given that there is yet a concrete information and fear (among the people) with the pandemic. But there has been that learning loss as learning in distance is not the same as in-person modality,” Faingold said.

He also mentioned more inequalities such as the rising drop-out rates, psychological, and socio-emotional impact that school closures have established.

“Learning of the children is a must and we all have a role to play,” Faingold said.

Apart from targeting the return of all children and youth to schools, remedial learning to catch up on lost classes and support for teachers to address learning losses and incorporation of digital technology in their learning were also recommended by UNICEF, UNESCO and World Bank.

Following the UNICEF release on the statistics that placed the Philippines in another undesirable category during this pandemic, the Department of Education (DepEd) announced that it will again pursue limited face-to-face classes.

Duterte earlier rejected the DepEd’s proposal for limited face-to-face classes, while senators criticized the DepEd over the agency’s ‘slow and pathetic’ or indecisive plan to roll out in-person classes.

The DepEd said least 120 schools—in both public and private—are now being eyed for pilot face-to-face classes once allowed by the president.

However, according to Faingold, this number is only 1.39% in 8,627 schools in municipalities accounted for either a minimal or low-risk area as determined by the number of cases they have had.

Developing a decentralized system for decision-making is what Faingold foresee should the Philippines implement a gradual implementation of school reopening on low-risk areas in consideration with the COVID-19 pandemic.

This means that not only the national government but also the local and remote areas should track and decide whether it is safe to operate the schools little by little. Concrete planning, effective contract tracing, additional testing centers, alongside adequate funding are hence deemed necessary in order for this to materialize.

[This is the right of the youth, of the people, even in this situation. This right must be taken into consideration. In fact, not only the right to education is violated here, but also their right to health care.]