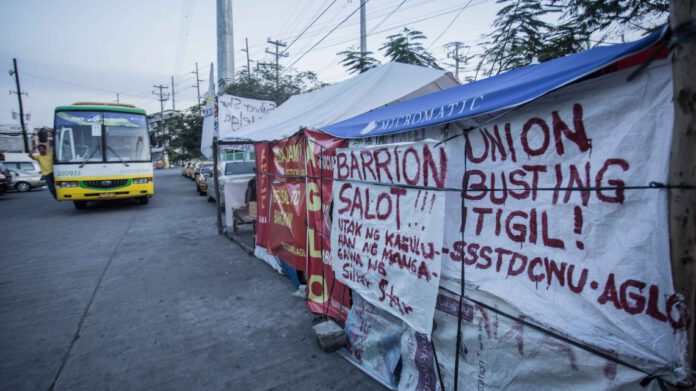 More than 100 drivers, conductors and mechanics of Silver Star Shuttle and Tours, operator of Silver Star bus plying the route Cubao/Pasay to Samar/Leyte/Bohol, went on strike on May 12 due to the “company’s refusal to bargain.”

The workers under Silver Star Shuttle and Tours Drivers Conductors Mechanics and Workers Union (SSSTDCMWU) established a picketline at company garages in San Pedro, Laguna and in Samar. Operations have been paralyzed for three days, as no more buses were able to take trips.

SSSTDCMWU was recognized by the Department of Labor and Employment Region 4-A as the bargaining agent in behalf of the company’s drivers, conductors and mechanics after the union won with majority votes in the Certification Elections held on November 28, 2014. However, the company management has not faced the union on the bargaining table.

While being referred as regular workers, the drivers receive pay on percentage basis or 6% commission from their bus trips, divided among two drivers or three when they have a conductor. Their two-way trips can take as long as four days going to Samar or Leyte and as much as seven days going to Bohol.

During five peak months every year, the drivers can earn as much as P 30,000 per month. But they could also earn as little as P 2,500 or even negative (as gas is deducted from a trip’s earnings) during seven low or lean months.

Apart from the commission per trip, they do not receive benefits nor expect retirement pay, though many of them have been with the company for more or less a decade. Pay is on “no trip, no pay” basis, which is why drivers are forced to work even if they were ill.

More than twice, Silver Star employees have tried to organize among themselves to fight for regularization, regular pay and benefits but it is only now that they have successfully registered as a union and even won as the bargaining agent in the company.

Around the same week, more than 300 contractual workers of Tanduay in Cabuyao, Laguna also went on strike. Talents of GMA 7 await the labor arbiter decision on the regularization case they filed against the media giant last year and they continue to expose their plight even if some were “technically dismissed” by the company.