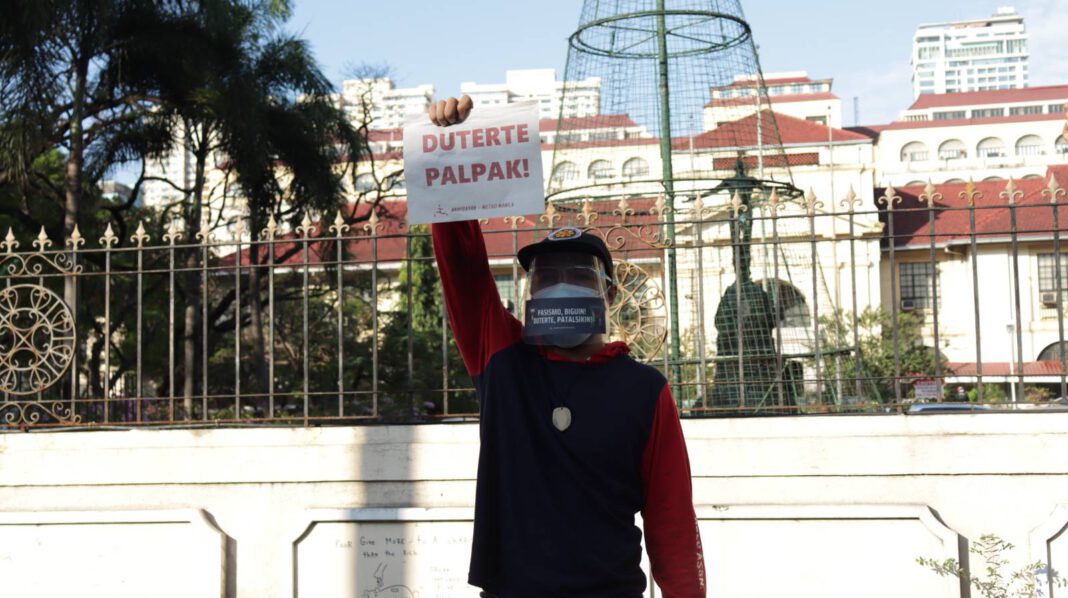 Looking back onto the imposed lockdown across the Luzon-wide cities and provinces of the country due to the coronavirus disease pandemic last year, such adverse impacts brought by the health crisis have been worsened with various socio-economic issues endured by different sectors.

To reiterate, the heed for “Solusyong Medikal hindi Militar” effort remain unheard, if not fell on actual deaf ears of the current administration.

Not only the Philippines is categorized for the world’s longest lockdown, but it has also been the strictest and ‘bloody’ in depiction.

On March 16, 2020, more than 53 million people in Luzon including12 to 15 million residents of the capital region perplexed over the implementation of a militaristic lockdown, many referred to as a de facto martial law, instead of addressing it as a public health measure.

Case in point, it is evident that many have witnessed the shrinking space of democracy amid the continuing state corruption, poverty, hunger, unemployment, and rampant human rights violations in the face of the global pandemic.

As a matter of fact, United Nations High Commissioner for Human Rights Michelle Bachelet dubbed the Philippine lockdown as a “highly militarised response” and that the Duterte government’s vested emergency powers “should not be a weapon (that) can wield to quash dissent, control the population, and even perpetuate their time in power”.

In Metro Manila, a youth-led indignation protest was ignited in front of the Philippine General Hospital to condemn the Duterte administration of its misprioritization to somewhat ‘curb’ the spread of COVID-19.

Trinidad emphasized that the government’s responsibility is to conduct mass testing, contact tracing, and isolation along with providing vaccine, economic subsidy, food, shelter, and education.

A harrowing story of injustice

More than 15,000 frontline health workers have been infected by the virus, claiming at least 800 deaths, affirmed by Dr. Leni Jara.

Dr. Leni is the wife of Dr. Raul Jara who are among the first health workers died due to the COVID-19.

She added that the government’s response is a harrowing story of injustice more than it intends to spark frustration and anger.

On Tuesday, the government announced that it had vaccinated 215,997 Filipinos against COVID-19. Vaccine czar Carlito Galvez Jr. once claimed that the government aims to vaccinate around 70 million of Filipinos in three to five years.

Currently, there are 1,125,600 doses as vaccination drive began on March 1 with 600,000 Sinovac shots donated by China and another initial 525,600 doses of AstraZeneca’s vaccine were also received through the COVAX facility.

The vaccine czar also noted that 1.4 million doses of COVID-19 vaccine, in composition of 1 million doses of procured CoronaVac and another 400,000 doses donated by the Chinese government, are to arrive in the country this March.

The group of jeepney drivers lamented that the government is not only killing many Filipinos of hunger and starvation but also killing in actuality. Ranjo recalled the heinous massacre among nine activists in Southern Tagalog which included Bayan Cavite coordinatior Manny Asuncion.

According to Ranjo, Asuncion had long been a supporter for the call of transport groups to allow public utility vehicles, especially jeepneys to operate as well as the campaign to lambast the jeepney phaseout plan of the government.

On Monday, President Duterte ordered for Filipinos to not despair, sending off his usual ‘kaya natin ito’ mantra and that we can always trust his governance.

The president’s statement, once again, has triggered citizens unrest. While the third sentence from his remark isn’t really wrong given how foul and faulty his administration was, said by group of protesters.

Accordingly, as reported from above, these are among the glaring issues that various sectors have been experiencing throughout the year of pandemic.

He also condemned presidential spokesperson Harry Roque with regard to “excellent response to COVID-19 pandemic” remarks ironic to the spox’ current situation being positive to the virus.

Furthermore, he scored the findings of Department of Labor and Employment regarding the country’s unemployment rate which ballooned to 4.5 million. Social Weather Survey (SWS) on the other hand has reported 22 million workers who have lost their jobs and did not receive economic relief from the government during the time of pandemic.

To think that the Philippines has procured such outstanding loan, Reyes said “Oh may utang, eh ‘di ibig sabihin may may pera… pero walang ayuda?”

On March 16, Finance Secretary Carlos Dominguez reported that the country has ‘secured’ a funding need to procure COVID-19 vaccines through another loan investment amounting to $1.2 billion or at least P56.4 billion.

Take note, this figure is not yet included from the almost P10 trillion Philippine acquired debt.

Looking back to school

Reyes also assailed the Philippine education in view of the defective and expensive mode through distance learning which has gone for a year. United Nations International Children’s Emergency Fund (UNICEF) further noted that the country is branded as the “world’s longest time for school closure”.

“COVID is affecting all school systems in the world, but here it is even worse,” said UNICEF-PH education chief Isy Faingold.