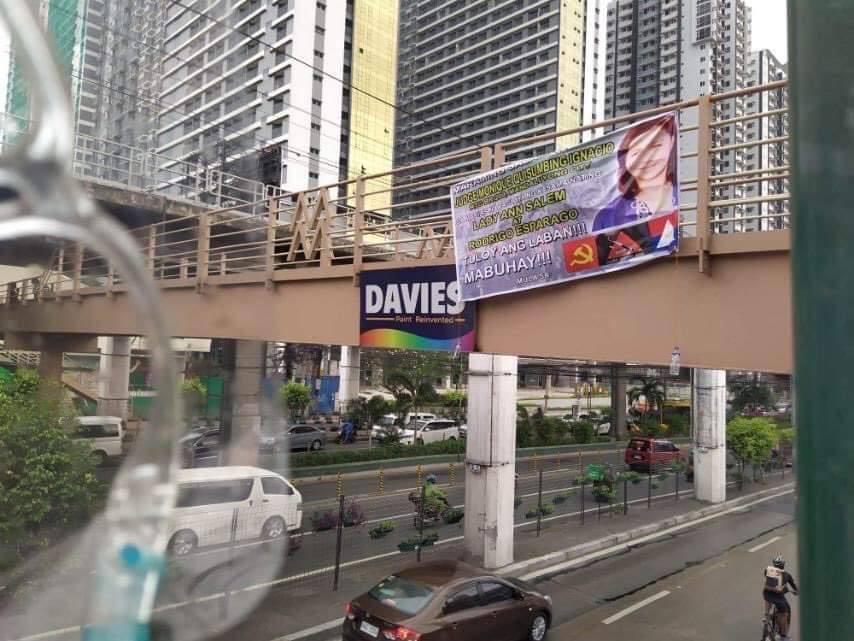 If not search warrants and stories of “nanlaban” tragedy; tarpaulins, too, seemed familiar.

This came after several badly-designed tarp materials were put up in the usual spots of anti-insurgent red-tagging tarps frequently seen along pedestrian overpasses and sidewalks.

From the lay-out, font style choice, color scheme, and its overall appeal— the ‘congratulatory tarp’ is comparable to the anti-communist tarp materials which were seen hanging in the overpasses along EDSA-Cubao.

Not to mention that this was spotted along EDSA Shaw.

A group of political prisoners’ kins Kapatid through spokesperson Fides Lim twitted that these tarp materials speak for the government whose fond of proliferation of red-tagging.

“The tarps speak for themselves. Independent, fair minded judges are under attack. Who has the motive to produce such inanity other than those extremely fond of red-tagging. Their handiwork will boomerang on them,” said Lim in a statement.

Bayan Muna representative Ferdinand Gaite have also tweeted the same designed tarp, quoting that the courts are under attack.

“After PNP’s attempt to profile HR lawyers, now we’re seeing harassment vs. judges who expose their flawed searches,” it said in the tweet of Gaite.

“Insinuating that the judge and our clients are linked to the CPP and NPA is consistent with the government’s own posturing in these cases. It has always been the National Task Force to End Local Communist Insurgency (NTF-ELCAC) that raised these connections, using false and perjured witnesses and filing of false charges,” the law firm assailed.

“The awkward feature of photos, prominent use of communist logos, and wily messaging has been a hallmark of recent propaganda, all calculated to increase alarm and concern,” it added.

PILC reiterated that the case dismissal against Salem, be it in terms of clear legal merits, has been one of the few reassurances that state-sanctioned wrongs and political persecution can be addressed and corrected. Further, they lambast this incident which invariably shifts the attention to courts doing their jobs properly instead of to law enforcement that violates civil and political rights.

“Not only is it an underhanded threat against Judge Quisumbing-Ignacio, it also seeks to undermine the independence of all judges and the courts handling similar cases,” PILC concluded

Salem along with trade unionist Rodrigo Esparago have been freed after the Mandaluyong court through Judge Monique Quisumbing-Ignacio of Branch 209 junked the fiscal’s motion for reconsideration found with ‘bereft of merit’.

Looking back to the tarpaulin showing the logo of the Communist Party of the Philippines (CPP) giving ‘thanks’ to Judge Ignacio for her quick dismissal of charges against Salem and Esparago, there is an implication of red-tagging indirectly the Mandaluyong judge. although no one was claiming responsibility for the motive.

“NTF-ELCAC behind this veiled threat against judges who go against AFP/PNP abuses, depicting them as pro-CPP/NPA, thus targets for armed suppression,” Valbuena added

“The fake congratulatory tarp is a veiled threat against the good judge and other judges who would dare remedy the injustice this administration committed against activist, journalists, the Filipino people,” Salem continued.

National Union of Peoples’ Lawyers (NUPL) has recorded at least 54 killings of lawyers and judges under President Rodrigo Duterte’s watch. On the other hand, Free Legal Assistance Group (FLAG) also came out with their study reporting at least 61 slain lawyers since 2016.