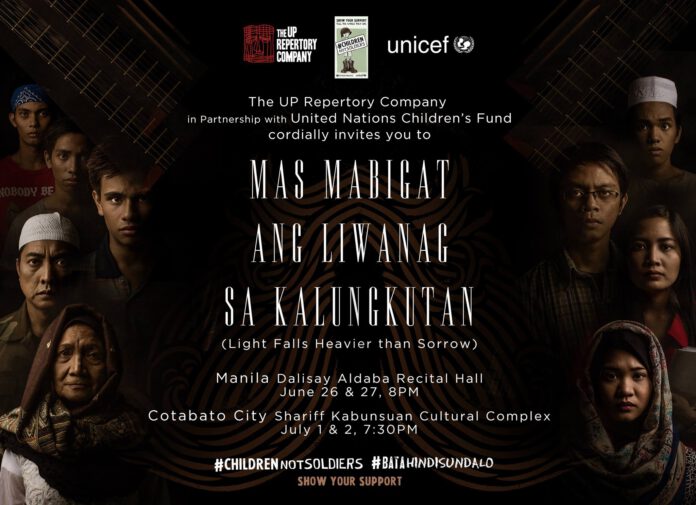 The opening monologue of an old Moro matriarch was beguiling (yet peculiar, as Muslims were known for hierarchical gender roles, men above women). It set the language (a lyrical one) and tone (somber) of the play. The nostalgia in the monologue takes the audience through deep and lasting pain of the continuing war and how agonizing it is to know war as well as they do.

The technical aspects of the production were clean, polished and streamlined. The stage shifts as needed and perhaps more daringly than the group or the audience is accustomed in UP Rep plays. The group also made use of needed equipment to supplement the Dalisay Aldaba Hall’s limited facilities for theater productions. To push the bar of the group’s own production standards could only lead to better and better technical expertise.

All the actors were comfortable in their roles. Dialogues were a blend of Filipino and the local language (probably Maguindanaoan). Actors were also comfortable speaking lines in the local language, yet they speak in the inflection of Tagalog/Filipino when they speak Filipino. The force of having the actors speak Filipino with the inflection of the local language (as do locals) lies in making the audience experience and realize that they are listening intently or eavesdropping on the thoughts, conversations and persuasions of the Moro people probably for the first time.

While the play gave effort to incorporating the local language, the culture and teachings of Islam were not as evident or were not keenly presented as such to make everything more authentic. The laws and religious teachings were not as binding and defining to the characters as much as their perceived political issues or personal conflicts. Islam is not only a religious identity but the way of life. Except for the dayunday, the native theater, dance and music were passed up in favor of more popular theater forms or common techniques such as shadow plays, modern dance and the Eraserheads. The Eraserheads, that time’s most popular band, was featured many times to build that Mindanao – Muslim – UP connection.

The play is also timely because the Mamasapano incident happened in January this year and everyone finally looked closer and deeper into the Noynoy Aquino-MILF peace agreement, a bill now pending in Congress

The play is timely; staged a few days from July 9 this year, the 15th year from the day the Marines overrun Camp Abubakar (the ending in the play’s timeline). The play is also timely because the Mamasapano incident happened in January this year and everyone finally looked closer and deeper into the Noynoy Aquino-MILF peace agreement, a bill now pending in Congress. But this is also the time that the oft-beleaguered Aquino administration is using all pulls to push for the peace agreement in Congress to credit his “tuwid na daan” platform and eventually, ultimately use this as a pretext for opening up the Constitution for changes. As did his predecessor Gloria via the Memorandum of Agreement on Ancestral Domain (MOA-AD) that the Supreme Court eventually declared unconstitutional. What we must remember: the faces in government change but their interests in the peace process with the Moro people remain the same.

The play is as serious as its cause. There is no other play or show that allows audiences to look at the social effects of war on the Moro youth. In the time of record-breaking Twitter-trending Pangako Sa ‘Yo and Kathniel, presidential sister Kris Aquino still yapping on TV and politicians bickering as election season nears, where do we get the chance to look at the aspirations of the Moro youth? A little updating here and there on the play’s text would allow it to become a classic; one that could speak of universal truths even it revolved on a particular event in history.

For a student theater group composed of youth from around 16 – 21 years of age, who performs all roles in productions and earns on their own efforts all costs of production, this production is a decent if not noteworthy feat.

However, the play was shown only twice. Both were technical dress rehearsals that were opened to UP Rep alumni, family and friends due the looming postponement of the show. After two stagings, the group finally announced via Facebook the postponement of the shows, pending the approval of the play’s content by UNICEF Manila that commissioned the production.

At this turn of events or maybe in general, the burden is not in knowing. It is obliviousness that is heavy. Ignorance is not bliss.