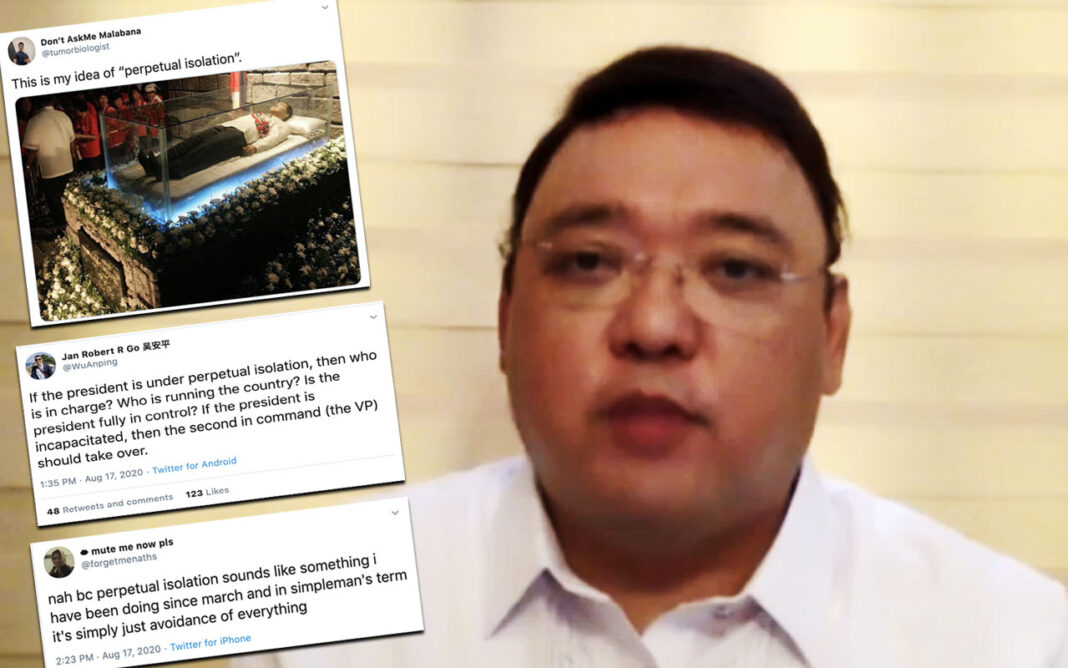 Roque said Duterte had an August 10 meeting with the DILG Secretary. Año announced his positive test results a day later and said he started experiencing flu-like symptoms on August 14.

Journalists are among those who questioned Roque’s “perpetual isolation” statement.

What kind of nation has a leader who needs to be in “perpetual isolation”. Even in the era of digital comms, that sounds like the boy in the plastic bubble. And Duterte isn’t even techie. This makes him even vulnerable to “gatekeepers”. So, just who will be running the govt? https://t.co/ACeCeUQCOO

What does this mean? To be in ‘perpetual isolation’ while in office? https://t.co/yqjbG61Ufz

Many found the statement ‘vague’ and some were alarmed by what it could mean.

What does ‘perpetual isolation’ mean? And a velvet rope? Like a wax figure? ? https://t.co/SdK7oPhC7I

President Duterte is in perpetual isolation? How about a perpetual resignation? Would be better.

If he is in "perpetual isolation" then why does he have to be tested "regularly?" https://t.co/LM8xPA0bsI

So Duterte who is on “perpetual isolation” will make a “right decision” based on his “infinite wisdom” accdg to Roque.

What we need is for Duterte & his minions to be “perpetually banned” from holding public office, for the “right leader” who has “infinite wisdom” to take over.

"perpetual isolation" in the midst of a pandemic is incapacity to perform the functions of the office.

a true leader will not selfishly hide while the nation is suffering.

Roque held the briefing from his home, as he went on self-quarantine following his exposure to Año.

Roque said the Inter-Agency Task Force on Emerging Infectious Diseases (IATF) would meet with Duterte virtually tonight. There had been allegations that Duterte went out of the country this weekend, but Malacañang said these allegation were false.

He also said Duterte would address the public tonight if the IATF meeting finishes early, to announce quarantine classifications of Metro Manila and four nearby provinces that were placed under modified enhanced community quarantine from August 4 to 18.