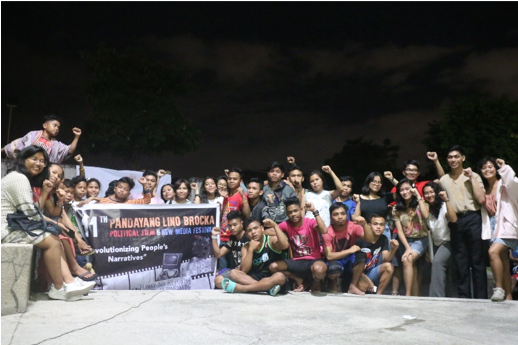 In its 11th year, Tudla Productions’ Pandayang Lino Brocka Political Film and New Media Festival (PLB) commits to showcase Lino Brocka’s spirit as an activist and filmmaker with the theme “revolutionizing people’s narrative”. The film festival, in partnership with the National Commission for Culture and Arts (NCCA), spanned over the month of December.

The film festival is known for binging films of “social and political commentary” closer to the subjects of these films – the workers, urban poor, women, youth – whose toils in life always make opportunities for a passioned or soulful storytelling. While traditional indoor cinemas – more usually in universities – became venues of big opening ceremonies, one would almost always find the film festival on the side of the street or a curb, inside a basketball court, in a picketline, in a workers’ union office, toolsheds or farmers’ resting places and many other similar venues.

In the last 11 years, the film festival committed to holding free screenings, talks and workshops within schools and marginalized communities in Metro Manila and nearby rural areas.

Over the month, the festival held almost 20 film screenings in different schools and communities within and outside Metro Manila, reaching almost more than a thousand attendees.

PLB’s festival director Karen Serada has commented that the theme for this year’s festival is timely as the Philippine Cinema enters its centennial year.

“Just as how Lino Brocka once said that the artist is a committed person that takes the side of any human being violated, oppressed, abused, or dehumanized, we hope that showcasing these films during Philippine Cinema’s 100th year would send a message as to how we filmmakers make films. We aim to probe what is cinema’s purpose and whose narratives are being told in the films we make,” Serada said.

“The films in the official selection show the state of the Philippine society today, challenging the audience and the filmmakers in realizing that cinema’s purpose is not for the sake of entertainment, but for enlightening and empowering the people,” she said.

Serada, having watched all the films during the call for entries and film selection process knows all the films well. She recaps the film program concisely: UMA’s Pagkatapos ng Tigkiriwi deals with the plight of the farmworkers during Tiempo Muerto or dead season. Barug tu Salugpungan tackles the effects of militarization in the lumad communities and their education. Tayo aims to enlighten the people about the struggles faced by a political prisoner. Kontrata depicts the reality of workers in a working environment where ‘endo’ (end of contract) or contractualization is rampant.

“The issues that these films are dealing with resonate with the reality that the majority of us are facing every day,” said Serada.

True to its purpose of showcasing films in marginalized communities, PLB held its culminating activity and awards night in the presence of lumad children and other cause-oriented organizations in the Bakwit School in UP Diliman. [“I am delighted that we will culminate the 11th Pandayang Lino Brocka in your (lumad) presence and in the presence of our filmmakers and media workers. The lumad youth, along with your teachers, are part of the most marginalized sector in our society. Especially in these times wherein disinformation about your plight is more rampant, our organization is emboldened to continue in the years to come, to showcase you and the other marginalized sectors’ stories.]

The festival director also took the time to thank the filmmakers and organizations who submitted entries for the film festival.

[“At the time that the film industry is becoming cliché and profit-driven, PLB thanks all the filmmakers and media organizations who submitted their films to break the norms in the prevailing commercialized film industry so we can continue to show the true conditions of the people and the nation.”]