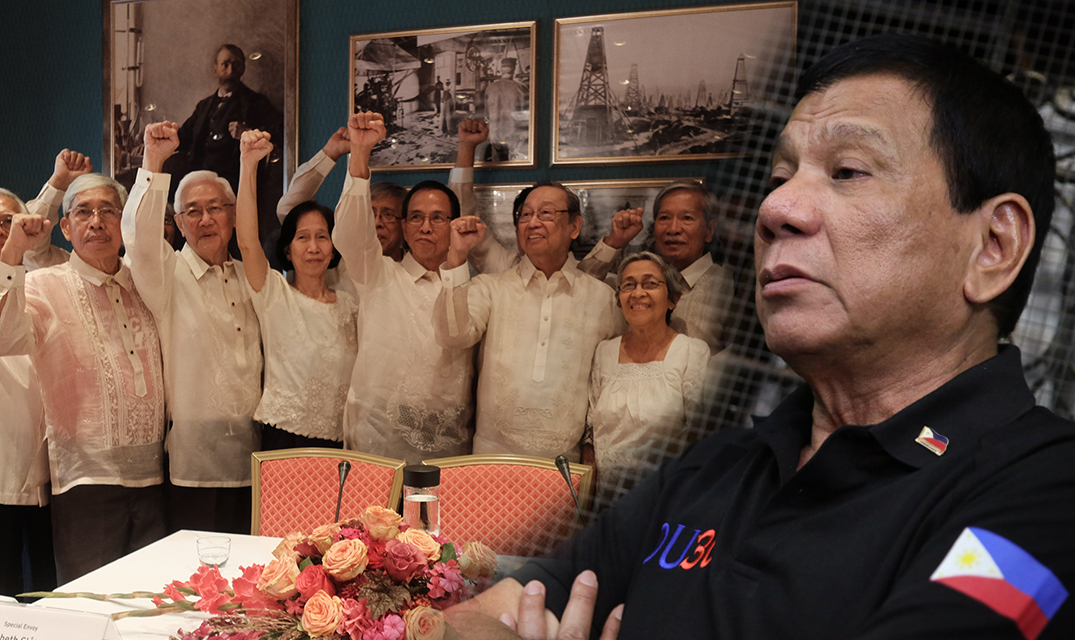 Atty. Edre Olalia gave this reaction to the statement of President Rodrigo Duterte that the latter is ordering the arrest of the peace negotiators of the National Democratic Front of the Philippines (NDFP).

Olalia provided the reasons going against Duterte’s rash pronouncement were that the NDFP consultants are covered by the JASIG, their temporary release under the jurisdiction of the courts and that Duterte and the GRP peace panel has not provided a written notice of termination of the peace talks.

“For those who were released by the government, they should – on their own volition – return here and go back to prison. Or else I’ll be forced to… I’m alerting all the intelligence community to keep track of where they are now. Yung na-release temporarily to talk with us in Oslo they should come back and submit themselves to the jurisdiction of this government because they are still prisoners. Walang pardon. Walang amnesty. Walang lahat,” Duterte said.

He announced his order to the Armed Forces of the Philippines (AFP) and the Philippine National Police (PNP) to arrest the NDFP consultants after visiting the wake of slain AFP soldiers on the afternoon of February 5.

“Come home because you’re wanted and upon your arrival, I will arrest you and place you back in prison. If you don’t want to go back, you’re fugitives. I will cancel your passports and I will inform the international police for an international warrant,” Duterte said.

“All 17 NDFP consultants released from detention last August 2016 are in the Philippines and are not in hiding. Those who took part in the third round of formal talks in Rome from 19 to 25 January 2017 have returned to the country as of 31 January. They are all protected from re-arrest in accordance with the JASIG,” said Agcaoili.

Duterte also canceled the peace talks on February 4 saying, “I will request tomorrow the Philippine contingent to fold their tents and come home.”

The third round of peace talks between the GRP and the NDFP already ended on January 25, 2017.

Duterte threat of rearrest is violation of JASIG, Philippine law

Olalia observed Duterte’s rash order for the arrest of the NDFP consultants is a blatant disregard and disrespect for the JASIG.

Under the JASIG, the NDFP peace consultants are “guaranteed immunity from surveillance, harassment, search, arrest, detention, prosecution and interrogation or any other similar punitive actions due to any involvement or participation in the peace negotiations.”

Olalia said that if only the Philippine government would respect the JASIG, then the NDFP consultants would have not been arrested, detained and charged with trumped-up cases in the first place.

The JASIG or the Joint Agreement on Safety and Immunity Guarantees was signed through the peace talks between the Philippine government (GRP) and the NDFP in 1994. The GRP peace panel under Duterte reaffirmed all the previously signed agreements in the peace talks in their June and August 2016 meetings and formal talks with the NDFP.

“Whether Duterte is mindful of respecting agreements and fulfilling promises in the peace talks, shows how much he is really willing to work for peace in the country,” said Olalia.

The political consultants are all still facing either trumped-up or defective charges of common crimes rather than political offenses that the defense lawyers are trying to get the courts to dismiss.

“This is in continuing violation of the Hernandez Doctrine and of the CARHRIHL. As such, they are not yet convicted and are presumed innocent and cannot per se be rearrested by that fact alone or by operation of law,” said Olalia.

While the GRP peace panel had assured the NDFP of its commitment to release political prisoners in the last round of talks, Duterte’s latest statement on the releases seemed to hold none of that commitment.

“I tried everything. I walked the extra mile, released prisoners, released their leaders so they could go to Oslo to talk. Now no, they want 400-plus prisoners who fought government under a rebellion. That is only given, common sense would tell you, after successful talks, hindi ka magrelease ng mga nasa preso at the beginning. What is there to talk about, kung release ko lahat sila. Why bother to talk?” Duterte said.

The NDFP had reminded the GRP before the third round of talks that the release all political prisoners is in compliance with another peace talks agreement, the Comprehensive Agreement for the Respect for Human Rights and International Humanitarian Law (CARHRIHL).

The latest promise of the GRP on this matter came through the Joint Statement signed by both parties at the end of the third round of the peace talks.

A part of the Amnesty and Releases in the Joint Statement read “The GRP, with the assistance of the defense lawyers, shall expeditiously process the release of all the political prisoners listed by the NDFP starting with the 200 qualified prisoners either through bail, recognizance, pardon or other legal processes in compliance with the CARHRIHL and to allow them to participate in activities and mechanisms of the peace process.”

“These [NDFP] consultants have been put under the effective jurisdiction of GRP courts because they were released only on bail and only for a six-month period. They have been required to secure court permission every time they went abroad to participate in the last three rounds of talks. Their bail renewal is due this month and, as reflected in the Rome Joint Statement of 25 January 2017, both their lawyers and the GRP have agreed to cooperate in this regard,” said Agcaoili.

Olalia said the GRP has formally committed to support this as expressly stipulated in the Rome Joint Statement of January 2017.

Would the GRP peace panel still comply with their peace talks commitment under new, conflicting order of their principal?

Olalia also asserted that, “only the courts which granted them temporary liberty by virtue of cash bails, some effective for 6 months since August 2016 while others rightfully till the duration of the peace negotiations, can act or order whether or not they can be validly rearrested, if at all, and not by the unilateral action of the PNP nor the AFP, much less even by the mere instructions of the GRP President.”

The extension of the effectivity of bail of the NDFP consultants to uniformly be “effective for the duration of the peace negotiations” have been explicitly agreed upon with the GRP even as early as the August Oslo talks, also according to Olalia.

GRP has yet to terminate peace talks

“The peace negotiations have not been properly terminated. According to the Joint Agreement on Safety and Immunity Guarantees (JASIG), the safety and immunity guarantees, and the peace negotiations itself, can only be terminated by written notice given by one party to the other and which would take effect only after 30 days from its receipt,” said Olalia.

No written notice has been given by the GRP to the NDFP to date.

“Since the peace negotiations are not yet properly terminated and the JASIG — which was formally reaffirmed by the Parties in the Oslo Joint Statement of August 2016 are still effective, the NDFP political consultants as such are “guaranteed free and unhindered passage in all areas in the Philippines, and in traveling to and from the Philippines in connection with the performance of their duties in the peace negotiations,” said Olalia.

While safety guarantees are co-terminus with the talks, Olalia said that the immunity guarantees hold even after the JASIG and peace negotiations are effective precisely because that aims to protect them and encourage their participation or involvement in the peace process.