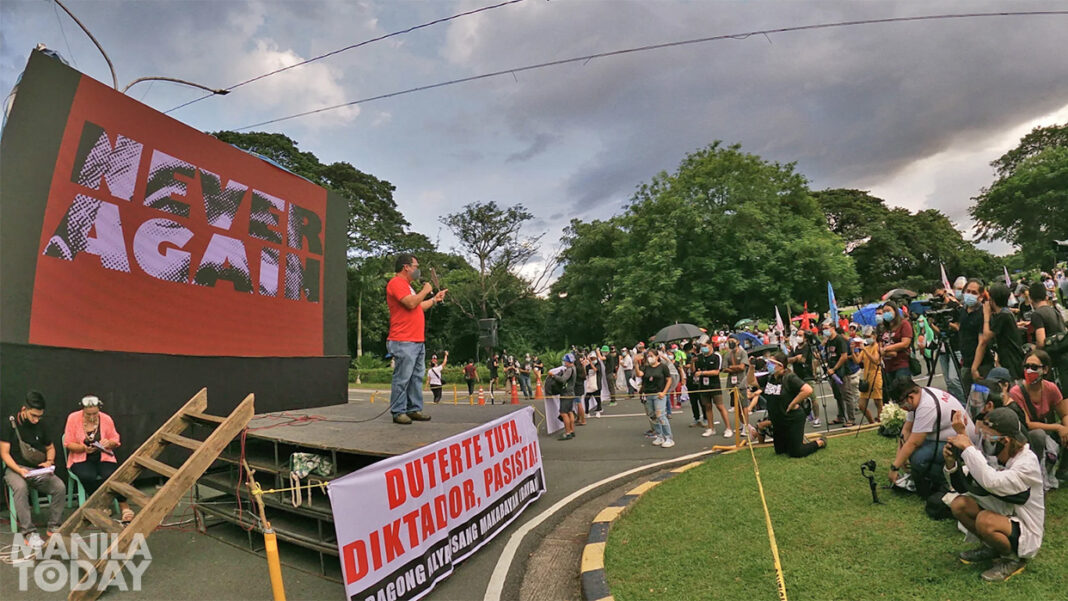 Progressive groups from different sectors trooped to the University of the Philippines Diliman in Quezon City in commemoration of the declaration of Martial law by the dictator and late President Ferdinand Marcos in 1972.

The groups recalled the assaults against democratic rights during Marcos regime and claimed that the former dictator is similar to the current administration under President Rodrigo Duterte.

The 48th year of Martial Law declaration is greeted at a time the international community – in the European Commission and in the United Nations Human Rights Council – are taking note of the persistent and intensifying human rights violations in the country since Duterte came to office, from the bloody war on drugs to the extrajudicial killings of activists during the pandemic and the more than six months lockdown and varying community quarantine protocols in the country.

The groups cited the Anti-Terror Law as an imposition of an undeclared state of martial rule while the country struggles in the face of COVID-19 pandemic.

Furthermore, according to them, militarization and implementation of various anti-people policies have also remained prevalent in the current administration.

[In the time of Marcos, killings were referred to as “salvaging”. In the time of Duterte, it is called “extrajudicial killings”. Nonetheless, these are thousands of people who have been slain no matter how it’s called.]

Never forget, no to revisionism

Atty. Colmenares, who was also a Martial Law survivor, reiterated that the proliferation of human rights violations is one of the similar characteristics in the both of the administrations of Marcos and Duterte.

Colmenares dubbed both presidents as “trapo” or traditional politicians, those who made promises in the course of their election campaigns but had no intentions to fulfill them, and allows the prevalence of the opposite of their promises, such as corruption. which only lead to the persisting crisis in economy, joblessness and worsening poverty.

On a more positive note, Colmenares stressed that it is the key role of the people in nation building and charting the nation toward true democracy and freedom that is also similar to before and will remain unfaltering.

[The demands of the people are getting stronger, the same power in the nation’s struggle during the time of Marcos. And so here is our dictum, Never again to Marcos’ Martial Law, Never Again for Duterte’s Dictatorship.]

[Let us continue to arouse, organize, and mobilize. Let us keep being determined. It is okay to rest but we shall be persistent for this fight is not of our interest but of the many.]

The protest concluded with the burning of an effigy in the representation of a novel coronavirus bearing the face of President Duterte.