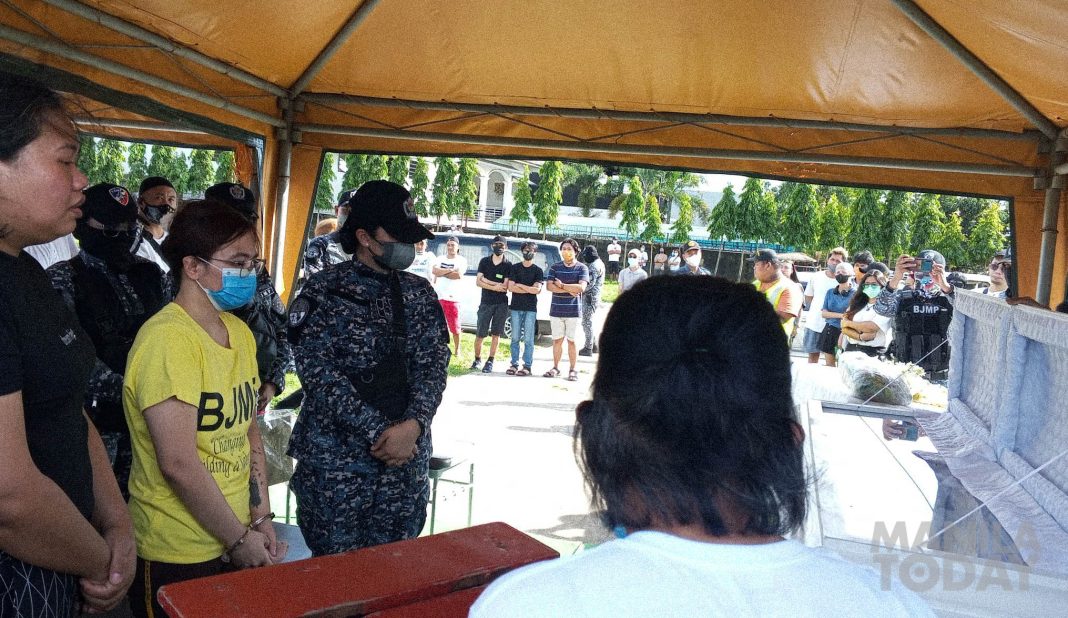 On November 9, political prisoner Romina Astudillo of the Human Rights Day 7 (HRD 7) could have gotten a long, solemn, proper and solitary grieving for her deceased mother Phoebe had she not continued to face the charges against her. But she was only given around two hours to attend her mother’s burial.

Romina’s colleagues would call her Sham or Shami; to her family, and that hour, she was Mayang, her mother’s daughter.

There were at least 25 armed jail guards from the Bureau of Jail Management and Penology (BJMP) and police escorts who escorted Mayang. She was handcuffed and guarded by five BJMP personnel.

Mourners and her family had waited for Mayang all morning at the house. But she was brought directly to the cemetery. The escorts also waited for the funeral procession to settle, insisting that she would only be brought out when the interment started.

But of course, there were goodbyes that had to be said. Mayang could not contain her tears, wiping her eyes through her face mask with her cuffed hands as her siblings shared messages of farewell. The family said they were not used to seeing their youngest sibling crying.

She would then use as much time as she could to say her goodbyes, sharing she was not even sure she would really be able to attend or to be able to share a eulogy. Why would she think that when the court granted her motion for furlough? Well, the last memory of a furlough of a political prisoner prior to this was that of Reina Nasino’s short, heavily-guarded visit to the wake and burial of her three-month old daughter River.

Bad situations and unfortunate circumstances that came to pass tore their mother away from them, Mayang said. And her incarceration and her mother’s terminal illness, diagnosed in 2019, had added undue sorrow and grief.

[Ma, like what I know, like what my life as an activist is. I told her, Ma, let’s keep on fighting. We can overcome this.]

She encouraged the mourners to go home to their families—as she would go back to jail—and not hesitate to always show their love because one would not know how much time is left to do so.

The granted furlough motion is only but a small triumph, according to Karapatan NCR. Mayang could have been released, or perhaps she should not have been imprisoned along with her co-accused Mark Ryan Cruz, Jaymie Gregorio, and Joel Demate of HRD 7.

Three of the HRD 7, Manila Today editor Lady Ann Salem and labor organizers Rodrigo Esparago and Dennise Velasco, were released upon the dismissal of firearms and explosives charges against them.

But the rest of the HRD 7 continue to languish in jail, waiting that the courts handling their own cases may find their way to the evidence and resolution that have already led to the release of the three. They were imprisoned for almost two years now.

The warrants against the seven came from a single police narrative that they were part of a gun-running syndicate. But state authorities would red-tag them as New People’s Army members (despite all the while working and living within the metro) and high-ranking members of the Communist Party of the Philippines shortly after their arrest, revealing the political nature of their cases.

On April 22, 2021, just over a month and weeks after Salem and Esparago’s release, the Quezon City court denied the motion to quash warrant and suppress evidence filed by the legal counsel of Mayang along with Cruz and Gregorio.

The next hearings on Mayang’s case, along with co-accused Cruz and Gregorio, were not until December 6 this year and February 9 next year. From now until then and the days and weeks in between the hearings, they remain in jail in what rights groups said were only trumped-up charges.