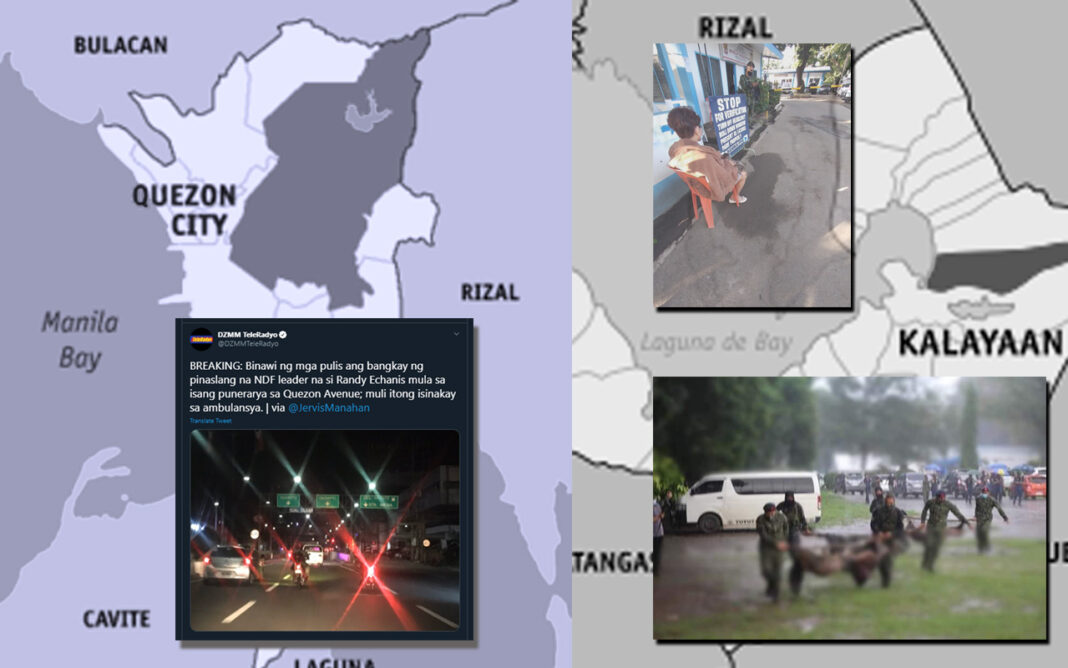 Late on August 10, the police took back the remains of slain peasant activist Randall Echanis.

Anakpawis legal counsel Atty. Luchi Perez said that the police who took away Echanis’ remains were asking for a ‘release order.’ The Criminal Investigation and Detection Unit of Quezon City Police District (QCPD) required a release order to be issued by the police station or the funeral parlor.

But this was after the family had identified Echanis. This was after the Philippine National Police (PNP) medico-legal personnel had examined the remains for issuing the death certificate which Perez signed for the family of Echanis via the authority of a Special Power of Attorney. The Pink Petals funeral homes in La Loma, Quezon City then released the remains and the family was able to take it back to the funeral homes of their choice.

The police, however, took the remains back to Pink Petals Funeral Homes.

The police continue to hold Echanis’ remains in Pink Petal Funeral Homes because according to them ‘the identity has yet to be determined.’

Even after the family and the groups of Echanis had announced the death of the long-time agrarian reform advocate, the QCPD went on to insist that Echanis was not one of the two killed in a rented house in Novaliches past 1am, but a Manuel Santiago from the identification cards taken from the scene.

The face of the killed Echanis was posted in Anakpawis’ Facebook page—one that undeniably looked like ‘Ka Randy, as family, friends and colleagues revere him. That, or he has a doppelganger or identical twin, mocked National Union of Peoples’ Lawyers President Atty. Edre Olalia on the police’s insistence that the dead inquestion is not Randall Echanis.

Meanwhile, Karapatan Timog Katagalugan (Karapatan TK) said police elements from the PNP Police Regional Office 4A (PRO4A) and PNP Laguna have yet to give the remains of four slain rebels in Kalayaan, Laguna to their families, despite their presence and documentary proof supporting their claim as immediate family.

According to the family and Karapatan TK, the police have been delaying the release of the remains of Dioscorro Cello, Rey Masinas, and Alex Perdeguera to their immediate family by keeping them in the dark on the whereabouts of their loved ones’ remains.

“It is disappointing, but not surprising, that the PNP seeks to make it difficult for the family of Kalayaan 4 to claim their deceased relative,” said Kyle Salgado, Karapatan TK spokesperson.

A similar fate was also experienced by the family of Mario Caraig, another NPA fighter killed by police forces last August 8. According to the police, Caraig started a gunfight as they were serving a search warrant.

But according to witnesses’ stories gathered by Karapatan TK, Caraig was recovering from the deep wound in his arm from the August 4 clash in Kalayaan, Laguna, while unarmed and had no ability to fight. This would render him hors de combat, or unable to fight, which has recognized rights under international humanitarian law. The group insisted they should have instead arrested or taken Caraig under custody if they would observe international humanitarian law.

Karapatan TK lamented that Caraig’s family was also left hanging earlier today as police stations were passing over the responsibility of turning over Mario’s remains.

“Even with the presence of Mario’s sibling, police officers from PNP Laguna still required a Certificate of No Marriage and the death certificate of Mario’s father, a stark denial of his presence as immediate family,” said Karapatan TK.

The rights group is concerned that the very reason for the delay of releasing the remains to the families is the big bounty that President Rodrigo Duterte promised. According to police and military issuances, Caraig has a Php 4.3 million bounty on his head while Cello has a Php 3.8 million reward on his head.

“Meanwhile, Virgilio Asedillo, his daughter and pregnant mother Chloe Asedillo, and Chloe’s husband are reported to be held by police. According to sources, they were last seen in Kalayaan Municipal Police Station as they were accused of harboring Caraig. They were allegedly fetched by officers from the provincial investigation bureau of PNP Laguna,” added Karapatan TK.

Salgado expressed concern on the welfare of the Asedillo family under police custody.