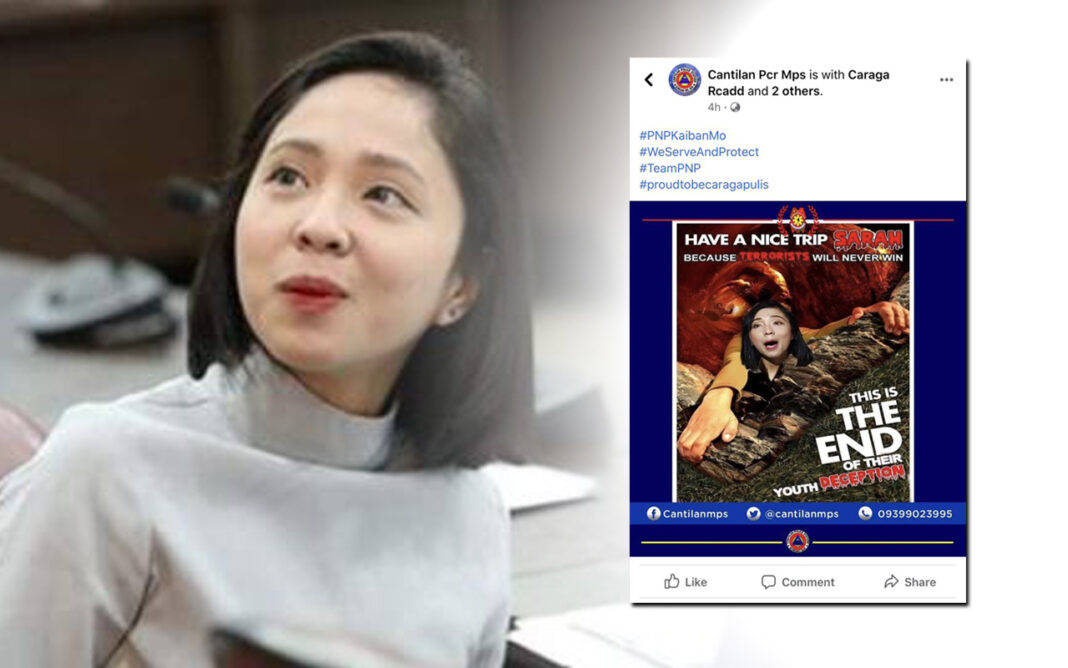 A unit of the Philippine National Police (PNP) was called out for ‘red-tagging’ and ‘terorrist tagging’ Kabataan Partylist Sarah Elago, only three days after the televised Senate hearing on red-tagging.

On November 6, Cantillan Police Station in Surigao Del Sur posted on Facebook what many called ‘distasteful’ and a badly-designed image of Elago’s head imposed on a body hanging on a cliff leading to a fire-pit abyss that seemed to characterize an image of hell, with the text ‘Have a nice trip Sarah because terrorists will never win.’ The name ‘Sarah’ and ‘terrorists’ were rendered in bloody font type face.

The post has since been deleted. PNP chief Police General Camilo Cascolan says he has ordered a probe on the new case of red-tagging.

The deleted post appeared to be among a barrage of posts from PNP municipal station on November 6 against the CPP-NPA-NDF that started with this post at around 2:30pm.

The first in the series said the ‘red-tagging victim card’ is used as a tool used by national democratic activists to shield and protect the CPP-NPA-NDF.

The posts against the CPP-NPA-NDF were seen to have abated after the post on Elago was exposed and brought to national attention, with the PNP unit reverting to their usual posts of road safety, Bible verses, Covid-19 updates and reposting of the PNP Chief’s 9-point agenda.

A few new posts still on the subject of the youth and red-tagging include a post endorsing the character of NTF-ELCAC star witness Jeffey Celiz in the Senate hearing on red-tagging on November 3.

Many government agencies involved in the hearing and Celiz turning state witness – National Intelligence Coordinating Agency (NICA), Department of National Defense and Department of Interior and Local Government, among others – failed to have mentioned that Celiz was named a drug personality by the president in 2016. He also worked for Iloilo City Mayor Jed Mabilog, who also named a drug personality then and who fled the country in 2016 while Celiz went missing. Celiz resurfaced only now as witness against the ‘fronts’ of the CPP-NPA-NDF. Celiz claimed in the hearing, also only brought up towards the end, that his alleged drug links was a ‘cover’ for his intelligence work to expose the CPP-NPA-NDF.

Another post is a quote from Relissa Lucena, the mother of activist Alicia, whose cases of habeas corpus in the Supreme Court and kidnapping in the Department of Justice against various activists charged have been dismissed.

Netizens decried the ‘terrorist-tagging’ of Elago.

The ‘anti-terrorism law’, with 37 challenges in the Supreme Court pending, will allow terrorist tagging by proscription that needs a decision of the court and by designation that only needs the approval of the Anti-Terrorism Council made up of the same military officials and ex-military officials in Cabinet in the Senate hearing on red-tagging.

In the Senate hearing, military officials including NTF-ELCAC spokesperson and SOLCOMM Commander Antonio Parlade, Jr. who has been in a rampage of calling out celebrities following actess Liza Soberano’s participation in a webinar by Gabriela Youth, and ex-military in President Rodrigo Duterte’s cabinet denied red-tagging activists.

They called this instead to be ‘truth tagging,’ as the NICA Director General Alex Paul Monteagudo said they are ‘exposing individuals which we have validated as CPP-NPA-NDF members and front organizations.’ The evidence on this has yet to be seen and scrutinized, aside from the lack of the anti-subversion law in the country that once outlawed the Communist Party of the Philippines

Like Elago, netizens have also likened Parlade’s calling out of Soberano to a death threat.

“Liza Soberano, there’ s still a chance to abdicate that group. If you don’t, you will suffer the same fate as Josephine Anne Lapira @ELLA, former Deputy Secretary General of Gabriela Youth of UP, Manila and defender of women’s rights, even against sexual predators amongst her comrades in the NPA unit she joined which is clearly stated in her handwritten letter addressed to a certain @EMIL,” Parlade supposedly said in support of Soberano against the #BoycottLizaSoberano topic on Twitter the same time she was at the webinar.

The #BoycottLizaSoberano was thought to be the work of trolls given Soberano was speaking for the rights of abused women and girls on a webinar held for the occasion of the International Day of the Child. There were also posts linking Gabriela Youth to the Communist Party of the Philippines, much of the same content as the NTF-ELCAC posts and Parlade’s comments. The hashtag was soon hijacked by K-pop fancams, or videos of Kpop idols used to divert the attention away from whatever that original tweet set out to achieve, the same response given to tweets or trending topics made to smear or attack #BlackLivesMatter.