“At around 10am this morning (July 26) the Bulacan Police Provincial Office confiscated copies of Pinoy Weekly from the office of Kalipunan ng Damayang Mahihirap (KADAMAY) in Pandi, Bulacan claiming our publication is illegal and teaches people to fight the government. This Police operation follows the arrest of a local leader of Kadamay in the same area,” Pinoy Weekly relayed on its Facebook post.

In photos that Pinoy Weekly obtained, it can be seen one uniformed personnel and another in civilian clothing hauling stacks of newspaper outside. These were then loaded and filled the police vehicle’s trunk.

The publication also obtained a copy of a letter the police ‘forced’ Kadamay Pandi members to sign.

Pinoy Weekly shared that members of Kadamay Pandi who were present during the raid in their office said police personnel prepared a letter stating copies of Pinoy Weekly, described as “subversive documents”, were “voluntarily surrendered.” They also claimed they were threatened by the police to sign the letter (in photo) and was told to surrender the copies of our publication or else, “may mangyayari” (“something will happen.”) 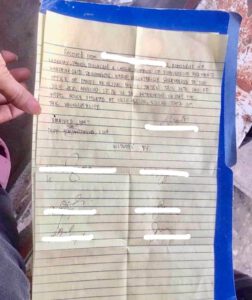 The night before, the police also arrested without warrant and detained one of Kadamay leaders Rose Fortaleza. The morning after, police raided the housing unit where Fortaleza lives and where the copies of Pinoy Weekly were found.

“It is totally ludicrous for the police to justify what, to our mind, constitutes armed robbery by claiming, falsely, that Pinoy Weekly is illegal and teaches people to fight the government,” said NUJP in a statement.

The group asserted that Pinoy Weekly is a perfectly legal and legitimate news organization, just as are all the outfits that belong to the alternative media.

“This incident is a very clear example of the dangers the Filipino people face from the Anti-Terrorism Act of 2020,” NUJP added.

“To claim the publication as “illegal” and use it to arrest a citizen is a blatant attack on press freedom. We call on the PNP and state forces: stop the attacks against the alternative media!” said Altermidya.

Pinoy Weekly is a member of Altermidya and National Union of Journalists of the Philippines. It is an online and printed news outlet that publishes stories, images and opinions of the marginalized sector and is published by the PinoyMedia Center Inc., a Security and Exchange Commission-registered non-profit organization, founded in 2002.

Police Regional Office 3 in San Fernando, Pampanga said in a report that Kadamay leaders asked the police to go to their house and surrender the “subversive” documents. The report also confirmed that Fortaleza along with one Buenavil Fortaleza had been arrested the midnight before when they were found “walking casually  at the sidewalk without facemask and were holding pamphlets/ propaganda materials of ‘PINOYSTREET .ORG. Instead of yielding to authorities, the duo resisted and tried to elude arrest.”