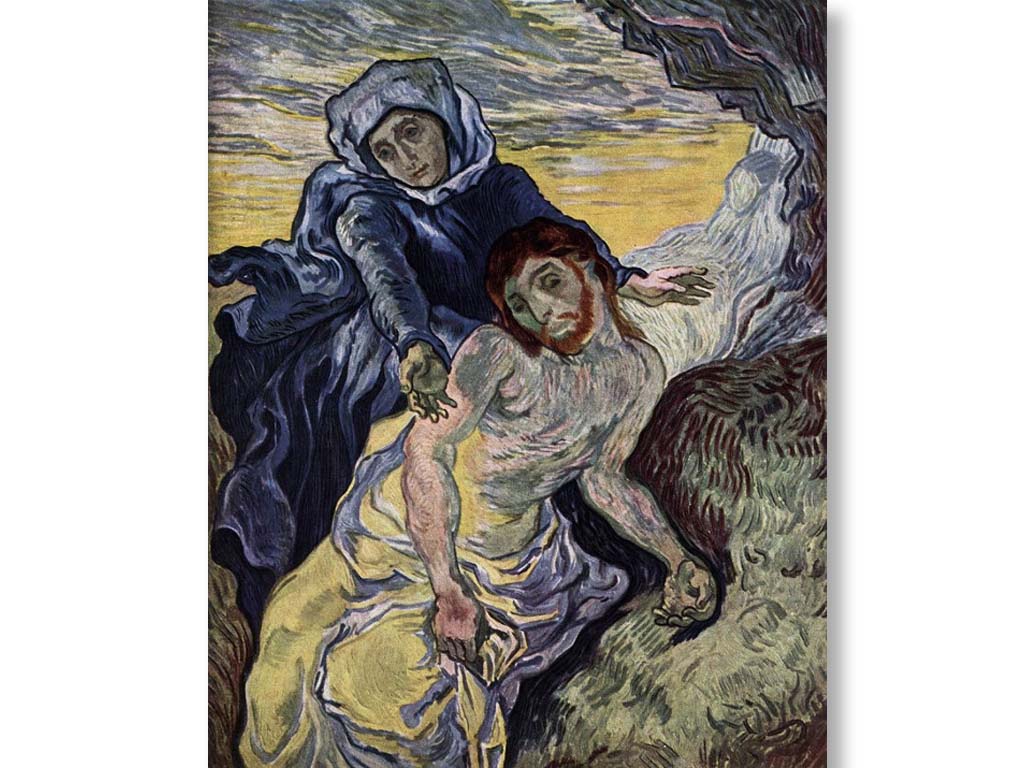 The ongoing wave of climate protests conducted by the youth around the world reunites me to the least famous painting of the most celebrated painter in the world: Van Gogh’s Pietà which I saw a couple of years ago in Palazzo Strozzi in Florence. For some strange reason the painting evokes something of the nature of these protests. Albert Camus:

“There is but one truly serious philosophical problem and that is suicide.”

What was acknowledged by Camus as a serious philosophical problem has become today a universal, existential possibility.

A grave system of profit-making (neo-liberalism, corporate capitalism) elevated by the culture of cut-throat individualism has triumphantly compelled our world on the brink of suicide. The past decades of restless industrial activity have rendered the natural environment to which we owe our existence almost uninhabitable, threatening the survival not only of our own species but a million other species as well. The beginning of the year 2020 erupted with Australian wildfires devouring more than 5.8 million hectares of land, pushing several species into complete extinction.

The immensity of the disaster that awaits us cannot be remedied by traditional bureaucratic conferences between futile world leaders and self-indulgent financiers who take the nightmarish scenario with infinite reluctance and perfect irresponsibility. Despite the rigorous scientific publications and the unusual verbal protests of numerous scientists from all over the world, our leaders are still inclined to formal procrastination while an on-going obliteration of biodiversity and ecosystems take place in front of our very eyes.

“We are in the middle of a climate breakdown,” said the young activist Greta Thunberg, “and all they can talk about is money and fairytales of eternal economic growth.”

I am in Florence at Palazzo Strozzi where Van Gogh’s Pietà is momentarily displayed for an exhibition called Divine Beauty. I am in a room where the painting in question is hanged, sitting on a cushioned bench surrounded by circling museum visitors. In front of me stands a couple who’s been observing the painting for more than a quarter of an hour now. They have occupied the front space which makes it impossible to even glimpse the painting. Both man and woman are heavily dressed in black winter clothes as though they had come from a faraway place to mourn a dead. Behind me, a museum guide scolds a teenager for talking loudly over the phone. A group of Japanese tourists has entered the room led by a young Italian lady who speaks perfect Japanese. The unmoving couple begins to amuse me. They do not flinch but, elbows touching, they exchange words between them like spies and lovers do, tilting their heads in secret whispers. It’s past twenty minutes now. It’s as though they were the former owners of the painting. No other paintings of eminent stature in the same room seem to interest them. I wait with amusement and irritation until finally, to my relief, they leave, their winter shoes making a click-clack sound on the floor. And for a while their absence has instilled a particular ache in the room.

Between where I am sitting and the wall on which the painting is hung a distance of around five meters. Within this range the image of the Pietà looks like a landscape painting. Maybe because its size, 70x63cm, tricks one’s vision from afar. The painting is after Delacroix’s Pietà who along with Rembrandt Van Gogh intensely admired. They were the only painters, wrote Van Gogh, to have painted Christ the way it had to be painted. The only time Van Gogh decided to paint the figure of Christ he had chosen the theme of the Pietà.

The Pietà is one of the most celebrated themes in the history of Western art: an almost inescapable subject for artists since the Middle Ages down to the 20th century. The Renaissance and Baroque masters—Botticelli, Bronzino, Domenichino, Carracci, Van Dyke, El Greco, and Michelangelo have rendered the image of the Pietà its universal acclaim. Their versions of the Pietà are distinguished by their majesty, technical mastery, authoritativeness, and a sense of spiritual superiority that any spectator who sees their work for the first time is dauntingly aggravated by a stifling admiration. Their version exercises a kind of aesthetic intimidation. I have visited several times Michelangelo’s Pietà in Saint Peter’s Basilica in the Vatican and every time I was filled not with pathos but with a seething sense of awe by the slave-like labor the artist put into details of the work. The tendency to empathize with the theme always fall short.

Before Van Gogh’s Pietà all the monumental pieties and official art declarations fall apart. The steadfast aestheticism and religious glamour in other well-known versions are seemingly antithetical to what Van Gogh is trying to portray. Perhaps it is this humbling quality that makes this work the least known, and also the most rebellious version of the Pietà in the history of Christian art. From the size of the painting to the way it is painted Van Gogh’s Pietà leads us to a different direction. Let’s leave the museum for a awhile and go to the streets.

The climate protests articulate the longing to connect the commitment between human species and its natural world interrupted by a system which claims no other commitment than that of exploitation and making profits. To connect, in the contemporary sense, is to acknowledge what we have lost under this ferocious monetary system. Perhaps the greatest conceit the Industrial Revolution has given us is the destruction not only of the physical world but of the memory much older than the Industrial Revolution that we humans depend on and belong in nature. Alongside the obliteration of that memory is the development of  an orthodoxy  which contends our separateness from nature; that nature is an external matter thus we take an impersonal, disengaged view in relation to it. History is fully aware of the consequences of this orthodoxy. The indigenous cultures which have been marginalized and made extinct throughout long centuries of colonization and exploitation have warned us from the beginning of the danger of losing our ancestral memory:

Go back to the museum, to the painting.

Christ’s face resembles the withering disc florets of a sunflower Van Gogh often painted, his contorted body like a wheat field at dusk; the upper body seems to be rising out of a cave and simultaneously the upper left side of that body is returning to the soil. The mother’s dress has the appearance of the night sky (remember the Starry Night) and the veil that covers her head belongs to the horizon. As in nature nothing is static in this painting. With Van Gogh’s brushstrokes everything is held in the process of becoming—flowing, merging, returning, rising, falling. Mother and Son, and the landscape enveloping them become indivisible, indistinguishable—inseparable. A native American Chief weaves this image in these wise words:

“Men must be born and reborn to belong. Their bodies must be formed of the dust of their forefather’s bones.”

Almost if not all versions of the Pietà portray the Mother holding if not embracing Christ. A defeated act of possessing. In Van Gogh’s Pietà, nothing is intact, nothing is grasped, possession is slipping away. Van Gogh bestows in the Mother the tenderness of the act of letting go. An act which goes against a society subservient to the power and impulse of possessing, amassing, acquiring, consuming, and exploiting. In her sunlight-clear poem entitled Of The Empire the wonderful poet Mary Oliver describes this mean world of possessing:

“We will be known as a culture that feared death
and adored power, that tried to vanquish insecurity
for the few and cared little for the penury of the
many. We will be known as a culture that taught
and rewarded the amassing of things, that spoke
little if at all about the quality of life for
people (other people), for dogs, for rivers. All
the world, in our eyes, they will say, was a
commodity. And they will say that this structure
was held together politically, which it was, and
they will say also that our politics was no more
than an apparatus to accommodate the feelings of
the heart, and that the heart, in those days,
was small, and hard, and full of meanness.”

Christ’s death is felt less as an overwhelming consequence of suffering and pain but rather as an inevitable affirmation of life which is only possible through dying. There is no pathos, no emblematic transfer of guilt towards the spectator but a calm commemoration of our shared destiny which is death. In Van Gogh’s Pietà death is a kind of belonging. Our life belongs to the soil as much as it belongs to heaven. We are of the earth.

This hunger is not a sentimental reimagining of a lost paradise or a return to this or that state of blissful innocence or mythical grace. Rather it is a faith deeply instructed by ancestral appreciation and indigenous commitment engaged in a continued struggle to approach that wisdom anchored in the climate protests, embodied in these words of the Lakota war chief Crazy Horse:

“Treat the earth well: it was not given to you by your parents, it was loaned to you by your children. We do not inherit the Earth from our Ancestors, we borrow it from our Children.”

Carlo Rey Lacsamana is a Filipino born and raised in Manila, Philippines. Since 2005, he has been living and working in the Tuscan town of Lucca, Italy. He regularly contributes to journals in the Philippines, writing politics, culture, and art. He also writes for a local academic magazine in Tuscany that is published twice a year. His articles have been published in magazines in the U.S., Canada, the U.K., Germany, India, and Mexico. Visit his website or follow him on Instagram @carlo_rey_lacsamana.

Honey, Meat, and Water (the abuses of travel and the wisdom of indigenous peoples)