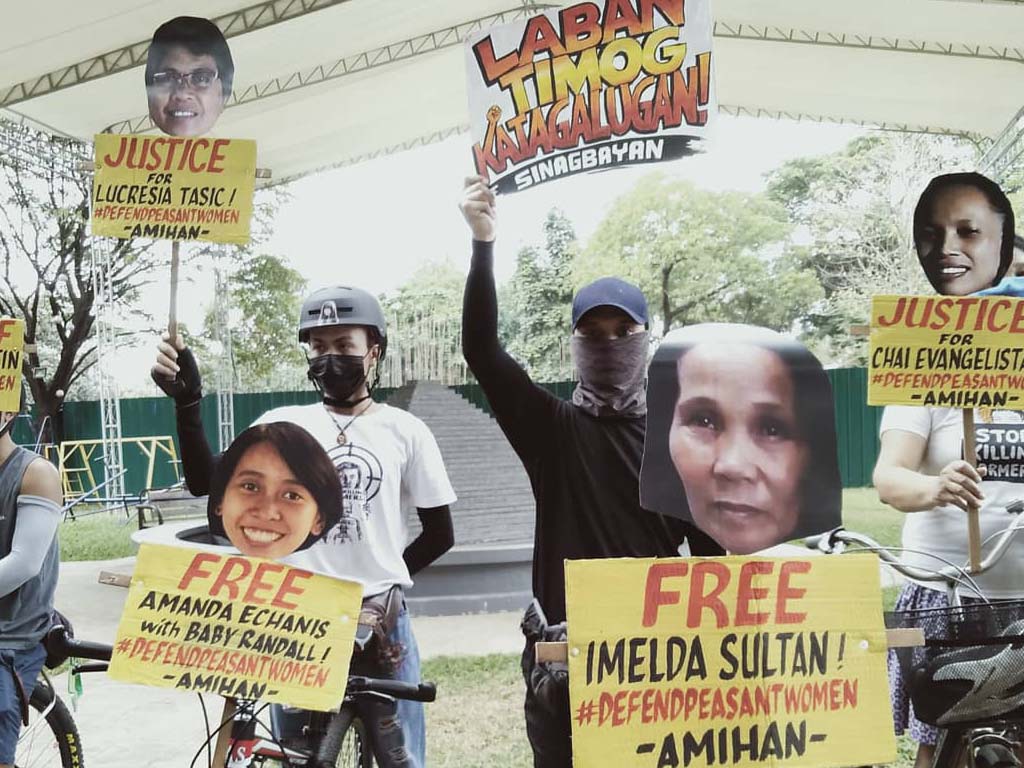 The attacks experienced by the members of peasant women group Amihan’s national network come in the form of red-tagging, imprisonment over criminal charges that are trumped-up or extrajudicial killings. These are very much like what many persecuted activists and government critics experience under this administration.

On June 8, Amihan also found its bank accounts frozen due to the inclusion of the group in the ATC’s terrorist list in Resolution No. TF-38, Series of 2021 dated May 5, 2021 and the Anti-Money Laundering Council’s subsequent freeze order.

Amihan said the political persecution and attacks suffered by its members are in reprisal for their fight and stance against landlessness, neoliberal policies such as the rice tarrification law, and rights abuses.

These include presidential policies like the more than two years Martial Law in Mindanao that started in May 2017.

Duterte’s Memorandum Order 32 issued in November 2018 was assailed by rights groups as de facto Martial Law in Negros, Samar and Bicol, while also coinciding with the Martial Law in Mindanao.

The president’s Executive Order 70 issued in December 2018 instituted the whole-of-nation approach in the government’s counterinsurgency program and as its “national peace framework.” This meant solving the half-century-old civil war in the countryside would involve not only armed elements of the government but also civilian agencies such as the social welfare, agrarian reform, and education departments. The order created the National Task Force to End Local Communist Armed Conflict (NTF-ELCAC)

All these policies seemed like a prelude to the much-contested Anti-Terrorism Law enacted in 2020 amid the pandemic and lockdown. The law is seen as a “wholesale and systematic violation of fundamental freedoms and constitutional rights.” It allowed terrorist-tagging without a court order and by the determination of the Anti-Terrorism Council (ATC), freezing of assets and warrantless arrests prior to giving the accused any forum to defend themselves.

Various levels of government and various government officials have used the government’s platforms and resources to tag activists or groups as members or supporters of the Communist Party of the Philippines (CPP) and the New People’s Army (NPA).

Poor but organized (belonging to a group that advocates for their rights or demands) peasant women are among those who are usually red-tagged by various state agents.

On May 27 last year, several red-tagging posters were displayed along the highway in Mallig, Isabela. The said posters tagged Renato Gameng of Danggayan Dagiti Mannalon iti Isabela (DAGAMI) and other peasant leaders as alleged ‘recruiter and protectors of the NPA.’ Aside from DAGAMI, the organizations red-tagged were the Isabela chapters of AMIHAN and Ugnayan ng Manggagawa sa Agrikultura.

Peasant women activists from Cagayan and Isabela also reported being red-tagged around the same time the Anti-Terrorism Law was passed in July last year. Among the red-tagging incidents were ripped sacks hanging on trees naming activists and labeling them as members of the NPA. Flyers labeling activists as recruiters of the NPA were distributed in Tuguegarao City.

Peasant women leader Jacqueline Ratin were among those red-tagged through sacks and flyers. Photos of Ratin, National Vice Chairperson of Amihan and Chairperson of Amihan-Cagayan, and others were included in tarpaulins hanged along the road of Barangay Masical, Baggao, and highways of Iguig and Amulung municipalities on April 23, 2021. Written in the banners were “terrorist recruiters”, “plague of the town” along with their names and positions in their organizations. Similar tarpaulins were seen two days later in several villages and towns.

The home of Leonisa Taray, Chairperson of SABAKAN-Amihan Bohol, in Brgy. Matin-ao, Carmen was searched on March 29, around 5 am, by around 15 policemen led by the Carmen police chief. The police bore a search warrant for firearms and ammunition, but the kind and caliber were not specified in the warrant. None of these were found in her home.

Julie Marcos of Amihan Cagayan was forced by PNP Amulung on March 29, 2021 to sign a document saying she is surrendering as a member and supporter of the CPP and NPA, as reported by Karapatan Cagayan Valley. Signing the document was said to be a way of clearing her name and also getting other members of the farmers’ organizations to surrender and clear their names.

Out of the 80 peasant women political prisoners in the country, 63 were arrested under the current administration.

Many peasant women arrested and imprisoned were charged with illegal possession of firearms and explosives, the usual cases slapped on activists by police operatives who conducted raids on homes and offices and are usually accused of planting evidence. Many of these charges have been dismissed, but only after months or years of an activist’s incarceration. Some others were charged with rebellion, while one was convicted of murder.

Imelda Pasinabo Sultan and Ma. Lindy Perocho were among the 57 arrested in Negros Occidental province through simultaneous police raids on progressive groups’ offices and activists’ homes from October 31 to November 1, 2019.

Raids were conducted via search warrants issued by Quezon City Executive Judge Cecilyn Burgos-Villavert on October 30, yielding firearms and explosives that the accused decried as planted by the police.

Genalyn Avelino, chairperson of their grassroots organization Samahang Kababaihang Magsasaka sa Mindoro, had been red-tagged prior to her February 24, 2021 arrest. She had been active in the land struggle in the disputed Saulog estate in Barangay Adela, Rizal, Occidental Mindoro. She was also the former chairperson of Samahan ng Magbubukid sa Kanlurang Mindoro and a National Council Member of Amihan. She was arrested on a rebellion charge.

Moreta Alegre, 74, was arrested in 2005 and convicted in 2009 on ‘trumped-up murder charges’ with her husband Jesus and son Selman, ensuing from her family’s decades-long dispute with a landlord in Barangay Taba-Ao in Sagay, Negros Occidental. From the Sagay prison, she was transferred to the Correctional Institute of Women in 2009.

She suffers from hypertension and arthritis and her case has been repeatedly appealed to government for humanitarian release, especially during the threat of Covid-19 in the over-congested Philippine jails. Her husband Jesus, 75, succumbed to his ailments and poor health on June 13.

Prisons have been decongested amid the pandemic, with former Chief Justice Diosdado Peralta reporting in February this year that more than 122,000 have been released since the lockdown in March 2020. However, even elderly or sick political prisoners have not benefitted from this program of the Supreme Court.

At least one of those imprisoned has died in jail, renewing calls from human rights groups for the humanitarian release of sick and elderly prisoners.

On May 4, 2020, Adelaida Macusang died of kidney failure and cardiac arrest. She was 61.

Macusang had been diagnosed with hypertension and enlargement of the heart before her arrest.

She was an organizer and member of Montevista Farmers Association (MONTEFARMA). Macusang was arrested by military elements in her residence in Barangay Camansi, Montevista on March 24, 2018, during the Martial Law in Mindanao.

She was charged with illegal possession of explosives and was detained at the Tagum City Provincial Rehabilitation Center.

The nation is still reeling from the death of Baby River, the three-month-old daughter of political prisoner Reina Nasino, in September 2020.

But then came the death of Baby Carlen on Valentine’s day this year. Baby Carlen, only around six weeks old, died of an infection in the lungs and blood. She was born with a cleft palate and was separated from her mother three days after her birth.

Her parents, Nona Espinosa and Adidas Acero, were arrested on September 20, 2020 along with seven other peasant activists in Guihulngan City, Negros Occidental.

Espinosa was arrested for purported murder, robbery, theft, and frustrated murder charges. Acero was arrested for alleged illegal possession of explosives, firearms and ammunition. The military lauded their arrest after accusing them of having participated in a July 2017 ambush of then-Guihulngan City police chief Police Supt. Arnel Arpon and five of his men.

From the time Duterte rose to the presidency in July 2016 up to the end of May this year, Amihan said that 42 peasant women were killed out of 326 peasants killed extrajudicially.

Like the murder of the elder Echanis during the lockdown and curfew hours, a high-profile case, no perpetrator has been apprehended or brought to justice.

Ana Mariz “Chai” Evangelista and her husband Ariel were among the nine killed on March 7, 2021, also known as “Bloody Sunday.” They were killed in their Nasugbu, Batangas home.

Police alleged that weapons and grenades were found during the operations and that the activists were killed for resisting arrest or “nanlaban”, an old, discredited claim of police in Oplan Tokhang operations and also a new addition to the “script” of midnight police raids via search warrants and arrests on planted evidence.

Nora Apique, 66, was shot and killed on March 31, 2020 at around 7 o’clock in the evening, by a motorcycle-riding gunman on her way home in Sitio Caraatan, Brgy. Patong, San Miguel, Surigao del Sur. Apique was constantly red-tagged by the military especially during Duterte’s martial law in Mindanao. She was openly accused by the military of being an NPA recruiter along with Silvestre L. Maratas, vice-chairperson of the KAMASS-KMP San Miguel Chapter. These accusations were publicly made in 2017 and 2018 in the radio program of the 16th Special Forces Battalion on NICE Radio FM in San Miguel which aired Sundays at 9 to 10 o’clock in the morning.

Jennifer Tonag, 35, was killed on January 17, 2020 by unidentified men in Northern Samar after attending a seminar conducted by the provincial interior and local government office.

She was declared dead on arrival at the Northern Samar Provincial Hospital, with gunshot wounds on the head and chest. She was an active member of Northern Samar Small Farmers Association (NSSFA). She was a resident of Brgy. Sumuroy, Lope de Vega, Northern Samar.

The persistent and intensifying attacks against peasant women under the administration of President Rodrigo Duterte prompted Amihan to launch the #DefendPeasantWomen campaign last May.

A week before their ordeal with the bank accounts, Amihan through the Makabayan bloc in the Lower House of Congress filed a resolution to investigate human rights violations against peasant women.

If not humanitarian relief operations amid disasters or collective farming or “bungkalan” as a form to assert their right to land, Amihan has been in the forefront of campaigns to defend peasant rights, livelihoods, and, ultimately, their lives.

Sometimes, all they have in their defense are their unity and collective action.