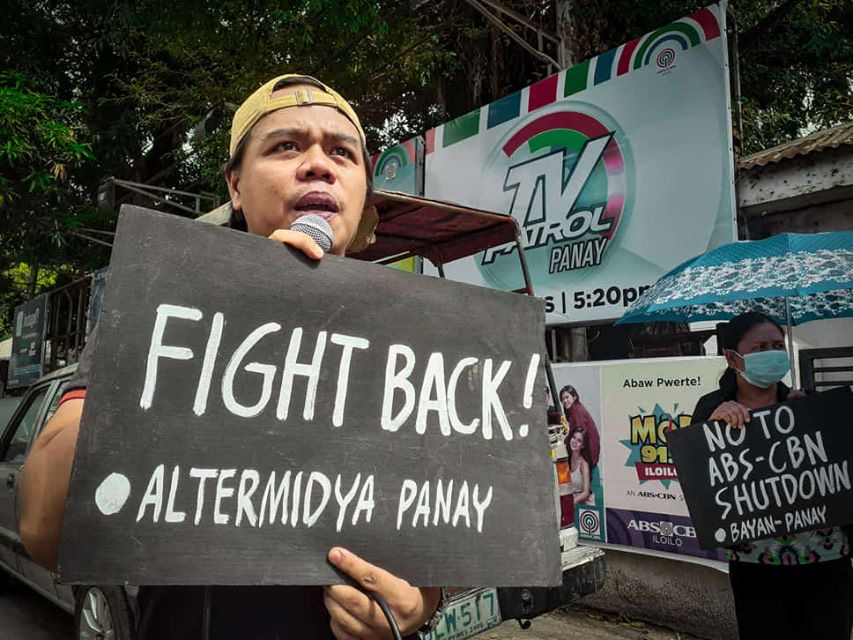 John Ian Alenciaga, writer for Panay Today and co-host of news program Dampig Katarungan, was the subject of a surveillance operation in Oton, Iloilo on June 1, 2021, decried Altermidya Panay.

The group reported Alenciaga observed six men, on board three different motorcycles, who had been persistently following him around. All three motorcycles had no license plates. Alenciaga had to seek help from security guards in the area. He did not venture outside until human rights workers came to his rescue.

Alenciaga suspected that the men were state agents as this was not the first time he was surveilled or harassed and he had also been red-tagged several times.

In November 2019, Alenciaga found himself being followed by two men for five hours.

On February 21, 2020, he and his colleagues were tailed by suspected intelligence operatives just after they left a protest action calling for the renewal of the ABS-CBN franchise. A similar incident took place again in June 2020.

On December 11, 2018 and, again, on March 16, 2019, Alenciaga was red-tagged along with some 40 activists, progressive church leaders, lawyers and human rights workers in posters plastered across Iloilo City.

In May 2020, Alenciaga was red-tagged on Facebook when he was accused of being a “spokesperson of the NPA”.

On April 23 of this year, his image appeared on several tarpaulins hanged on footbridges in Iloilo City. The tarpaulins bore messages claiming that Alenciaga and seven other activists, lawyers, and human rights workers were members of the CPP-NPA-NDF.

The latest incident of red-tagging came three days later, on April 26, when Jeffrey Celiz, NTF-ELCAC figure and SAMBAYANAN spokesperson, claimed during a local radio program that Alenciaga was a CPP-NPA-NDF personality, operator, and organizer.

“These repeated incidents of surveillance and red-tagging highlight the dangers faced by Alenciaga and other journalists and activists, who have constantly found themselves the targets of attacks and harassment by the government,” said Altermidya Panay in a statement.

“Altermidya denounces this apparent harassment against our colleague. This incident comes a few weeks after the DILG-Iloilo formed the provincial counterpart of the National Task Force to End Local Communist Armed Conflict, which is said to have spawned rights abuses against civilians and government critics,” said the network’s national secretariat in a statement.

Eastern Vista editor-in-chief Frenchie Mae Cumpio was arrested, along with 4 activists, on a midnight raid February 7, 2020 in Tacloban City. Eastern Vista exposed surveillance activities against Cumpio days before she was arrested. Cumpio also served as an anchor for radio program Lingganay han Kamatuuran. She is still detained and her trial is ongoing.

Similar circumstances of arrests – midnight police raids via search warrants, police incapacitating accused to see or access premises to be searched for a period of time before the “search” commenced and planting of evidence – and similar charges were also filed against alternative media journalists Anne Krueger and Lady Ann Salem.

Anne Krueger was among 47 arrested on simultaneous raids on activists and progressive groups’ offices in Bacolod City on October 31, 2019 via search warrants issued by Quezon City Executive Judge Cecilyn Burgos-Villavert. Krueger was released on bail after 11 days detention and her trial is still ongoing. One warrant among those issued by Burgos-Villavert and implemented on the same day as her arrest has been declared null and void by a Bacolod City judge.

Lady Ann Salem is among the Human Rights Day 7 arrested in 2020, on the police narrative that the seven were part of a gun running syndicate and warrants were issued to four locations also by Burgos-Villavert. Charges against Salem and co-accused labor union organizer Rodrigo Esparago were dismissed after a Mandaluyong court declared the warrants against them null and void on February 5 and they were released on March 5 after the judge denied the prosecution’s motion for reconsideration.

The whole Alternative Media Network or Altermidya was red-tagged in a Senate hearing on red-tagging on December 1, 2020.