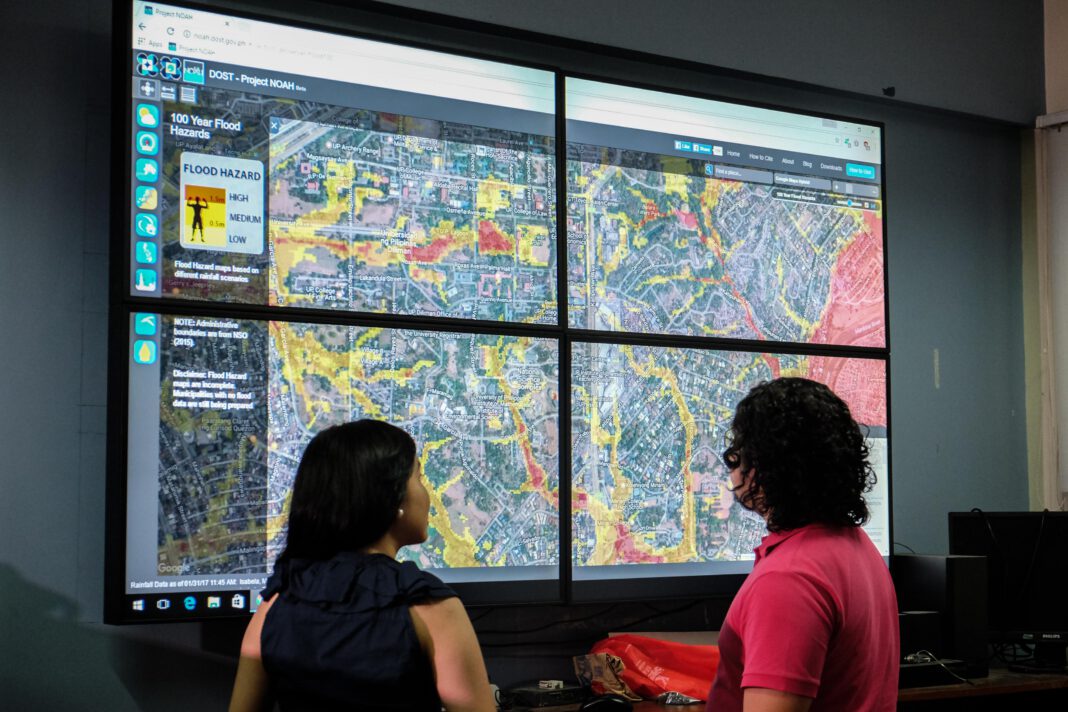 The eponymous Genesis flood narrative Noah’s Ark where God had intended to return the Earth to its pre-creation watery chaos and re-creating it through the survivors was all but the opposite of what became the household name Project Noah (as did storm surge). Project NOAH had tried to save as many people from the inconveniences and much more the perils of floods and avoiding any such disastrous effects of natural calamities to recur as Typhoon Yolanda in 2013.

Project NOAH was a tweet away in answering the flood status in affected areas. Project NOAH had real-time updates. Project NOAH had visualizations. Project NOAH seemed like it had its thing going that many thought it would replace or subsume the weather forecasting PAGASA. But more than the technology, in the Noah we know of today, there is not the archetypal antediluvian patriarch savior, but a team of mostly young scientists who have stayed home to serve the country.

Unlike the rainbow covenant, there would be more floods and calamities, especially in the time of unraveling effects of world climate change. But, no more Project NOAH?

The end of NOAH?

On an ordinary day—that is if there’s no typhoon or any calamities—the first thing Bernard Racoma will do when he arrives in Project NOAH’s office is to check if its website is up and running.  But when there’s a severe weather disturbance, they work in 12 to 16-hour shifts, even on weekends and holidays to monitor the data that come’s into NOAH’s website and ensure that the site will not crash due to heavy traffic.

Project NOAH (Nationwide Operational Assessment of Hazards) is a project funded by the Department of Science and Technology (DOST) and implemented by the University of the Philippines (UP). The program is a multi-disciplinary government program that provides real-time data of hazards including typhoon, flood, landslide and storm surges from different sources including the government’s weather bureau Philippine Atmospheric Geophysical and Astronomical Services Administration (PAGASA). These data are translated into high resolution maps, graphs, real time updates and risk assessments which is used by different government agencies including local governments in their disaster risk reduction and management (DRRM) efforts and emergency response.

“They work beyond the call of duty,” said Dr. Mahar Lagmay, Project NOAH Executive Director, referring to the researchers and scientists working with the government’s hazard and risk assessment program in a press conference on January 31.

Racoma, 28 years old, is a graduate of BS Applied Physics and MS Geology in the University of the Philippines Diliman (UPD). When Project NOAH was just a brainchild in 2012, he was among the graduate students, researchers and scientists from UP who were pooled to start the project.

More than four years later, Racoma is still with Project NOAH and among the leading developers of NOAH’s website. The web developer team’s task is to develop and improve the website which he describes as a ‘work in progress’ and upload all the maps and data created and gathered by other teams from NOAH.

But come March 1, Racoma along with some 40 skilled and highly trained researchers and scientists working with Project NOAH in different project components and specializes in different fields will lose their jobs if the program will not find funding to continue its operations before the project ends on February 28. In 2016, Project NOAH had around 80 personnel but was reduced to half due to budget constraints.

In a statement, DOST Secretary Fortunato De La Peña said that “it [Project NOAH] has delivered very useful technologies as part of its research outcomes and these technologies have been put to use. The extension was given up to end of February 2017 and part of the condition was the transfer of the technologies for use in operations in the government agencies who have the relevant mandate.”

Sec. De La Peña said that PAGASA will take over the operations of Project NOAH.

“PAGASA is the principal government agency that would take over the operations aspect of the delivered outputs/technologies,” said Sec. De La Peña.

“We have to take care of the human resource, that’s more important than any technology we developed,” said Dr. Lagmay.

But like any other project-based employment, except for Dr. Lagmay who is a tenured professor in UP Diliman and Dr. Enrico Paringit who leads one of NOAH’s project component DREAM (Disaster Risk Assessment, Exposure and Mitigation), all of Project NOAH’s staff are contractual employees.

In 2016, the salary of NOAH’s staff was delayed for five months because of the necessary bureaucratic process to release the funds for their salary.

“We need to take care of our scientists, they need to eat too, they need to provide for their children. They are highly trained and skilled scientists that deserve respect,” said Dr. Lagmay.

Jam Galang, 26 years old, one of the information officers of NOAH, has been with the program since January 2013 and has experienced several months of delayed salaries. Galang is a graduate of BS Geology and currently finishing his master’s degree in UP Diliman.

“’Pag walang sweldo, kakainin na lang ang pride at manghihingi sa mga magulang (If there’s no salary yet, I’ll have to eat my pride and ask from my parents),” shared Galang shyly when asked how they survive during months when their salaries are delayed.

Galang said that he decided to stay with NOAH despite the delayed salaries because there is fulfilment in disaster mitigation work. He started as a research associate, then as research scientists and later on was assigned with the landslide team who mapped landslide prone areas.

Jared Martin Cortez, 22 years old, who has been with NOAH for two years as part of the web development team, shared he wanted a job that directly helps people.

“Gusto kong gamitin ang skills para makatulong sa tao, yun ang nagtutulak sa amin na patuloy na magtrabaho kahit delayed ang sweldo (I want my skills to be used to help people, this is what pushes us to continue working even if our salary is delayed),” said the Cortez.

Dr. Lagmay expressed his concern over losing the team working with Project NOAH.

“We need more (disaster scientists) because our problems in the future will become worse especially with the threat of climate change impacts. Those scientists, when they disband where will we get people like them? We spent four years training them,” said Dr. Lagmay.

Dr. Lagmay further praised his team and described them as very loyal to the country and passionate with their work.

“We need an army of scientists,” Dr. Lagmay emphasized.

However, reports cited that Sec. De La Peña said that 15 to 20 of NOAH’s staff will be absorbed by PAGASA.

Dr. Lagmay on the other hand clarified that not all can be transferred to PAGASA because NOAH is not a forecasting agency.

“It has to be understood that Research Projects have start and end dates. In this particular project, the promised deliverables have been met and and now ready for adoption and use,” said Sec. De La Peña in his statement.

De La Peña furthered that if there is a new project proposal, it can be submitted and considered for funding.

However, Dr. Lagmay clarified that NOAH’s work is far from over. He explained that one of NOAH’s project component, ISAIAH or Integrated Scenario-based Assessments of Impacts and Hazards, the one currently funded by DOST for P25M is the one ending on February 28.

The Project ISAIAH mapped risk assessments on a municipal level and conducted trainings with the local government and different government agencies. However, the project only covered 15 provinces out of the 81 provinces in the Philippines.

Dr. Lagmay expounded that they want to finish the work so they submitted another proposal in November 2016 to cover the remaining provinces but there’s no feedback yet about the status of the proposal. Thus, the assumption that after February 28, Project NOAH will have no more funds to continue its operations.

He further clarified that the program NOAH has no funding but only the project components under the program.

For 2017, Congress allocated P2.4B for DOST’s Science and Technology Funding Services which is translated into the department’s Grants-in-Aid Program. In the General Appropriations Act (GAA) of 2017, a special provision is indicated that the DOST shall “give priority to research on disaster risk reduction and climate change adaptation and mitigation.”

Better in the academe

Dr. Lagmay appealed to everyone especially the government to continue supporting Project NOAH. He said that the best way to sustain the program is by institutionalizing it.

Dr. Lagmay said that NOAH can be attached to any agency but it would be better if it is in the academe so the program will be continuous and conducive to think of new products.

“Research and development is best with the academe. The academe is here to help address societal problems,” Dr. Lagmay explained.

Science and technology for the people advocates group AGHAM expressed their support to Project NOAH’s team.

“An essential public service such as that provided by Project NOAH should have an established place in the government and should be given adequate and continuous funding without the need to renew regularly,” said AGHAM’s Secretary-General Finesa Cosico in a statement.

Cosico also emphasized that this set-up, where scientists are only tapped when there are available projects, not only forces scientists to work abroad where they will be given regular positions, but also discourages them to work for national development.

“In project-based ventures, researchers are compelled to either haggle for extensions or submit a new project proposal in order to retain their positions once the project’s termination date arrives. Integrating the projects into relevant agencies will ensure the welfare of the scientists involved in it,” said Cosico.

The group pointed out that national industrialization is the key to strengthening the government’s disaster risk reduction management capabilities.

“If there is national industrialization, our nation’s capability to cope with disaster will be strengthened and we will have a pool of experts that will have continuous research and development on the adaptation of technology,” said Cosico.