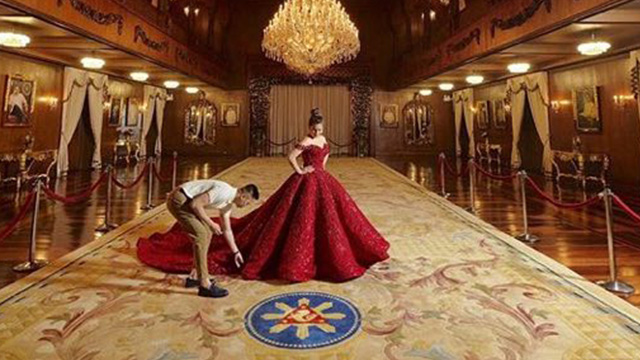 (Warning: humour, sarcasm, slaps-in-the-face loaded, not for the die-hard.)

While Presidential Spokesperson Harry Roque said that this is not a matter of entitlement since the president himself did not avail of the palace to be his abode, so there should be nothing wrong to have Isabelle Duterte’s pre-debut photos taken inside the presidential palace, public opinion begged to differ.

“The President is entitled by law to live in Malacañang but opted not to. So his relatives, especially his own (granddaughter), can have their photos taken in Malacañang,” said Roque.

Beyond what laws may have or have not been violated, netizens and activists make meaning of the photoshoot in the people’s daily lives and current events in the country (e.g. the drug war, homelessness, hunger, poverty, strife post-Marawi conflict, etc.). At the end of their fingertips were 280 characters in social media platform Twitter as quick reactions to the photo shoot avalanched after photos of the December 14 photo shoot were posted online, probably hoping to generate likes and spread good vibes hashtag blessed. Most were in agreement with the observation that it was ostentatious, a display of luxury, power and privilege. And that word that Imelda Marcos being herself put in the English dictionary: imeldific.

While a hundred homeless camp out near Malacañang to protest demolition and to defend their rights https://t.co/Rf4Tz0zaHZ

What are we in power for?"

Isabelle Duterte thinks we should focus on important issues. Surely if your lolo thought that your family's "humble lifestyle" was a campaign issue then, then your opulence is newsworthy now.

Isabelle Duterte asks all of us to spare her, a 17-year-old person, from hateful comments following a distasteful (and legally problematic) photoshoot.
How I wish Kian, at 17, could also wish to be spared from dying under the so-called drug war waged by her grandfather.

ISABELLE: I am just a girl standing in front of a boy asking you not to attack me.

isabelle duterte, swimming in the blood of slaughtered innocents pic.twitter.com/U9CXKwF1ZL

RED. JUST LIKE THE BLOOD OF EJK VICTIMS. pic.twitter.com/I9o2HIwtCm

The blood of thousands of EJK victims looks good on Isabelle Duterte. ? pic.twitter.com/GqkSVC3nAu

Comparisons were made, of course, on who wore it better.

People in Marawi trying to live through the day. Isabelle Duterte at Malacañan Palace, posing in a blood red gown, getting ready to celebrate.The Dictator’s grand daughter lives a lavish life while the poor can barely survive.Just like the Marcoses,they are detached from reality pic.twitter.com/94nQwCrr5A

Why blame her? Isabelle Duterte may have only been following another person’s (other people’s) footsteps after all…

I'm so glad Isabelle Duterte had her pre-debut photo shoot in Malacañang. I was worried they had to do it somewhere substandard. So fancy and posh. ?

Reminds me of a young Imee Marco.. wait. What. #NeverAgain #NeverForget

Remember how imee marcos partied like a princess in Malacañang?

This is so reminiscent of the lavish lifestyle the Marcoses flaunted, all the the parties and balls in Malacañang. https://t.co/2lmxQe78N5

I think she got her peg right here: pic.twitter.com/IkwOx3v39f

Others were simply just in disagreement with the styling and creatives.

i don’t care if may mga nag debut or nag wedding na sa malacañang. to pose in front of the seal of the president is sooo tacky. how is this classy? @isabelleduterte pic.twitter.com/mZd43eaFoM

Isabelle Duterte having her pre-debut shoot at Malacanang? Tasteless.

Netizens can be certain their reactions reached Isabelle.

‼️‼️woot‼️‼️ @isabelleduterte may be contacted to help you use Malacañang Palace for events, like your birthday celeb, anniversary, reunion or just a photo op / selfie / groupie. get in touch with her now! pic.twitter.com/NgskUaM1T4

This is my real account, teh. Don't need to show my face to prove a point.

Others in praise for the photo shoot got a piece of mind from the naysayers as well.

There were also tweets in defense of the negative reactions.

Si Kris Aquino nga, who's a taxpayer and a Presidential sister got called out for using a presidential helicopter tapos, Isabelle Duterte, who's barely 18 and not even taxpayer can enjoy a life of privilege? Lol, reevaluate your disposition.

People asking why we're salty about Isabelle Duterte's photoshoot. Malacanang is paid for by tax payers. We're paying for her photoshoot.

And since Roque said, “Gaya siya ng ordinaryong mamamayan na pwede ring mag-picture-picture sa Malacañang [She’s like any ordinary citizen who can take pictures inside Malacañang]” and with the tips from Isabelle herself, netizens looked only happy to oblige.

Why not just give the people invitations?

#DutertePalpak: PH holds the world’s longest lockdown, and yet the campaigns are still the same