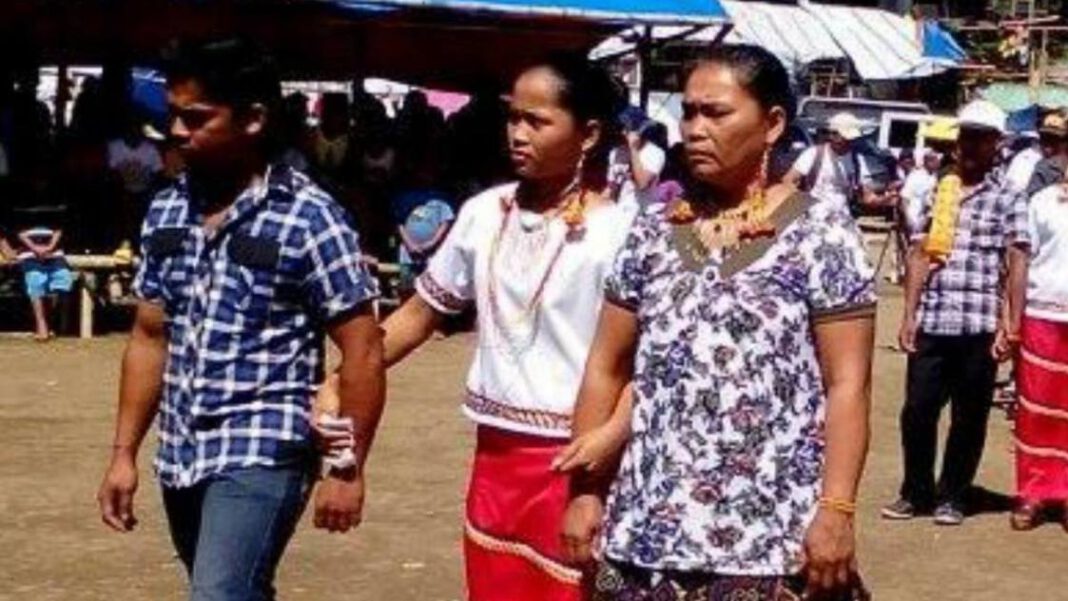 Various groups extended their condolences to Bayan Muna Rep. Eufemia Cullamat after photos of her slain daughter was posted or shared by military and various media outfits then circulated it on November 29.

Jevilyn, 22, was reported killed in an encounter between the Army’s 3rd Special Forces Battalion and the New People’s Army (NPA) in Surigao del Sur on November 28. Soldiers said Jevilyn served as a medic of the NPA.

What caught people’s attention in the photos was how the military posed beside the remains of Jevilyn and beside her displayed the reported seized flags, subversive documents and high-powered rifles. Jevilyn’s cold remains was also shown holding a rifle, that could have been placed on her, positioned her for the ‘photo opportunity’ (photo ops) and positioned the other reported seized items beside her. Especially since Armed Forces of the Philippines (AFP) spokesperson Brig. Gen. Edgard Arevalo said it was “half a day of hike” from the site of the clash to be able to confirm the identity of the body.

Arevalo said that the pictures were taken “for reporting and documentation purposes.”

But to pose with the dead?

“We cannot find good reason in posing for photos with the lifeless body of Jevilyn Cullmat, alongside seized firearms and communist flags,” said Commission on Human Rights (CHR) spokesperson Atty Jacqueline Ann de Guia on the death of Jevilyn.

“It is a cause for concern when representatives of the government treats the death of another Filipino as victory. Time and again, we have condemned armed conflict because, in the end, nobody really wins, especially when it leads to ruined lives and communities. However, in instances when armed atrocities are inevitable, we trust that all involved parties adhere to international humanitarian law (IHL) in limiting the effects of armed conflict,” the CHR spokesperson also said.

“Only psychopaths and terrorists are capable of taking photo opportunities with a dead body. Making a war souvenir out of the remains of an alleged armed combatant is not only a violation of international humanitarian laws but a manifestation of the military’s lack of basic human decency,” Gabriela Women’s Party Rep. Arlene Brosas said.

“We also condemn the NTF-ELCAC’s exploitation of the incident to advance their anti-Left propaganda. They have not only killed Jevilyn and desecrated her body. They also wish to use her memory for their political agenda. An utterly despicable and heartless move,” said Kilusang Mayo Uno (KMU) in a statement.

KMU added “We challenge the House of Representatives to denounce this rabid act by the AFP and NTF-ELCAC against Rep. Cullamat, an incumbent member of Congress. These horrible acts are an outright disrespect to the Cullamat family.”

The statement of the International Indigenous People’s Movement for Self-Determination and Liberation, meanwhile, condemned “how the State distort the militant history and reality of the different forms of people’s struggle for self-determination by deliberately obscuring legitimate issues of injustice and oppression.”

The group said that in the Philippines and many other territories around the world, armed resistance and liberation movements have been waged by Indigenous Peoples and marginalized sectors to defend their lands, lives and future.

Jevilyn’s face was blurred, the military personnel’s eyes were hidden by a black strip. Son of slain activist Jory Porquia during the COVID-19 lockdown likened the photo to an Abu Sayyaf photo.

But a post of a Philippines National Police unit did not even bother to blur Jevilyn’s face.

“Maybe we should study how to protect the dignity and privacy of families,” Lorenzana said.

For posing beside the body of Jevilyn and desecrating her remains and her being killed despite being a medic, various possible international human rights violations and war crimes have been raised against the military.

The 1998 Statute of the International Criminal Court states that, “committing outrages upon personal dignity constitutes a war crime in both international and non-international armed conflicts.”

The 1998 Comprehensive Agreement on Respect for Human Rights and International Humanitarian Law (CARHRIHL), which the Philippine government signed with the NDFP, also explicitly prohibits the “desecration of the remains of those who have died in the course of the armed conflict.”

The Additional Protocol I (1977) of the Geneva Conventions IV (1949) Article 8(c) of the 1977 defines medical personnel as “those persons assigned, by a Party to the conflict, exclusively to … medical purposes … or to the administration of medical units or to the operation or administration of medical transports”. It adds that “[s]uch assignments may be either permanent or temporary”. The definition covers both military and civilian medical personnel. Article 8(c)(ii) requires that personnel of aid societies be duly recognized and authorized by a party to the conflict.

Bayan Muna Rep. Eufemia Cullamat confirmed and mourned her daughter’s passing when the photos came out.

Eufemia said Jevilyn is of age to make her decisions and her choice was not a simple one, and arose from the grave abuses and poverty of the Lumad that she experienced and witnessed.

The three Lumad leaders were killed in front of the Lumad community including children by paramilitary while a military detachment was nearby was among the biggest issues that hounded the previous administration of Benigno Aquino III.