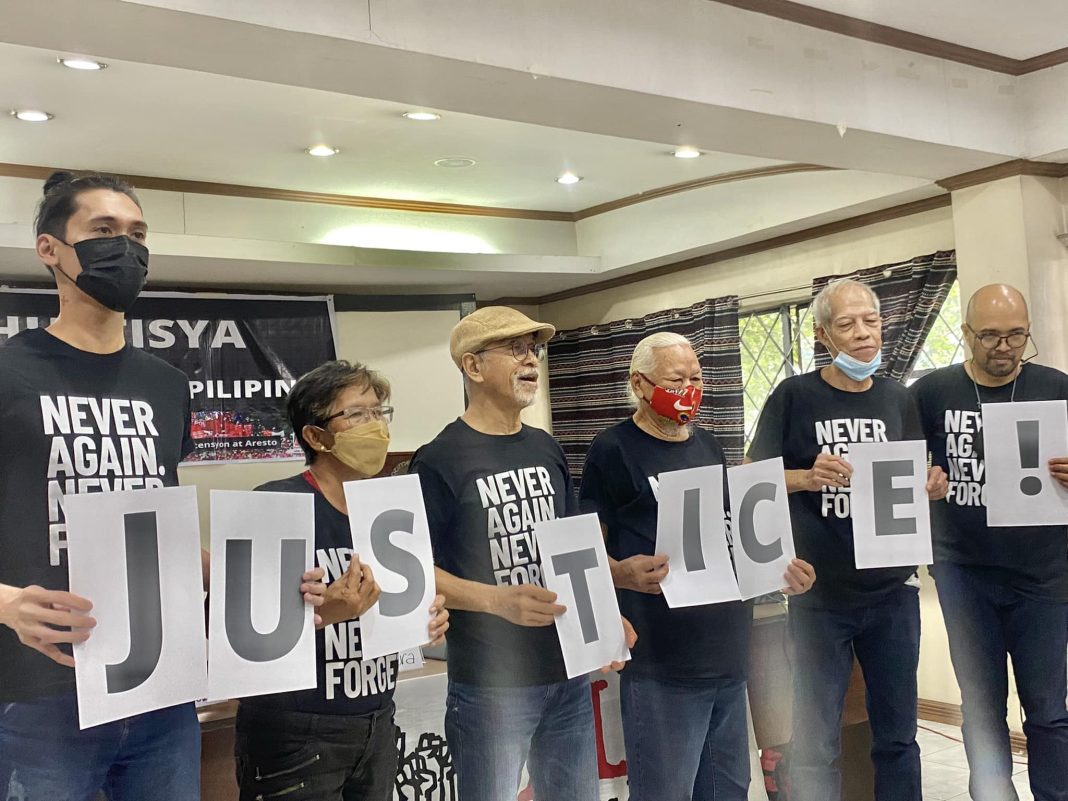 On September 13, martial law survivors led by Samahan ng Ex-detainees Laban sa Detensyon at Aresto (SELDA) along with Ron De Vera, son of political prisoner Adora de Vera, gathered in a press conference to lambast Marcos Jr.’s upcoming visit in the United States in time for the 50th year commemoration of martial law on September 21, saying it was insulting to the victims and kin suffered during the grim horrors in the reign of Marcos family.

A 1995 contempt judgement was filed by the US court against toppled dictator Marcos Sr. amid victory of martial law victims who petitioned the class suit. It was on Septmeber 1992 that the US Federal District Court of Hawaii issued the judgement in favor of the petitioners and thus finding Marcos Sr. guilty of gross human rights violations that his estate shall be held liable for reparation for the victims.

But since Marcos Sr. succumbed to death, both Bongbong and Imelda were then held in contempt due to their contemptuous acts as they were on behalf of the toppled dictator’s estate.

“The Estate is in privity with them and subject to the judgment herein,” Judge Manuel Real of the District Court of Hawaii said in the judgment dated January 25, 2011.

The contempt ordered the Marcoses to pay a whopping $353.6 million or at least P20.2 billion given that they have not dissipated their assets to compensate the victims of Martial Law.

In October 2012, the Court of Appeals Ninth Circuit affirmed the 2011 decision and said that the $353 contempt judgment is properly enforceable. The judgement sets a fine of $100,000 per day to be awarded to the 9,539 class members of the Hawaii class suit.

However, the living accomplices of Marcos Sr.’s crimes kept mum about it.

Ron emphasized such intense trauma that his mother Adora had to endure alongside the thousands of victims seeking for accountability from the Marcoses.

“Despite the intense trauma they experienced, my mother and thousands of other victims chose to seek the accountability of the Marcoses in the US courts, while Marcos Jr. and his family willfully undermined their efforts to seek justice. What is more unnerving is that she now is again victimized by another Marcos, having to face arrest and detention on trumped up charges,” said Ron.

To reiterate, Adora suffered from torture and illegal detention twice since the former Marcos dictatorship and now she was rearrested with yet another Marcos seated in power.

SELDA backed Adora and nine other named plaintiffs including the 9,539 members in the class action suit since 1986.

“With the standing contempt judgement against Marcos Jr., we call on Hawaii District Court Judge Derrick Watson to compel Ferdinand Marcos Jr. to pay the court judgment fine when he visits the United States,” said former SELDA vice-chairperson Bonifacio Ilagan, noting that such an immunity bestowed on Marcos Jr. by the US government precludes the execution of the court judgment.

Ilagan also stood as the lead convenor for Campaign Against the Return of the Marcoses and Martial Law (CARMMA).

“Providing such a platform for the son of the dictator who caused irreparable harm and violence on thousands in the Philippines is a slap on all victims of human rights violations,” he added.

According to Ilagan, there is nothing left for the Marcoses insisting that they can erase, revise, or distort the historical events of the martial law horrors.

“Court records abound with accounts and decisions on the billions of funds stolen from the Filipino people and the validation of the appalling atrocities committed against thousands of Filipinos are among the truths they cannot bury through state visits and speeches. We will continue to assert our collective memory on the atrocities of the Marcoses and the Filipino people’s struggle against a fascist dictatorship,” said Ilagan.

On the current and yet expired reparation bill

That we’re having this conversation (on RA 10368) means that it has not been effective,” said Ron.

The political prisoner’s son further hoped that there should come a day when the people need not to argue about why martial law victims and kin continuously fight for accountability and justice.

Ron even pointed out the lapses of the Republic Act 10368 or the Human Rights Victims Reparation and Recognition Act of 2013. Accordingly, the law declared the state recognizes the martial law victims’ sufferings and that they were to be reparated from the ill-gotten wealth of the Marcoses.

But other than reparation claims, there were also non-monetary programs that must be upheld according to the law.

“It should not only printed in a law. This should be practiced in the first place that future generations would always remember history and that Martial Law should never happen again. In fact in Germany, it is included in their education system that the holocaust happened. There is no debate, no further arguments, no further questions whether it really happened and we need to look at the other side of the story,” Ron continued.

He added that the bill is not only about the money as it can never pay the loss of someone’s dignity, well-being and other conditions at the expense of one’s human rights.

“What we urge is that historically, our stories must be emphasized, that all these happened and not be questioned, and we need not have to go through situations where we have to insist that yes our family was a victim. We need to be recognized by that,” Ron furthered.