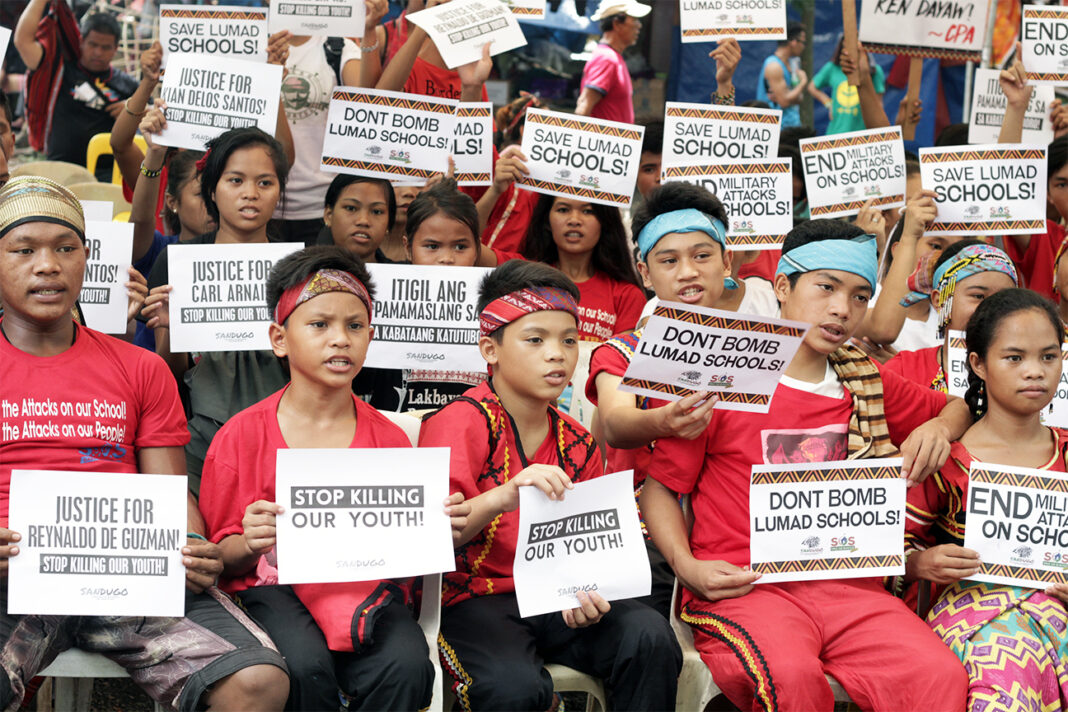 Moro and indigenous peoples held a protest for the third consecutive day after the fatal shooting of a Lumad student in Talaingod, Davao del Norte. President Rodrigo Duterte has not addressed the incident that followed three incidents of killings of minors in the drug war or in police operations–from Kian Delos Santos, Carl Arnaiz, and Reynaldo De Guzman.

Hundreds of Moro and indigenous peoples, united under the alliance Sandugo, marched from University of the Philippines Diliman Palma Hall to Katipunan Avenue on September 8 to call attention to the recent Lumad killing.

Obello Bay-ao, a 19-year old Grade 6 Lumad student, was killed by identified elements of CAFGU and Alamara paramilitary group on September 5. Bay-ao is the 47th Lumad killed in Davao region under the Duterte administration.

Almira Lidasan from Suara Bangsamoro noted how every year since 2015 when the Lumad, Moro and indigenous peoples hold their lakbayan to the national center, they would receive news of a tribe member getting killed by the military or paramilitary, the same groups that forced indigenous peoples to evacuate or for them to launch the lakbayan.

“It is like a bloody red carpet,” Lidasan said of the “welcome” they receive from the government.

Movement Against Tyranny also joined for a Black Friday Protest against continuing extrajudicial killings in Duterte’s all-out war in the countryside and the war against drugs, most deadly in the urban centers in the country. Movement Against Tyranny is set to hold a big protest rally against the continuing extrajudicial killings on September 21, the 45th Martial Law anniversary.