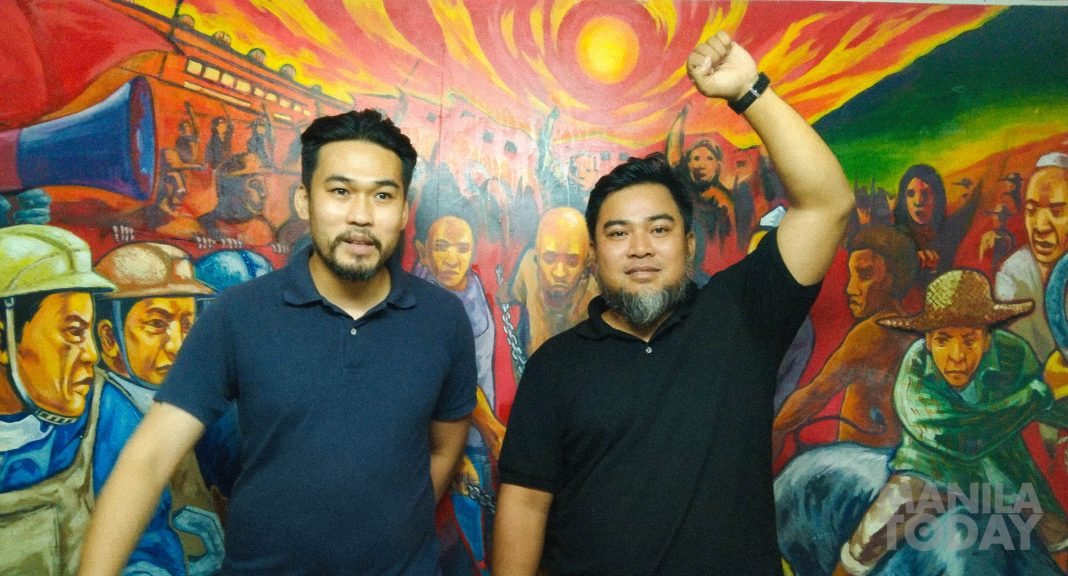 Cordero was detained for two nights and two days at the Quezon City (QC) Police Station 6 in Batasan for charges that many groups chided as politically motivated and obviously trumped-up.

Cordero’s arrest seen as an overkill

[There were 15 to 18 armed personnel. They had three vehicles. What I can say is that it was an overkill and there was only me they need to arrest.]

The arrest occurred at around 11:40 PM, just ten minutes after Cordero put his son to sleep.

Ideally, the arresting personnel would knock on the door prior to asking invitation to go to the police station. The accused would also be apprised of his rights.

But such did not happen during Cordero’s arrest, said Cordero’s counsel, Atty. Louie Santos. Instead, Cordero was held at gunpoint. Cordero only tried to negotiate to the arresting personnel to avoid commotion in their house which sheltered his wife, son, and several niece and nephew.

[There were several kids in our house. My nephews and nieces were there. They were not allowed to play guns. So, it would be traumatic for them. At least they did not plant guns on me.]

On the day of Cordero’s release, National Capital Region Police Office (NCRPO) and Quezon City Police District (QCPD) both released a separate statement asserting that Cordero’s arrest had been legitimate and observed the rights of the accused.

QCPD Director PBGen Nicolas Torre III said,” During the arrest, the accused was apprised of his constitutional rights.”

“Our men merely implemented an order from the court. It is not our intention to harass or maltreat anyone on account of their personal beliefs and opinion,” NCRPO said in their statement.

Cordero also shared that the arresting personnel did not know how to locate the Batasan Police Station.

[We went to Commonwealth Avenue and they were looking for the nearest police station. They said it was Station 6, but they did not know where it is.]

Cordero eventually had to share instructions on how to get there.

[One of them said ‘where do we take a U-turn, in Puregold or we go around Batasan? So I ended up being the guide and I told them to take a right at IBP Road. That was when I realized they were not from the area.]

The QCPD statement said that the arrest of Cordero was conducted by joint operatives of the Regional Intelligence Unit, NCRPO, District Intelligence Division, QCPD and Police Station 6.

Cordero was not furnished a complaint affidavit or subpoena

Cordero’s counsel asserted that he should have been given a copy of the complaint regarding the allegations that led to his arrest.

[Before the case goes to court, this should have gone through the DOJ, prosecutor’s office, so the accused will be given a chance to respond to the allegations.]

Santos also noted that Cordero’s address in the warrant was incorrect, indicated as “Batasan Hills, Puray, Batasan, Quezon City, National Capital Region. Puray was indicated in the address of three of the four others named in the warrant and it seemed as if Cordero’s address was only patterned after the others. Yet, the operatives were able to reach Cordero at the correct home address and the QCPD statement even indicated that the operation was conducted at “No. 55 Kasunduan St. corner Kaunlaran St. Barangay Commonwealth, Quezon City.”

From his arrest to his time in jail, Cordero and his counsel and family did not even know who the complainant of the frustrated homicide charge was and where and when the alleged incident happened.

Cordero was able to access the information in the complaint affidavit after his release.

The case was filed on July 4, 2022 and the alleged frustrated homicide incident transpired on March 26, 2022 in Brgy. Puray in the province of Rodriguez, Rizal. This is also the indicated home or residential address of three others accused in the warrant, namely Ricardo Cruz, Danilo Basilio Acayen Sr., Amor Reyes Acayen Sr., and Melvin Pacadar Cabangan. The Acayens are Dumagat indigenous people, according to Commission on Human Rights (CHR). CHR had the opportunity to visit Cordero in his detention.

Cordero said he did not know and have not met the others accused in the case. He also has not stepped into where the frustrated homicide incident happened.

[From before, we know how they charge, arrest and jail activists using search warrants and plant guns and explosives. But now, because of the stricter rules in the implementation of warrants, they tried a different tack.]

He added that the state had to recalibrate its legal offense away from the practice of the former president Rodrigo Duterte of firearm and explosives charges. According to Atty. Santos, they reverted to the older modus operandi, used also by administrations before him.

[They returned to their old modus, that there are encounters of the New People’s Army and military. Having unable to identify who they came up against and dealt them injury or death, they will now file these are criminal cases against activists.]

[They have a lot of ways to deter us, but we have more reasons to continue.]

Cordero further said that activists only campaigned for the interests of the people.

[If the needs of workers are provided. Give them what is rightfully theirs. Give them benefits. Allow us to join and form unions, allow us to organize. Don’t obstruct us. In this way, we can address the needs of the workers we organize, instead of slapping trumped-up charges against us.]

He added that such politically-motivated attacks only fuel the ire not only of activists but also of the ordinary citizens enduring continuing crisis after crisis.

Karapatan National Capital Region said that fascistic and tyrannical rule have been a trademark of Duterte regime, now looking to be the same with the new Marcos Jr regime, with the intent to silence dissenters rather than focusing on the welfare and interest of the people.

Ram Carlo Bautista, Reina Mae Nasino, and Alma Moran, known as the Tondo 3, would have spent their third year in jail since their arrest on November 5, 2019. The Court of Appeals recently decided in favor of their petition to quash the warrants and expunge the evidence against them, but the Office of the Solicitor General filed a motion for reconsideration.

Meanwhile, four among the Human Rights Day 7 who remains in jail include Romina Astudillo, Jaymie Gregorio, Mark Ryan Cruz, and Joel Demate. Three others, Lady Ann Salem, Rodrigo Esparago and Dennise Velasco have been released after the respective courts handling their cases dismissed charges against them.

All of them were jailed and charged with illegal possession of firearms and explosives, after their homes or offices raided in similar fashion.