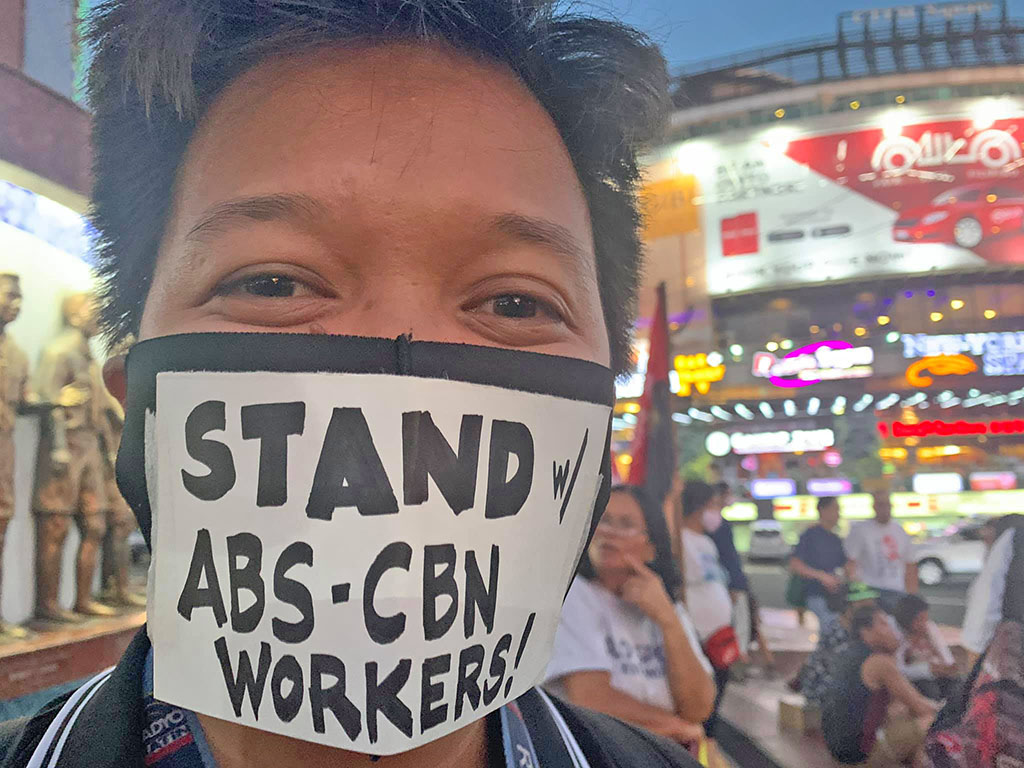 The KMU labor center said that the Office of Solicitor General’s filing last Monday of a quo warranto petition in the Supreme Court against ABS-CBN for alleged franchise violations would cause thousands of job losses and cause “grave public injury”.

The government’s top lawyer Jose Calida accused the company of “highly abusive practices” in his bid to invalidate ABS-CBN’s franchise. The petition was filed at the High Court before the House of Representatives could tackle at least nine bills filed for ABS-CBN’s franchise renewal for another 25 years before it adjourns in March 11 and ABS-CBN’s 25-year congressional franchise expiration on March 30 this year.

President Rodrigo Duterte repeatedly threatened in the past years to block the renewal of ABS-CBN’s franchise. In December, Duterte even urged the owners of ABS-CBN to “sell the company. On December 3, Duterte said in a speech in Malacañang, “If you expect that (the franchise) will be renewed, I’m sorry. I will see to it that you’re out,” But Malacañang on Tuesday said the President has nothing to do with Calida’s quo warranto petition.

“We would not want a repeat of what Marcos did to the Lopez-owned corporations under martial law but this is what Duterte is doing. He wants the media and public utilities for his own business cronies, with thousands of jobs and public interest as collateral damage,” Adonis said.

Duterte accused ABS-CBN of accepting funds from him without airing his political advertisements in the elections campaign in 2016. The president said the media network also did not return his money. He also charged Lopez Holdings, owner of ABS-CBN, for not paying its debt to the state-run Development Bank of the Philippines. ABS-CBN denied allegations that it has outstanding tax or debt liabilities with the government.

Duterte also ranted against the network’s alleged protection of vested interests in water concessionaires Manila Water and Maynilad. Maynilad is one of two water concessionaires in Metro Manila after water distribution was privatized in the late 1990s, and the Lopez Group of Companies (then Benpres) was part of the partnership running the water and wastewater services in the West Zone of Metro Manila until 2006.

According to the company’s report to the Securities and Exchange Commission, ABS-CBN employs 6,730 regular employees, 900 non-regular workers and more than 3,325 talents since the end of 2018.

“While we recognize that there were various labor-related issues that are existing between the workers and their management, we stand that shutting down the company and silencing the media will never be an option and resolution to resolve it,” said Defend Jobs Philippines in a statement.

“If there is a positive effect [to] the continuing delays and attempts to block the granting of renewed franchise for ABS-CBN, it could have been the growing unity of media workers and celebrities to defend free press and the livelihoods of more than 11,000 Kapamilya workers,” said Defend Jobs Philippines on February 12.

National media groups National Union of Journalists of the Philippines and Altermidya also supported ABS-CBN’s franchise renewal in the name of defending press freedom and job security of its workers.

They held an indignation rally on Monday at the Boy Scouts Circle in Quezon City following Calida’s quo warranto filing.

Kapisanan ng mga Brodkaster ng Pilipinas or KBP (Association of Philippine Broadcasters) said it “will continue to support and help work for the renewal of the franchises of ABS-CBN and other KBP member networks, knowing fully well that it is for the best interest of the public.”

ABS-CBN is a member of the KBP.

“By tradition, Quezon City is also known as a bastion of freedom, knowledge, and diversity, and the presence of multiple media networks in QC embodies these values,” she said in a statement.

“Aside from being one of our city’s top taxpayers, ABS-CBN employs thousands of our city’s constituents, whose families would suffer should its legislative franchise not be renewed,” the mayor added.