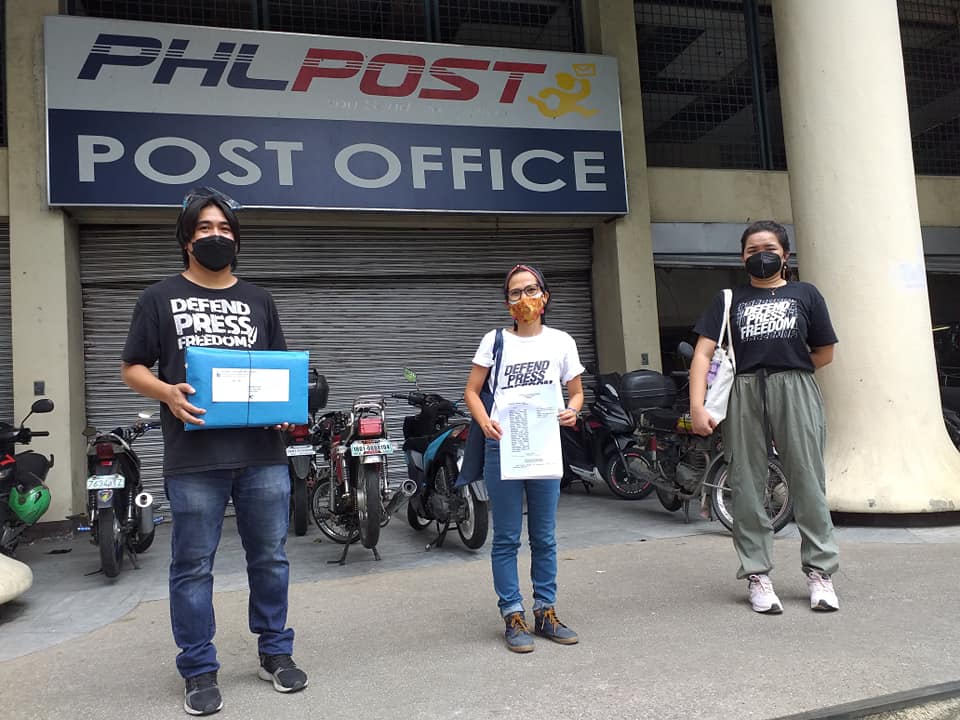 Margarita Valle appealed at the Supreme Court to challenge the judgment made by the Office of the Ombudsman dismissing the criminal charges she filed against police and military officers behind her unjust arrest.

In her petition for certiorari, Valle also included the Ombudsman for ruling out that there was not enough evidence supporting her criminal charges against officials who unjustly arrested her and detained her, adding that she was held incommunicado for hours.

“I am also holding the Ombudsman accountable for not enforcing the laws against my accusers for so-called technical reasons that the office adamantly pursued,” Valle uttered.

Also, she included the failure to protect her interest as an individual from the abusive use of power of those who are in uniform and expected to serve and protect.

Valle, a veteran journalist now with Davao Today, was illegally arrested last June 9, 2019 at Laguindingan Airport in Misamis Oriental. She was mistaken to be a certain Elsa Renton and unlawfully detained despite her proving her identity. Later on, the officials admitted that they falsely accused Valle and said it was just a case of mistaken identity.

The incident traumatized Valle up to this day.  She may have been freed 12 hours after her unlawful arrest but up until now, 2 years after, she felt like was not honestly free.

“I have wanted to believe that nothing’s changed, that I am doing well, but deep inside, I am far from my true self. I admit that I hated every moment that a blank wall stares at me, it’s time I attempt at writing my usual stuff, because it’s hard, blangko lang talaga,” Valle said in a press conference conducted on August 12.

The veteran journalist said she found it hard to keep up and be herself again, not having the courage to write again as she was still haunted by the trauma brought after the incident.

In filing, Valle hopes that the Supreme Court will acknowledge her absolute right as a Filipino to hold accountable the people involved in her arrest and the trauma she experiences up to this day.

Over the last two years since her arrest, Valle had sought justice but has yet to succeed.

In a decision dated June 24, 2021 but received by Valle in August, the Ombudsman said that there is no newly discovered evidence added to materially affect the outcome of the case or no proof that grave errors of facts or laws, or serious irregularities were committed by its office.

On August 10 last year, the Ombudsman dismissed the criminal charges filed by Valle in 2019 against 17 police and military officials and other suspects on the basis that she was not able to establish probable cause to charge them with arbitrary detention, kidnapping, serious illegal detention, violations of Anti-Torture Act of 2009 and the rights of persons detained.

The Ombudsman also dismissed the administrative charges Valle filed against 15 of the 17, holding liable only two officers for grave abuse misconduct, and grave abuse of authority and ordering three months suspension without pay for “simple neglect of duty.”

The two are then-Regional Commander of the Criminal Investigation and Detection Group (CIDG) in Zamboanga Peninsula Colonel Tom Tuzon and OIC of CIDG in Zamboanga Del Sur Madzie-Aziz Mukaram. Tuzon and Mukaram appealed their suspension without pay, but this was denied by the Ombudsman.

Solidarity to fight for justice

Various groups expressed their solidarity with Valle’s pursuit of accountability and justice.

“We hope that this time, the Supreme Court will be enlightened about what truly transpired on the unfortunate day when those who were mandated to serve and protect attempted to snuff out the light of press freedom,” International Association of Women in Radio and Television (IAWRT) Philippines said.

“More than an apology and a slap on the wrist, we call for accountability and justice for the arrest of Margarita Valle and hope that hers is the last case of mistaken identity even when the presumption of regularity is often used to shield the even the most irregular acts from scrutiny,” the National Union of Journalists of the Philippines (NUJP) stated in their statement.

Valle is the chairperson of the NUJP Davao chapter.

The case of Valle is not the only case of ongoing attacks against journalists under Duterte’s watch.

Journalists have been raided in their offices or homes and slapped with the usual charges against activists and critics, “illegal possession of firearms and explosives” that came from planted evidence according to the accused.

Manila Today editor Lady Ann Salem was arrested on December 10, 2020 and jailed on those trumped-up charges and was freed less than three months after her arrest, but the government is appealing the dismissal of the charges against her at the Court of Appeals.

Eastern Vista editor-in-chief Frenchie Mae Cumpio was arrested in a pre-dawn raid, detained last February 7, 2020 and until now is still in jail and on trial.

Journalist Anne Krueger of Panghimutad was arrested on October 30, 2019, along with 50 more others in simultaneous raids in homes and offices of progressive groups and leaders in Bacolod City and Escalante in Negros Occidental province. She was able to post bail after 11 days in detention but is still on trial. The warrants served in Negros came from Quezon City Executive Judge Cecilyn Burgos-Villavert, who also issued the warrants against Salem and 6 others from the Human Rights Day 7.

Maria Ressa, CEO of Rappler, still faces seven pending investigation and cases from the government and have been arrested twice (in one of the two times, she was detained overnight) and posted bail eight times.