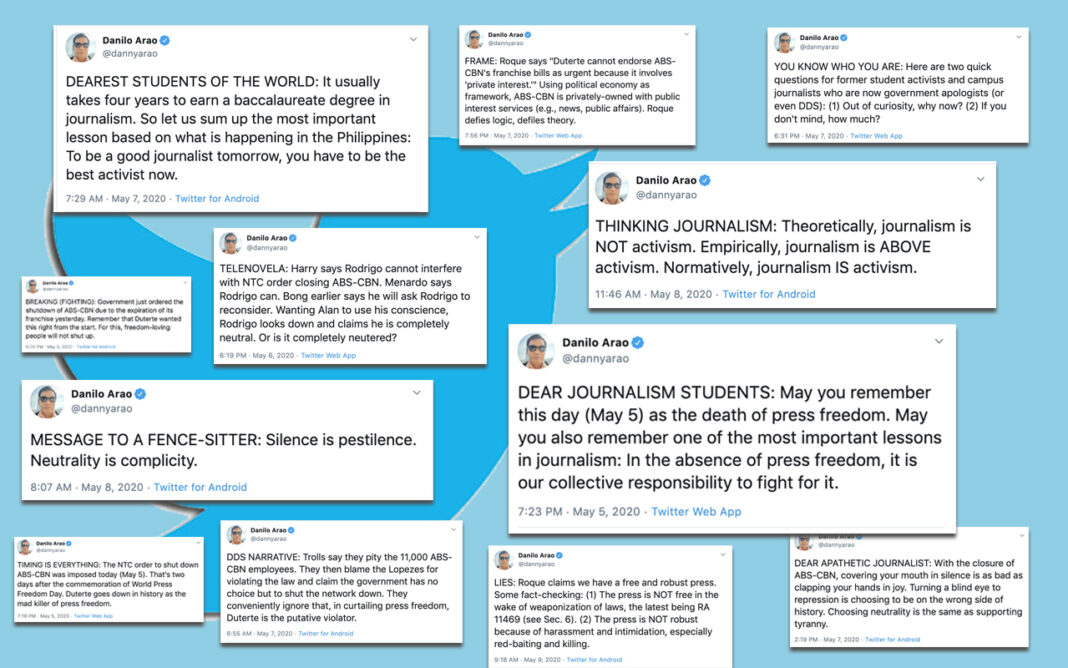 When the government forced ABS-CBN to go off the air on May 5, the public was dealt with a big, real-life lesson on press freedom.

And for those who were unable to share the feeling of that harrowing moment when an indefinite black screen came up—a déjà vu from martial law—Prof. Danny Arao’s tweets is your ultimate press freedom and journalism companion.

Prof. Danilo Arao is a journalist and an educator. He teaches journalism at the College of Mass Communication in the University of the Philippines Diliman. He writes for various alternative media publications and has long worked and advocated for media and news literacy.

Prof. Danny Arao’s tweets will be your shortest readings on the subject of journalism and press freedom—only 280 characters at most per lesson—in an extraordinary teaching moment of press freedom in our times.

PRESS FREEDOM'S DEATH: With the prevailing culture of impunity, press freedom has been dying. On May 5, ABS–CBN's forced closure and the killing of a radio journalist are the coffin's last two nails (i.e., two days after World Press Freedom Day).

PERORATION: A certain government official says that Duterte is not responsible for the closure of ABS-CBN. In a way he's right. His boss is ultimately responsible for the death of press freedom. Invoking "rule of law" in the wake of its weaponization is any tyrant's ululation.

DEAREST STUDENTS OF THE WORLD: It usually takes four years to earn a baccalaureate degree in journalism. So let us sum up the most important lesson based on what is happening in the Philippines: To be a good journalist tomorrow, you have to be the best activist now.

STATING THE OBVIOUS ABOUT ABS-CBN: We've made it clear in the past but we have to go on record again. If you want a short, crisp explanation as to why ABS-CBN 2, DZMM and MOR are now off the air, we only need to use three words: DUTERTE WANTS IT.

CONFLICTED SOURCE: On the issue of ABS-CBN franchise, I wonder why a certain cable TV operator with a clear conflict of interest has been used by media as a "credible" source of information. The very surname should already be a red flag. (Clue: Shout "Uy!" when you find out).

PRESS(ED) FREEDOM: Press freedom is a right. Franchise for broadcast operation is a privilege. But when franchise renewal, just like other laws, are weaponized by a vindictive tyrant, the attack on press freedom happens. To deny weaponization is to deny the tyrant's tirades.

DEATH OF PRESS FREEDOM RAMBLINGS: Chilling effect is now being felt. Who will be next? Yes, an attack on one is an attack on all. What kind of reportage can you expect with the sword of Damocles on your head? Yes, the killer shall be brought to justice. Such coherent incoherence.

DEAR JOURNALISM STUDENTS: May you remember this day (May 5) as the death of press freedom. May you also remember one of the most important lessons in journalism: In the absence of press freedom, it is our collective responsibility to fight for it.

MEDIA(TED): The OSG says the NTC may be sued for graft if it grants a PA to ABS-CBN whose franchise ends today (May 4). To say that Duterte is not responsible for ABS-CBN's probable closure is to deny that Calida is the government's top lawyer. Only the uninformed will absolve.

COVID-19 AND THE OTHER "VEERUS": There is an epidemic of media repression in the Philippines as the government continues to harass and intimidate the media. It is using the COVID-19 pandemic as cover to suppress basic freedoms, including press freedom.

LIES: Roque claims we have a free and robust press. Some fact-checking: (1) The press is NOT free in the wake of weaponization of laws, the latest being RA 11469 (see Sec. 6). (2) The press is NOT robust because of harassment and intimidation, especially red-baiting and killing.

LOVE (OR HATE) ABS-CBN: If you're a teacher of journalism and you favor the closure of ABS-CBN, may I know what you've been teaching all these years? To say that franchise issue has nothing to do with press freedom is to support a transgressive wet dream of a repressive regime.

"TROLLING" ABS-CBN: The DDS army is happy with the impending closure of the network they so hated. Just remember: The dictator who ordered the closure of ABS-CBN in 1972 was removed from office. To quote George Santayana: "Those who do not learn history are doomed to repeat it"

TRUTH SERUM: Government media are spreading "fake news" as red-baiting continues against activists and journalists. The UN's statement that the press provides the COVID-19 "antidote" which is truth should serve as a reminder to journalists and a warning to repressive governments.

The long-winding issue of the non-renewal of ABS-CBN franchise once again came to fore in a shock National Telecommunications Commission (NTC) cease and desist order to the network on May 5, a day after the franchise expired on May 4. President Rodrigo Duterte talked of shutting ABS-CBN down by blocking its franchise extension since he came to the presidency.

The House of Representatives has failed to act on pending legislations for the franchise renewal, with its leadership’s indecisiveness to tackle the issue even as the expiry of the franchise loomed. If not for mounting public pressure and unwanted negative publicity, they had only on March this year after all these years (at least three years) they could have acted on it, made the NTC promise to give the network a provisional authority to operate after May 4 because they were adjourning soon and would have no time to tackle the bill. (Not factoring yet that it had to go to Senate and that would take time as well and then to the president for his signature, as any law would, and can be vetoed or can lapse into law after 30 days, taking time once more.) It was like a happy medium to a tumultuous issue.

But come May 5, NTC went back on its word following the government’s lawyer, Solicitor General Jose Calida’s threat to sue NTC officials for graft if they give the network a provisional authority.

ABS-CBN has been off the air for five days. Congress legislation will take time. Duterte’s chief legal counsel Salvador Panelo yesterday questioned ABS-CBN Corp’s petition to the Supreme Court seeking to stop NTC’s order to shut down its broadcast operations, citing technicalities over the plea. Even when Presidential Spokesperon Harry Roque, who replaced Panelo, said Duterte will be neutral and will leave the fate of ABS-CBN’s franchise to Congress. Roque said Duterte is not inclined to veto the bill unless there is any constitutional infirmity. But, we’ll really just probably see when we get there, right?

Meanwhile, Duterte got what he talked about many times that he will see to it happen.

And the Filipino people, far and wide, was dealt a lesson in press freedom when a black screen came up. Now, #NeverAgain and #NeverForget are the next lessons.