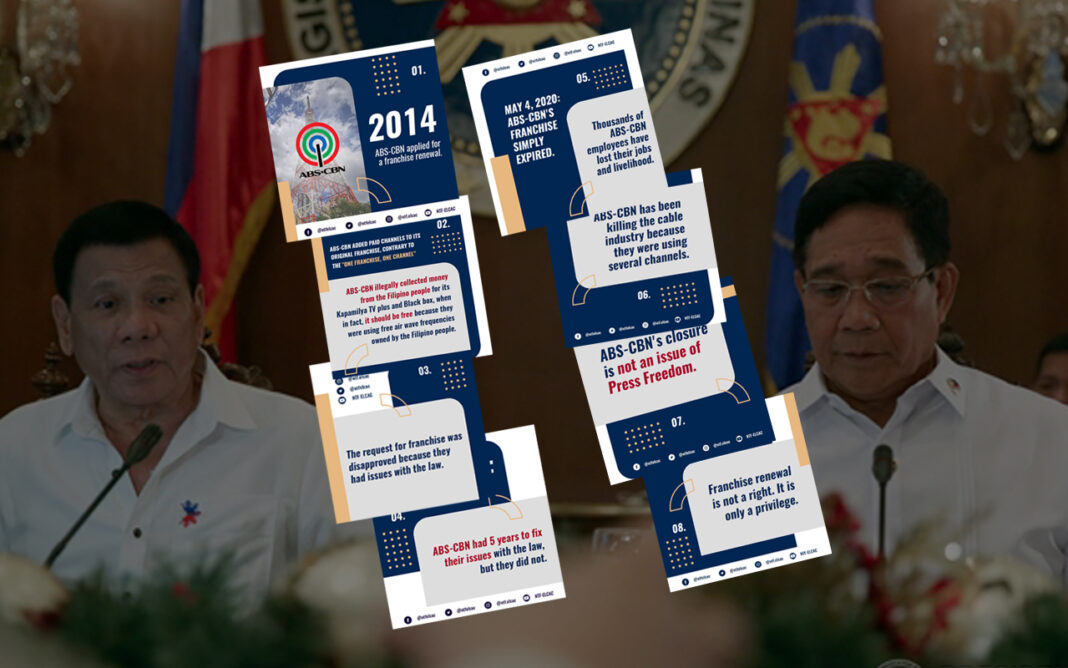 ABS-CBN reporters called out the National Task Force to End Local Communist Armed Conflict (NTF-ELCAC) when it made its own “info materials” and “posted fake news” on its Facebook page about the issue on ABS-CBN franchise.

It was published hours after the online protests on #NoToABSCBNShutdown and #LabanKapamilya Facebook live event with ABS-CBN celebrities ended on May 8 and is still posted on its page hours after being called out by ABS-CBN reporters and various government officials denying involvement, but is now currently not available.

In such approach, civilian agencies and local government units – the whole bureaucracy – will have a part in its anti-insurgency campaign, supposedly mainly aimed at the more than 50-yr old armed communist revolution in the countryside by the New People’s Army led by the Communist Party of the Philippines.

PCOO, NTFELCAC spewing lies after lies. ABS-CBN's franchise bill was not disapproved due to legal issues BUT Congress didn't act on it. All issues were cleared during Senate hearing.

Why are we paying fake news peddlers? pic.twitter.com/BjChlwsGzK

National Union of Peoples’ Lawyers Spokesperson Atty. Josa Deinla reacted to the post, “Sa lahat ng isyu ng panunupil, promotor/epal ‘tong NTF-ELCAC. I bet, Jobert, by the end of the year, they will count the shutdown among the “highlights” of their Legal Cooperation Cluster. Have you seen their 2019 Annual Report?”

[NTF-ELCAC is the promoter/dabs in all the issues of repression.]

Sec @martinandanar, why are PCOO social media pages being used to spread fake news on the ABS-CBN franchise issue? pic.twitter.com/tmbylWHkfK

And then, she inquired why the NTF-ELCAC is posting its opinion on the ABS-CBN issue.

PCOO reposted the statement on its page, but its head, Secretary Martin Andanar “washed his hands” off responsibility for the repost, saying it was “done without the usual vetting process of the office.”

Sec Andanar says the resharing of the PCOO Facebook page of the post of the NTF-ELCAC regarding the ABS-CBN franchise issue “was done without the usual vetting process of their office” pic.twitter.com/ywqr1Oy4PT

From the Office of the Presidential Spokesperson –

We wish to clarify that the above posts did not come from the Office of the Presidential Spokesperson and the NTF Stratcomms which is headed by the OPS. Hence, not the official statement of our Office. Thank you.

Youth group Anakbayan Metro Manila said the information NTF-ELCAC posted about ABS-CBN is what the trolls “drivel all over social media”, making it the “trolls’ script.”

“The NTF-ELCAC revealed its hand when it posted disinformation about the ABS-CBN issue supposedly so that ‘the CPP-NPA-NDF will not use the issue of ABS-CBN to destroy and discredit the government.’ It is the author of many disinformation campaigns – we have seen it too many times: what the generals or Duterte minions in government blabber to cover up for their negligence and incompetence provided the scripts for trolls and fake accounts in social media, so many times especially during the lockdown,” said Anakbayan Metro Manila in an interview.

The group made an example of how even when Duterte slipped about the community quarantine being a “lockdown” but people who speak for the government insisted it was not and trolls bashed people and media who called it a lockdown. Then eventually the government used the terms interchangeably and then after two days, Department of Interior and Local Government Secretary Eduardo Año called the enhanced community quarantine in Luzon as similar to a total lockdown.

They observed the same for Duterte’s “biggest boo-boos” such as “the ‘shoot them dead’ statement that government in virtual pressers the following day cleaned up as being directed to the Left, when it was clear that Duterte was speaking about quarantine violators who are ‘unruly’ and who pose a threat to the security of police enforcing the lockdown.”

“How is that not a threat to the public when they have arrested more than 100,000? When can one be ruled as unruly and when one is not? How about when they beat up the fish vendor in Quezon City and dragged him like a pig to be slaughtered,” continued Anakbayan Metro Manila.

They said the NTF-ELCAC revealed its hand in the disinformation campaign using trolls and they used the call #NTFELCACnabisto.

“Because of utilizing a whole-of-nation approach, the NTF-ELCAC’s anti-insurgency campaign is really directed at the public—so they can waylay any public action from their growing restlessness because of government’s growing negligence, corruption, incompetence especially during the lockdown. It won’t be a surprise that the systematic, well-funded disinformation campaign is part of that,” said the group.

The group also said, “It is convenient for Duterte to threaten about declaring Martial Law during this time due to ‘lawlessness’ of the NPA and the NTF to blame the CPP-NPA-NDF on ‘using the ABS-CBN issue’ when it is them who failed the people in this pandemic, almost 60 days and no mass testing and ABS-CBN being shut down because Duterte openly spoke against granting the network its franchise extension.”

The NTF-ELCAC post used the hash tags #PressFreedomIsAlive and #NoOneIsAboveTheLaw.