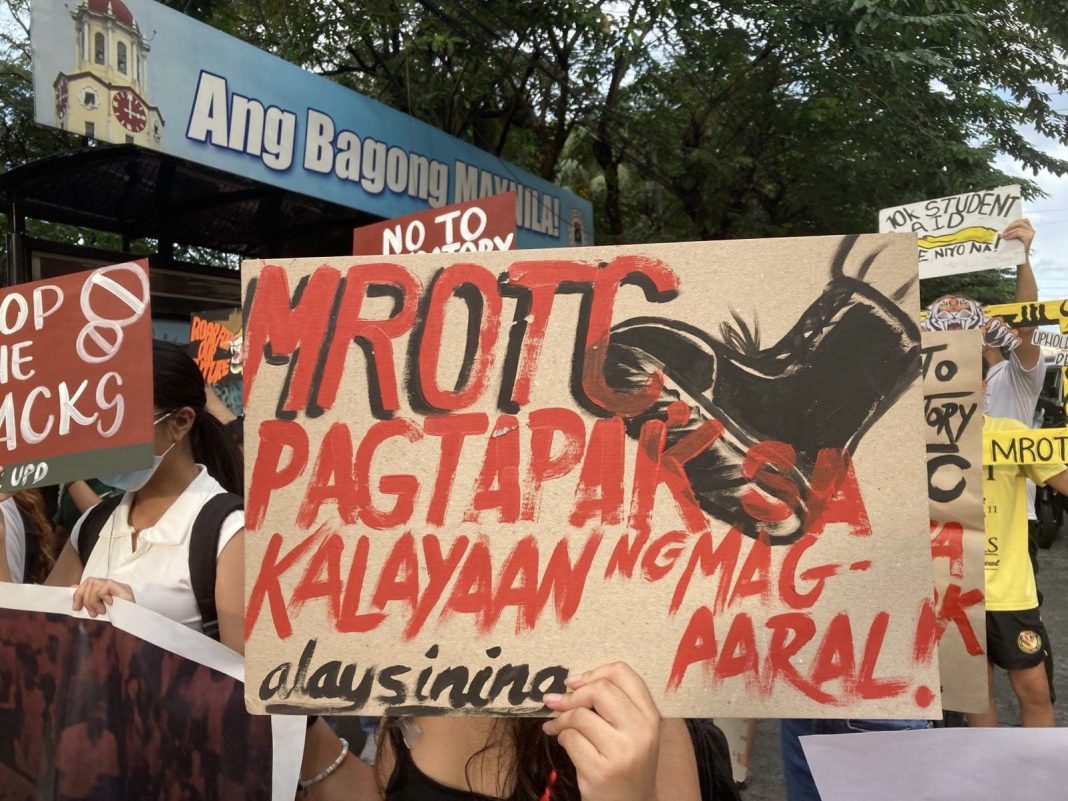 [The youth maintains that MROTC is not needed by students and will do no good and will bring back the times of abuse and repression through this program.]

Royo added that students would also bear the brunt of the additional costs of uniforms should MROTC be implemented.

He said that Marcos Jr. should prioritize delivering quality, inclusive education especially since the Commission on Higher Education (CHED) has directed higher education institutions (HEIs) to revert to face-to-face classes under CHED Memorandum Order No. 16.

De Vera noted that HEIs have the discretion to deliver programs be it face-to-face or hybrid learning modality that they refer to as “hy-flex’ which means hybrid and flexible. However, the intent to offer “degree programs in full distance learning, including online modality” should have the approval of CHED.

“SUCs endured severe budget cuts. Instead of increasing of addressing the return of students to school after two years of no face-to-face classes due to the pandemic, mass transfer of students from private to public schools, even with issues in the past hit of typhoons,” said Royo.

According to National Expenditure Program (NEP) 2023, only the budget for the Department of Education increased for the education sector while as much as P10.8 billion was cut for SUCs.

In NCR, six out of eight SUCs would suffer from massive budget cuts with 115 out of 116 SUCs suffering at large. All of them are also set to have decreased Maintenance and Other Operating Expenses (MOOE) allotments for 2023.

“A closer look into the 2023 NEP shows that this increase actually only went to the Department of Education (DepEd), headed by Vice President Sara Duterte-Carpio. The DepEd budget includes a dubious 150-million-peso confidential expenses item, supposedly to combat terrorism and violent extremism, sexual grooming, and drug use by DepEd personnel. However, this can also be used against students’ right to press freedom, organization and assembly as well as the proposed return of Mandatory ROTC,” said Alwen Santos, coordinator for National Union of Students of the Philippines – National Capital Region.

Santos lamented the P2.1 billion decrease budget for CHED which administers the free tuition policy of the government. He also worried for the more than 2 million students who have benefitted from the free tuition law in Academic Year 2021-2022.

“Even the Technical Education and Skills Development Authority (TESDA) which provides free technical education for the youth got a 310-million-peso budget cut,” Santos added.

Both youth formations called on their fellow progressive youth and students to unite against budget cuts they affirmed being a threat to their rights and welfare.

“Budget cuts impair the function of government agencies and force them to look for other means to make up for the lack of funds. We must unite in our call to allocate greater state subsidy for education, health, social protection and other social services,” Santos ended.