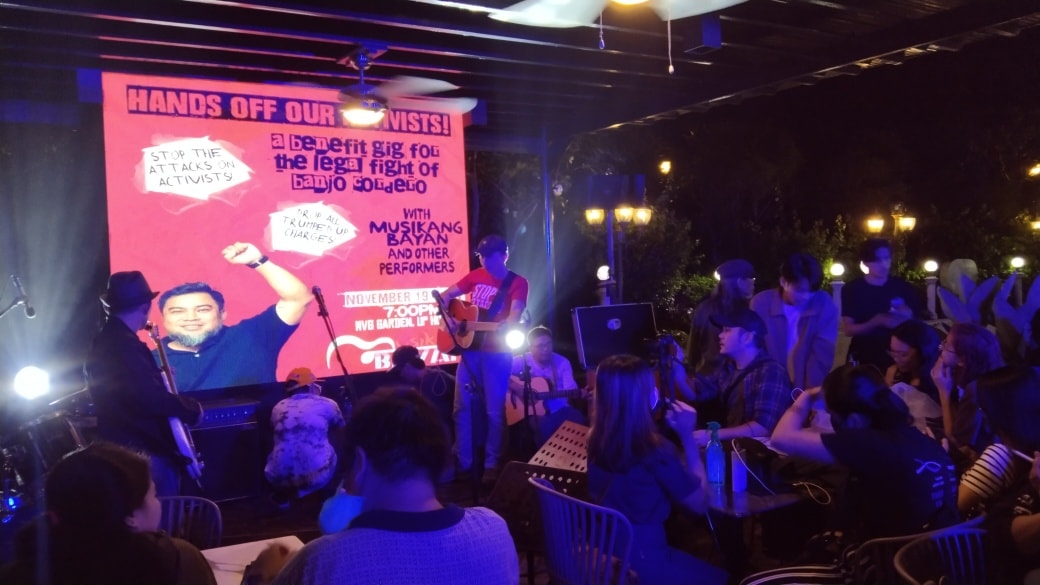 On November 19, kin and supporters of labor organizer Banjo Cordero joined the benefit gig held in MCG garden at UP Hotel for his legal support after being arrested last October 26.

Cordero was then released after posting bail. He was detained for two nights and two days of detainment at Quezon City (QC) Police Station 6 in Batasan for alleged frustrated homicide raps.

Musikang Bayan, Sining Bugkos among other artist groups and cultural workers performed in the benefit gig.

Accordingly, the said gig intended to amplify the calls to drop all trumped-up charges as well as to stop the attacks against activists.

[“Obviously, their so-called charges to silence our free expression is just a figment of imagination. Because our leader’s stance is strong along with various sectors, it is a big challenge for us to face the current society]

Cordero is the current chair for QC Development Council – Labor Sector and for Sandigang Manggagawa sa Quezon City (SMQC) whose members include labor organizer Rodrigo Esparago (arrested on December 10, 2020 and was released on March 5, 2021 with journalist and Reporters Without. Borders Independence Prize nominee Lady Ann Salem) as well as labor organizer and political prisoner Bob Reyes who is still imprisoned at Camp Bagong Diwa in Taguig.

Atty Louie Santos, Cordero’s legal counsel, said that his legal battle still continues and called for continuous support among friends and rights defenders not only for Cordero but also to the rest of activists under attack and political prisoners.

Cordero also delivered a speech in the program, emphasizing the overkill incident during his arrest. He also called on to support the ongoing battle of political prisoners Ram Carlo Bautista, Reina Mae Nasino and Alma Moran of Tondo 3 alongside Mark Ryan Cruz, Romina Astudillo, Jaymie Gregorio, and Joel Demate of Human Rights Day 7.

[Their aim is to create a chilling effect so that those like me who are legally organizing among the workers will fear and stop. Just like I mentioned when I was released, they have many ways to stop us but we have many reasons to continue]

On November 21, Cordero will be arraigned at the San Mateo Regional Trial Court.