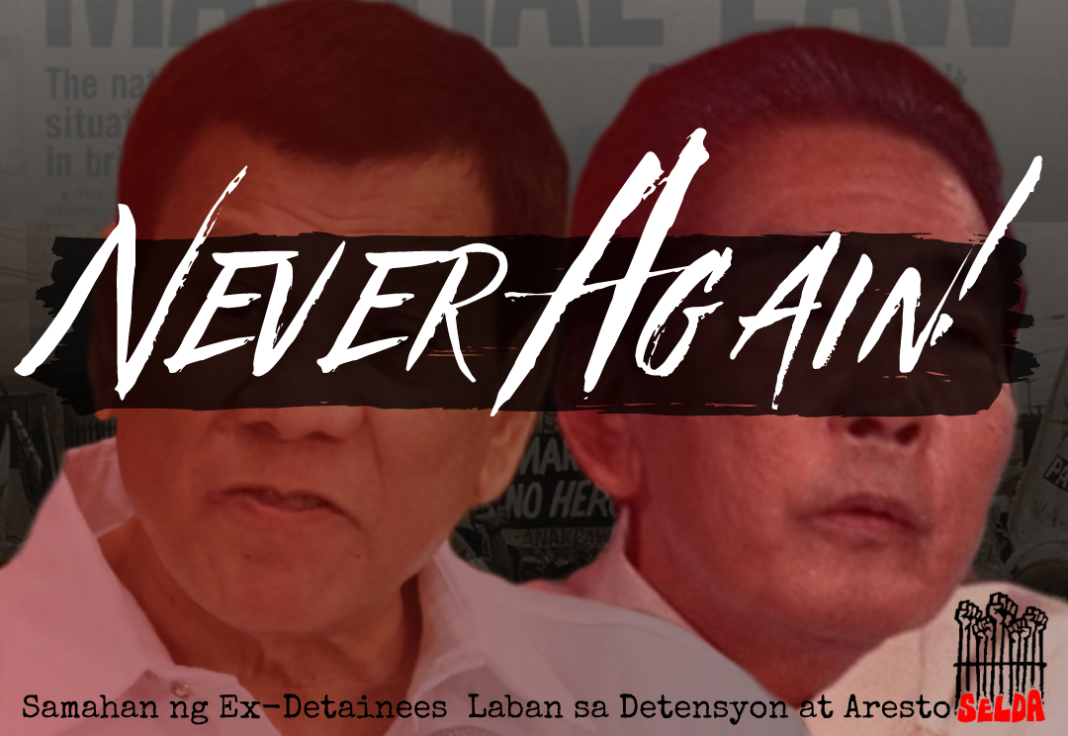 Samahan ng Ex-Detainees Laban sa Detensyon at Aresto (SELDA) vice chairperson Danilo Dela Fuente stressed that the ill-gotten wealth of the Marcoses and the pandemic corruption were the principal reasons as to why poverty is still rampant to this day.

[This is because the Marcoses have not returned P 10 billion ill-gotten wealth, the misspending of the budget as flagged by the COA report, budget of the NTF-ELCAC – who threatens, red-tags, imprisons and kills us – and the anomalies with Pharmally, whose services the government contracted.]

Meanwhile, Campaign Against the Return of the Marcoses and Martial Law (CARMMA) spokesperson Judy Taguiwalo also weighed in on these issues and called them a ‘heinous crime’.

[We can consider corruption as a heinous crime amid the pandemic, we see how many are hungry. Many have gotten sick but cannot afford to go to the hospital. Especially when there is a surge, we just see them die on the side, at the parking lot. Medicines are so expensive.]

On November 9, 2021, SELDA and CARMMA held a protest in front of the Supreme Court to call for the long-overdue resolution on Imelda Marcos’ graft conviction.

The groups urged the High Court to uphold the 2018 Sandiganbayan ruling, convicting Marcos on seven counts of graft related to P10 billion government funds that Marcos funnelled to several Swiss foundations from 1968 to 1986.

Only P174.2 billion of the ill-gotten wealth of the Marcoses have been recovered during the last 35 years or since EDSA People Power in 1986. The Philippine Commission on Good Governance is still running after P 125.9 billion more in ill-gotten wealth that is still under litigation.

In 2003, the Supreme Court defined the ill-gotten wealth of the Marcos family as those in excess of their total legal income of around $ 304,000 only from 1965 to 1986. CARMMA, in 2016, said this belies the claim of then-vice presidential candidate and current presidential aspirant Bongbong Marcos that the wealth of his father came from his law practice.

CARMMA said the Marcoses pocketed a whopping $352 million through these foundations.

“13,538 COVID patients experiencing severe symptoms can avail of costs in a private hospital amounting to PhP1.3 million per patient. At least 1.76 million poor Filipino families can have PhP10,000 each – an amount that can barely make ends meet but cash aid nonetheless – from the $352 million. With this staggering amount, one wonders how much more money the Marcoses are keeping, and how these public funds should have benefited the Filipino people,” said CARMMA in its press statement.

Duterte is known for being a staunch ally of the Marcoses and also professes to idolize the late dictator, once saying Marcos was “the most enterprising president we ever had.” But the connection may be more than just inspiration.

In 2019, a group of researchers from Rappler led by investigative journalist Gemma Mendoza uncovered the systematic connection between Marcos and Duterte’s propaganda networks, leading to the spread of disinformation about Marcos’ ill-gotten wealth and the realities of martial law on social media.

This was also the same network that helped Duterte in his social media campaign back in the 2016 presidential elections.

It was also through Duterte that the former dictator was buried at the Libingan ng mga Bayani. Taguiwalo called this a ‘gateway’ for the Marcoses to redeem and restore their integrity.

[They have a sponsor. And we saw who facilitated that. One of the first official acts of the Duterte regime is to allow the burial of the dictator in the Heroes’ Cemetery. This cleared the way for their restoration.]