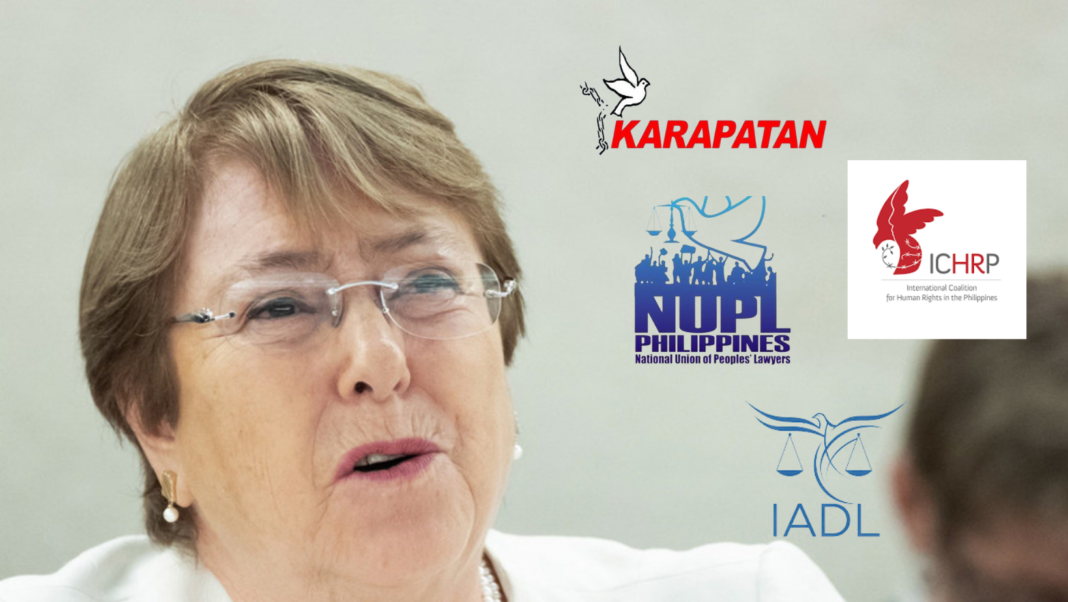 Various groups welcomed the October 7 Oral Report on the Philippines Human Rights Situation by the United Nations (UN) High Commissioner on Human Rights Michelle Bachelet to the UN Human Rights Council (UNHRC) 48th session as it noted the continuing and severe human rights violations in the Philippines, amidst and despite the ongoing UN Joint Programme in the country.

Bachelet said she remains “disturbed by reports of continuing and severe human rights violations and abuse across the country” and “deeply concerned by continual reports of so-called ‘red-tagging’ of human rights and environmental defenders, journalists, union activists, church workers, and humanitarian workers.”

“We note and appreciate her views on the lack of accountability for the killings and rights violations in the counterinsurgency program; continuing harassment, threats and killings of human rights defenders, church workers, environmental and land rights defenders, journalists, lawyers; killings of 9 indigenous Tumandok leaders and 9 killed during the Bloody Sunday operations; and the red-tagging against activists, media and other actors,” said human rights group Karapatan.

National Union of Peoples’ Lawyer President Edre Olalia said the High Commissioner virtually rebuffed the government while using diplomatic language when she said that the ICC developments give a “sharp focus on the ability and willingness of domestic remedies.”

“The subtext is apparent: the domestic remedies remain unable, unwilling and even ineffective to bring impartial, concrete and measurable justice to the victims,” said Olalia.

“The International Coalition for Human Rights in the Philippines (ICHRP) fully endorses High Commissioner Bachelet’s comment that the decision of the International Criminal Court Pre-Trial Chamber to open an investigation in the Philippines is a significant indication of the inadequate, if not non-existent, domestic remedies in the country,” said the group in response to Bachelet’s report.

The Philippine delegate’s response affirmed commitment to the “UN Joint Program on Human Rights as a model for constructive engagement between a sovereign Member State and the United Nations.”

As per the Philippine delegate, the three-year Joint Programme will center on:

The International Association of Democratic Lawyers (IADL) said the UN Joint Programme appears laudable on paper, but “the reality on the ground does not indicate any substantial positive effect.”

“The killings, illegal arrest and searches, and hate speech against human rights defenders, activists, dissenters and poor drug suspects continue unabated. The policies and practices that enable such violations persist,” the group said.

They noted that three more lawyers, two of them human rights lawyers, have been murdered since the UN Joint Programme started in July.

In reaction, Olalia who is also IADL transitional president said, “As expected, the government went into chest-thumping over the UN Joint Programme, welcoming new sources of funding and betraying that it is mainly a technical approach to the problem rather than for the establishment of responsive institutional and policy measures.”

The Philippine delegate also reported on police reforms. It enumerated:

But for Karapatan, the war on drugs review panel is “a little too late.”

“Thousands of lives have been claimed and their kin have been crying out for justice for the last five years. The recent court acquittal of 19 police personnel in [the] killing of Albuera mayor Rolando Espinosa adds to the numerous other cases filed in courts by victims and their families, wherein there is almost nil delivery of justice,” reacted the group to the Philippine delegate’s response.

The Philippine delegate also blamed or gaslighted the victims for their alleged failure “to explain the deaths of their young members in military encounters with the NPA and their refusal to dissociate themselves from and denounce the terrorist group CPP-NPA-NDF for its acts of aggression and atrocities” in response to the issue of red-tagging.

“The formal response of the Philippine Delegate demonstrated that the Duterte government continues to reject any criticism of its human rights record, doubling down on its use of red-tagging to terrorize any critics by alleging without evidence that they recruit fighters for the New People’s Army,” commented ICHRP.

“[The Philippine] Mission again stuck to its untruthful narrative on red-tagging, justifying it without remorse and continued to assume the pretentious posture that human rights issues must be ‘depoliticized,’” said Olalia.

The Philippine delegate also said that they have “cautioned the groups that have misrepresented the situation in the Philippines and issues of our indigenous communities under the cover of human rights defenders” which ironically meant to deny the human rights violations reports already acknowledged by the UNHCHR.

“There is nothing new in the Philippine government representative’s statement as it remains characterized by victim-blaming and glossing over of various issues in relation to domestic accountability measures,” said Karapatan.

Those are among the reasons the current HRC resolution, even the UN Joint Programme, does not address the worsening human rights situation in the country and stressed the need for an international independent investigation, the group said.

IADL also expressed concern that the UN Joint Programme will not provide concrete and effective remedies and accountability, and might be instead used by the Philippine government to “window dress impunity, resulting in paltry and belated investigations.”

The group asked the UNHRC to initiate its own independent investigation “before more people are killed or persecuted.”

“In the wake of the worsening human rights situation, ICHRP reiterates the recommendations of INVESTIGATE PH, including the authorization of an official international investigation of human rights violations in the Philippines,” said ICHRP in its statement on October 7.