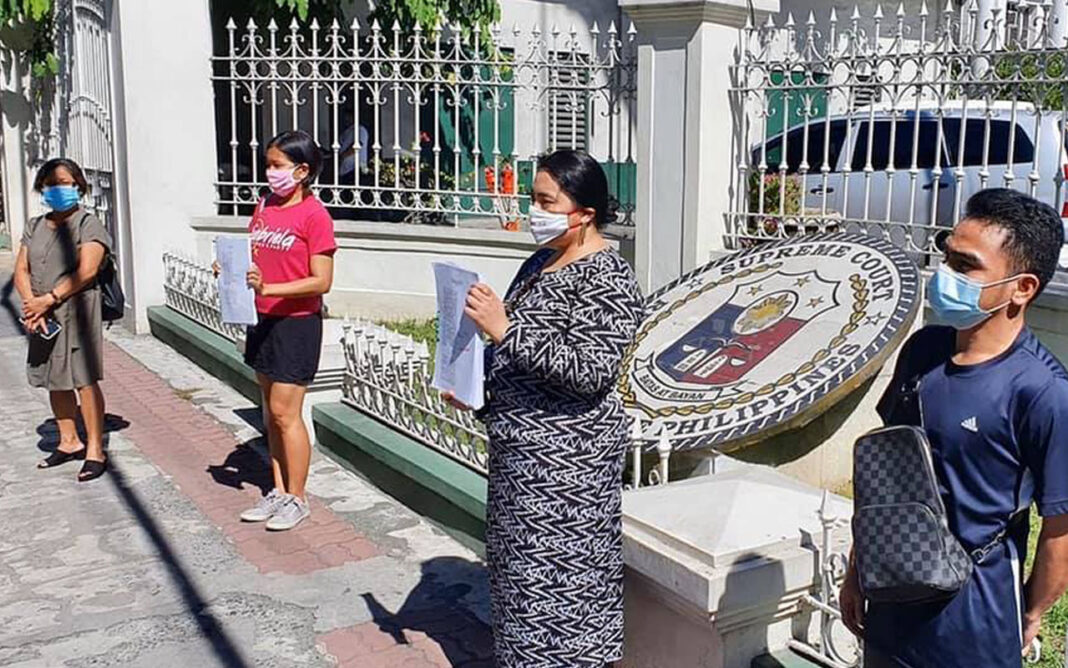 The petitioners said that the “unfaltering reliance on militaristic policies resulting in its failure to protect the people’s right to health has led to the filing of the petition for mandamus.”

“The omission of proactive and efficient mass testing amid the COVID-19 pandemic has shown that a systemic and normalized violation of the right to health engenders the impairment of other human rights and liberties, such as the rights to travel, livelihood or work, education, and access to justice,” say the petitioners in the 77-page petition.

Citing the right to health under the Philippine Constitution, petitioners argued that testing should be made free, available, and accessible to all suspect cases, all contacts of probable and confirmed cases, frontline healthcare workers, and high-risk and vulnerable communities.

The latest COVID-19 “expanded testing guidelines” of government released on June 11, as contained in Department of Health (DOH) Memorandum No. 2020-0285, broadened the coverage of persons to be tested to include suspect cases, frontliners indirectly involved in healthcare provision in the response against COVID-19 and other vulnerable patients such as those with comorbidities, those who will undergo high-risk, elective surgical procedures, those living in confined spaces,

However, subgroups who are eligible for testing are still ranked from greatest to lowest need for testing. The Health agency also said during the announcement of revised guidelines that only those who had direct contact with probable and confirmed COVID-19 cases are eligible.

In the testing guidelines that was replaced on June 11, only those with severe and mild symptoms and probable cases were eligible for testing. Not all frontliners, especially frontline health care workers, were included—only from those with severe symptoms, with mild symptoms with travel history/contact and/or considered vulnerable, up to those with no symptoms but with travel history/contact were included.

The average actual tests done per day in the last 10 days has reached 15,500, up by 2,000 to 3,000 since the last week of June. But this is still far from government’s 50,000 per day actual tests done target in early June. Only the “rated capacity” has reached 50,000 before June ended. Rated capacity refers to the possible number of tests that all of the government-accredited COVID-19 laboratories can run, not yet taking into account operational problems.

Petitioners also sought government’s release of accurate, timely, and complete information on the country’s COVID-19 situation. They expressed concerns over the “incomplete, inaccurate, and confusing DOH data” used as basis of the COVID-19 policies.

“Without accurate and timely information on the extent of community transmission of COVID-19, the government lacks proper grounds for any policy pronouncement. These irregularities lessen the confidence of the public in the ability of the DOH (and government in general) to deal with the pandemic with transparency and integrity.”

One Inter-Agency Task Force on Emerging Infectious Diseases (IATF) Consultant was asked to resign following his online rant about the DOH who has “lost focus” in addressing the pandemic and the department’s unreliable and delayed reporting of confirmed COVID-19 cases.

The National Union of Peoples’ Lawyers – NCR chapter served as their counsel.