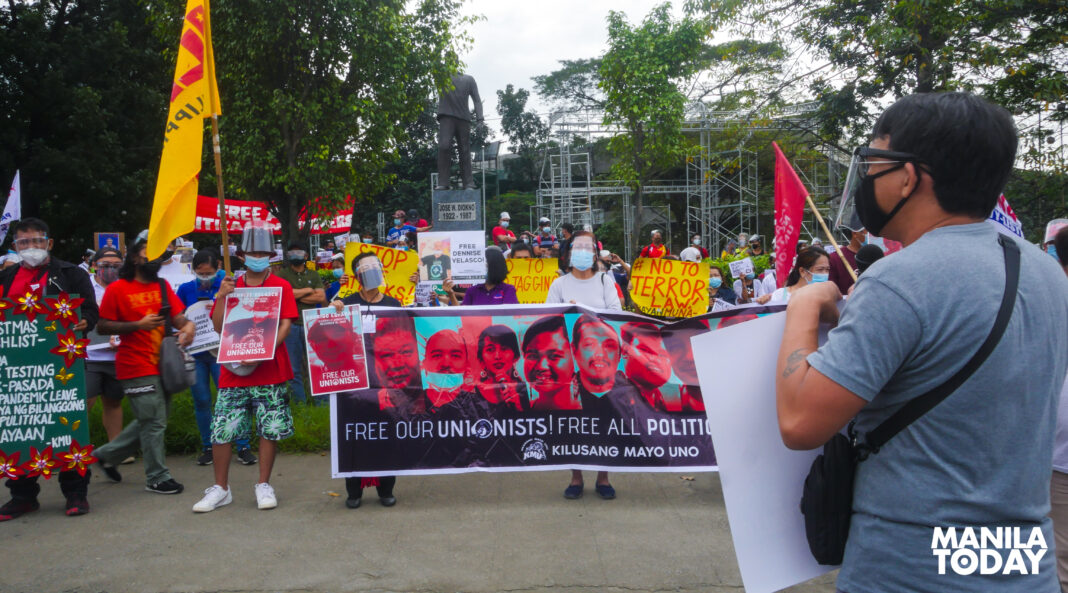 Labor union, youth groups, and human rights defenders trooped at the Commission of Human Rights in Quezon City to stage a mobilization protest following the Global Day of Action to decry state terrorism in view of the widening crackdown against activists and dissenters.

The protesters carried placards bearing calls such as “Free All Political Prisoners,” “Free Lady Ann Salem”, “Junk Terror Law” among other demands and thus expressing firm indignation and urging for the immediate release of #HRD7 and all political prisoners apprehended under the Duterte administration.

Along with this, an international online protest led by global organizations and Filipino groups overseas was conducted in the similar line to free the #HRD7.

The #HRD7 included Manila Today editor Lady Ann Salem and other six trade unionists arrested in the Human Rights Day commemoration last December 10 over alleged possession of firearms and explosives. Such seized evidences the protesters lambasted, saying that those were evidently planted and fabricated.

They further stressed that the elements of police were the actual representation of “plantitos” despite its known meaning referred to someone who is a plant lover or a green thumb.

“No future under Duterte.”

“All eyes are on the Philippines right now as the Filipino people are facing the worst human rights violations against them, with activists and critics as easy targets,” KMU chairperson Elmer “Ka Bong” Labog asserted.

KMU furthered that the toiling masses and advocates bear the brunt of state terrorism in line with efforts of vilification, harassment, and apprehension, if not brutally killed.

At least 50 workers and almost 300 peasants have been killed by both elements of Armed Forces of the Philippines (AFP) and Philippine National Police (PNP), said KMU. Their deaths the labor group accounted as the “Duterte legacy” which means “a legacy of death preluded by perilous practice of red-tagging and vilification.”

“Duterte is desperate to keep himself and his clique in power beyond 2022. He is hellbent in silencing the opposition to sow fear among the people in order for them to perpetuate fascist rule,” Ka Bong added.

Ka Bong also noted that if Duterte will remain in his power, the people are “to expect greater poverty and injustice as the regime railroads tax policies, opening up of our resources and other anti-people, profit-driven measures.”

“No future under Duterte. We must act soon enough to end his reign of tyranny and terror. Enough is enough,” Ka Bong concluded.

“Maniningil tayo,” a short clause but has a striking thought was delivered by National Union of Journalist of the Philippines Deputy Secretary General Raymond Villanueva.

[We will make them pay for this]

Villanueva slammed the charges against the arrested journalists saying that they have only had their pens, cameras, even laptops as a gear when doing coverage or reportage.

Such stories produced must have significance and relevance as salient principles of what is beneficial upon advocating the rights of the people, most especially the marginalized to underserved communities.

[In our country, most especially under the regime of Rodrigo Duterte, there have been a lot of journalists killed]

It must be noted that the media watchdog Committee to Protect Journalists (CPJ) reported in its Global Impunity Index 2020 that the Philippines is now ranked as the seventh worst country in the world upon solving media killings. In fact, just last month, the most recent was Ronnie Villamor named as the 19th journalist slain under Duterte’s watch and 191st since 1986.

[On the other hand, there are also those arrested upon utilizing laws such as cyber-libel, criminal libel, and other sorts of laws in order to to silence the press]

Icy was the third journalist arrested under President Duterte’s watch over illegal possession of firearms and explosives—similar to the charges against critical journos like Anne Krueger of Paghimutad and Frenchie Mae Cumpio of Eastern Vista.

[We cannot blame journalists like Frenchie Mae and Lady Ann who are activists, as it is only right. True and excellent journalism always take the side of the underserved and the oppressed]