Home CULTURE FQS@50 concert: A night of rage and remembrance 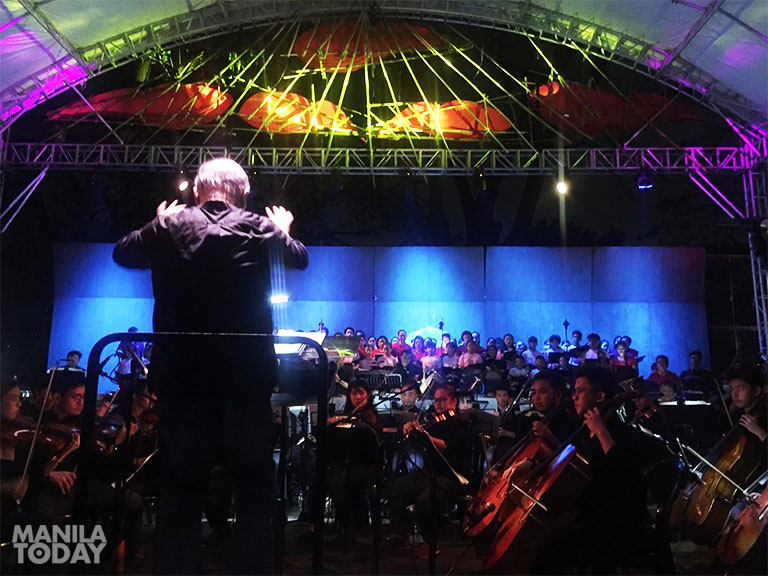 Despite the rain, hundreds of people gathered outside the Palma Hall of University of the Philippines on the evening of February 7. They were there to commemorate a very significant yet largely overlooked event in history books.

The UP Diliman Arts and Culture Festival kicked off with the outdoor FQS@50 concert held at the Palma Hall on February 7, 2020.

The festival carries the theme “Makita Kang Sakdal Laya,” [See you completely free] a tribute to the 50th anniversary of the First Quarter Storm of 1970. The festival aims to raise awareness on the significance of the FQS and its role in shaping the consciousness of the youth.

[Here in UP Diliman. Here at the AS Steps. In Palma Hall. At this road’s stretch, First Quarter Storm was formed in 1970.]

The Gathering Storm in an unquiet night

Toym Imao’s installation piece called “The Gathering Storm” adorned the entrance of Palma Hall. Classroom chairs were hung high above to form an ominous crimson cloud. The chairs symbolize youth unrest as such were used as barricades in the Diliman Commune of 1971. The artwork served as visual centerpiece of the concert.

[We are gathered here today to commemorate the heroism of our fellow Filipinos and peoples’ scholars who showed extraordinary bravery and grit fifty years ago during the First Quarter Storm.]

The entire concert was performed almost entirely by UP’s homegrown cultural groups and talents. Cultural Center of the Philippines Artistic Director Chris Millado was at the helm as director of the concert while FQS veteran Ilagan penned the script and Prof. Chino Toledo served as musical director.

The audience were treated with politically-charged songs all throughout the evening.

The concert was divided into three acts.

“Anak ng Bayan [Nation’s offspring],” a song about a young activist heeding the call to serve the people, was also performed.

Rodolfo Vera performed the FQS medley along with the UP Symphony Orchestra, UP Singing Ambassadors and the UP Staff Chorale. Included in the medley are such notable songs as “Pag-ibig sa Tinubuang Lupa [Love for the motherland],” “Mendiola,” “Tamad na Burgis [Lazy bourgeois],” and “Ang Masa [The Masses].”

Vera was once artistic director of protest choir Patatag. The choir was established in 1984 at the peak of the struggle against the Marcos dictatorship.

The song “Bella Ciao,” was sung by children’s choir UP Cherubim and Seraphim. Originally an Italian protest song of rice paddy workers of the 19th century, it was adapted as a hymn of the antifascist resistance during World War II. The piece performed that night was the Filipino version.

Indeed, many UP students fought Marcos’ tyrannical regime and offered their lives to the cause of freedom. Amongst those early martyred during Martial Law are notable students from UP Diliman such as Lorena Barros and poet Emmanuel Lacaba, to name a few. Over the next four decades, this spirit of selflessness is imbibed by generation upon generation of UP student activists.

It is this radical tradition that has earned the ire of President Rodrigo Duterte himself, who once threatened to kick out activists off the university in February 2018.

UP Diliman President Danilo Concepcion said that the university will continue educate the people about Martial Law.

[In the next few months, we will witness the groundbreaking of a Martial Law memorial to be built not only as a museum but as a reminder that the horrors of martial law should never happened again.]

The museum, aptly named Freedom Memorial Museum is set to open by 2022, the 50th anniversary of Martial Law.

Concepcion said there will also be fora and discussions about the topic in the months to come.

[These may not bring back the lives lost, neither will it compensate for the tragedy experienced by the thousands imprisoned, hurt and tortured by the state, UP will remain a defender of rights and freedom, as in the days of Diliman Commune. UP’s oath to serve as guide to fellow Filipinos will remain unchanged.]

Incoming UP Diliman Chancellor Fidel Nemenzo praised the timeliness of the concert.

[UP’s strong tradition of participation in struggle is clear to me. The 1986 People Power Revolution that overthrew the Marcos regime did not start in the killing of Ninoy Aquino in 1983. It was only part of the history of that long struggle where the 1970 FQS is an important milestone.]

Repression under the Duterte Regime

[UP is being attacked these past few months because our oppressors know the important role of UP in upholding freedom.]

He mentioned the raid in the office of progressive groups and an alternative media outfit in Tacloban just a day before this commemoration concert of the FQS.

The concert may be over but the human rights situation in the country is pushing for another storm.

[As the new generation of youth, it is a big thing that we felt the value of FQS. FQS contributed to the present young generation’s pursuit for change in society.]

In a symbolic gesture during the program, FQS veteran Bonifacio Ilagan, while unfurling a red flag, announced that he was chairperson of Kabataan Makabayan from 1970 to 1971. He then handed over the flag to a young man in his 20s.

As the program drew to a close, a decades-old chant resonated through the air as activists pumped their fists in the air.