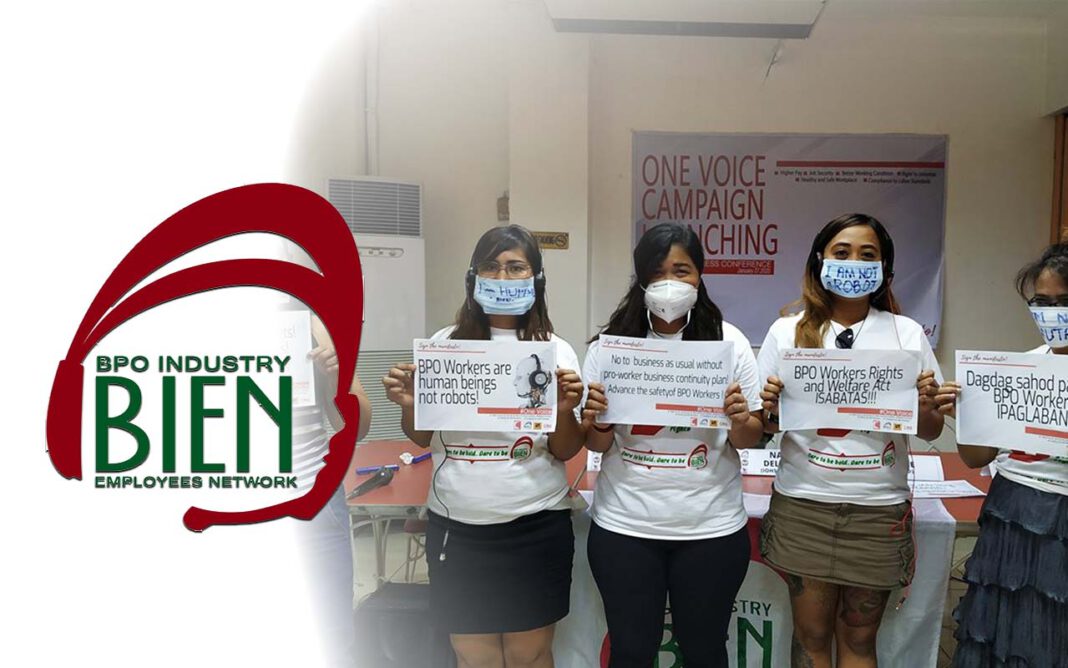 An online survey with 146 respondents conducted by the BPO Industry Employees Network (BIEN) from May 19 to May 26, 2020 revealed that 37.7 percent or roughly 4 out of 10 BPO workers are either in floating or “no work-no pay” (NWNP) status.

This means temporary job loss for a lot of BPO workers as a result of various factors related to the COVID-19 pandemic lockdown.

The group observed that there seems to be a slightly  higher proportion of women who are in NWNP or floating status than men. Two of every three employees in NWNP status are women while 7 out of 10 of those in floating status are also women.

Only 4 respondents said they continue to get paid even if they are unable to come to work.

The respondents cited that client pull-outs, lack of transportation during the lockdown, and very strict lockdown rules as some reasons why they are currently out of work. Even workers who were willing to work from home remain out of work due to internet connectivity problems, lack of equipment and related support from their companies, or simply because their company’s clients do not allow working from home.

Of the 55 respondents who are in floating or in NWNP, 51 of them said that their company is continuously hiring new employees. Only seven of the workers who are in NWNP status were able to avail of government cash assistance while 15 said they did not receive government assistance neither in cash nor in kind. Meanwhile, 10 workers said that they were able to receive some kind of financial assistance from their companies.

By the end of the second extention of the lockdown on May 15, BIEN publicized their observations that many BPO companies are continuously hiring new agents even as many of their current employees are placed in NWNP or floating status.

“This is unfair and goes against our right to secure jobs. We strongly reject this exploitation of flexible labour of some BPO companies which is only self-serving. Especially in this time of pandemic, companies should practice due diligence, and show compassion to its employees by providing financial support and find ways so workers can continue working safely in the time of pandemic,” said BIEN President Mylene Cabalona.

Many BPO workers need not be displaced or lose their livelihood if only companies and the government will prioritize workers’ needs and uphold our right to secure jobs, the group stressed. They said companies should keep their workers safe from COVID-19, provide work-at-home options, door to door transportation or near-site accommodation.

“BPO workers who are floated but whose companies are continuously hiring new agents should prioritize workers in floating status, provide them with ample technical and logistical support, so they can be transferred to a new account,” Cabalona added.

Meanwhile, BIEN also dispelled the popular notion that BPO workers are better off during the lockdown.

“Many BPO workers are just living from paycheck to paycheck. Salaries in big call centers can be as low as P12,500 a month in Metro Manila, way below the living wage of P32,000 a month; so it is difficult to imagine how BPO workers can have enough savings to survive months without any financial support or without having any source of income.”

The starting salaries of some BPO workers are comparable to minimum wage in Metro Manila, highest in the country at P537 a day or P 11,000 to P13,000 a month (for 20-24 days of work as most minimum wage earners are also at no work, no pay status).

“In fact, displaced BPO workers immediately applied for government assistance such as CAMP and SAP but only to be rejected because they work in BPOs. While we fully understand that the nation is facing a great challenge because of COVID19. But we BPO workers are no less affected by it,” Cabalona said.

BPO companies should also provide displaced BPO workers with additional paid leaves and some form of financial assistance and the government can mandate this, the group urged. There are a few companies like Quantrics and Telus who provided partial salaries to their employees during ECQ however, there are more BPO companies who just leave workers with no income.

At the end of May, BIEN talked about the work-from-home set up option in the BPO industry. As many BPO companies shifted from on-site to work from home arrangements due to the pandemic, BPO workers found themselves facing a ‘new norm’ with a new set of challenges characterized by a tighter race for productivity and flexibility that drags down wages and  attacks right to security of tenure, according to the BIEN.

“The deafening silence of the Department of Labor and Employment (DOLE) and the absence of mechanism to monitor employment woes are adding insult to injury for the part of the BPO workers. We call all stakeholders to address these workers issues. Do not abandon the workers who have long contributed to our nation’s economic growth.” BIEN Vice President Sarah Prestoza said.

The group said that setting up work from home didn’t go so smoothly for workers even if their companies provide this option for their workforce.

“Some BPO companies did not even bother to assist their employees to set up work at home arrangement which should have been proactively initiated by the companies and not by the employees. It was disheartening to hear stories of workers walking long distances from home to office just to pick up equipment. The absence of public  transportation made this task doubly difficult as workers also become exposed to COVID-19,” said Prestoza.

Some call center companies even pass on the internet and electricity expense to their employees. Of course, work-from-home or work-at-home agents also had to bear the brunt of poor internet connection in the Philippines especially outside Manila.

While some workers said that they have other family members who are still working, many (21 of those in NWNP status) have resorted to borrowing money from relatives, lending institutions, SSS or PAGIBIG in order to get by. A few of them also had to look for alternative sources of income like online selling or looking for other jobs. Workers also lamented that their limited savings are running dry and they have to use all sorts of belt tightening measures in order to survive.

When asked about what their company and government should do to assist workers who are in NWNP, BPO workers said that the government should provide assistance to all and not only to a targeted population during this pandemic. Workers/respondents also suggested that companies should either provide them financial assistance or needed support for work from home arrangements so they continue with their jobs.

The group re-launched its campaign for the passage of BPO Workers’ Act alongside other policies that can advance the rights of BPO workers especially in the midst of successive disasters and protect workers’ job security in light of the industry shift to automation.

That was at the end of January this year, just as the outbreak of COVID-19 cases in Wuhan would be determined and the Philippines would confirm its first case on January 30. Along with everything else the pandemic and the lockdown affected, that may have been also put on hold while BPO workers have been lobbying for this for a long time.

“The fact that there are varying estimates in terms of potential job losses in the industry–ranging from 43,000 to as much as 800,000 can be confusing. And without new policies in place, it will be easier for companies to use tech shift and just neglect workers right to secure job and others,” Cabalona said.

Cabalona also mentioned that calamities such as the Taal volcano eruption in January also underlined the need for clearer regulations in terms of how workers’ safety can be protected from management abuse of its prerogative. In calling for better working conditions and a legislation for BPO workers’ rights, the group reminded: we are not robots.

But like anything else during the lockdown and the pandemic, the dire situation of BPO workers were only amplified and exacerbated.

The online survey was conducted using Google forms. Respondents were conveniently selected and targeted thru Facebook ads. Of the 146 respondents, 110 were from Metro Manila, 12 from CALABARZON (Laguna, Rizal and Cavite), 7 from Region III (Clark and Angeles Pampanga), 8 from Cebu, 7 from Bacolod, 1 each from Iloilo and Davao City. Forty-two percent are aged 20-29 years old, forty one percent are 30-39 years old, 16 percent are 40-49 years old and 1 percent 50 and older. Sixty three percent of the respondents are women.

BIEN said, “Although the survey is not representative and only captured a small sample, the results are still illustrative of the challenges faced by BPO workers during the pandemic, according to BIEN. The group then reiterated its call to BPO companies to stop floating or NWNP while hiring new agents and provide additional paid leaves to their employees. Likewise, BIEN also called on the government to include all displaced workers including employees from the BPO industry in its aid programs.”