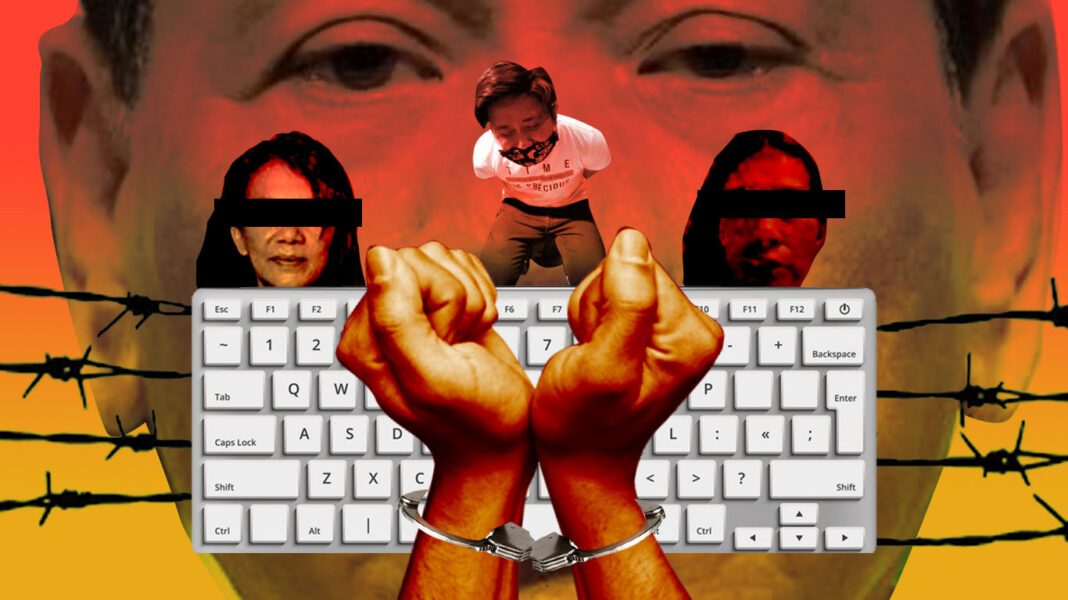 The nationwide lockdown has encroached on many of the people’s freedoms, and along with a strict stay-at-home order, freedom of speech was put on lockdown as well.

From the lack of mass testing to uneven implementation of laws, the failure to provide aid, and the president’s often erratic and rambling weekly reports, the people have more than enough reason to be dissatisfied with the Philippine government. With no end to lockdown life in sight, the people’s grievances can no longer be contained. They could, however, be detained for them.

The Philippines has consistently been ranked among the most dangerous countries for journalists, with 13 being killed under the Duterte administration alone. With R.A. 11469, or The Bayanihan to Heal as One Act (Bayanihan Act), citing spreading of fake news and fearmongering as punishable offenses, the heavy hand of the Philippine government has been felt by civilians as well, with 32 having been arrested just by the first week of April.

Metro Manila was placed under general community quarantine on June 1 – a more relaxed lockdown than the enhanced community quarantine it was under for 77 days and earned it the record of longest lockdown in the world. It could have been the period that freedom of speech was on lockdown as well. The Bayanihan Act, however, is still in effect until the 24th of this month.

Congress failed to pass the extension of emergency powers of the president, the Bayanihan to Recover as One Act, when it adjourned sine die or indefinitely yesterday. It sought another three-month extension or until September. But they could always convene a special session to pass it like they did for the original emergency powers.

Yet we all know how Congress was able to railroad the anti-terrorism bill and it could be a better replacement for the fake news provision in the Bayanihan Act to deter people from speaking out or having an opinion, if not to penalize them as was done during the lockdown.

Among those included in the first wave of arrests related to fake news was Cebu artist Maria Beltran who shared a post on Facebook alleging that 9,000 have already contracted COVID-19 in Sitio Zapatera, Cebu City. Especially at the onset of the pandemic, authorities were slow to address a quickly escalating situation, prompting people to scramble for any information they could get. But instead of transparency in information dissemination, people were arrested, detained, and endangered through exposure.

An overseas Filipino worker in Taiwan, Linn Ordidor, remained abreast of news and current affairs in the Philippines. After uploading openly critical content on her social media, the government was quick to pressure Taiwan into having Ms. Ordidor deported – a move summarily rejected by Taiwan, who vowed to protect its people’s freedom of expression.

Last 11th of May, a teacher was arrested for a Twitter post, made in jest, offering anyone P50 million to anyone who can kill President Rodrigo Duterte. Another who posted to double the bounty–money he does not have–was charged with inciting to sedition. Meanwhile, citizens were quick to point out that the same sentiments directed at Vice President Leni Robredo are repeatedly regurgitated by troll accounts with little to no fanfare.

There was also the case of teacher Juliet Espinosa who expressed distress over the government’s failure to provide relief and pointed to people where the relief goods. Authorities went after a salesman in his home and arrested him for calling the president ‘buang’ (crazy). Both were charged also with inciting to sedition.

Charges against Anakpawis relief volunteers were reported dismissed on June 1. They, however, continue to face charges for ‘inciting to sedition’ for bringing along copies of Pinoy Weekly, an alternative media newspaper that has been in operation for almost two decades.

The pandemic has not slowed down the administration’s crackdown on human rights defenders and community leaders either. Indigenous leader Gloria Tomalon of Surigao del Sur, and 6 farmers from Batangas were among the many activists detained under the guise of violating quarantine regulations. At least six others were killed, the latest of them was Kadamay secretary-general Carlito Badion.

Meanwhile, the hearing for ABS-CBN’s franchise renewal continue to drag on despite having been filed as early as 2016. Among the government’s reasons for their adamant refusal is the network’s purported negatively biased representation of Duterte, especially in the 2016 elections. If there was one thing the lockdown achieved, it was shutting down ABS-CBN–an event that only happened once before during martial law when media was closed down. June 5, yesterday, was the first month since ABS-CBN was forced off the air and the franchise extension legislation seemed to be far off on the horizon as Congress has adjourned.

Indeed, the Filipino people have many reasons to be critical of the government. In a time when a virus has crippled our normal lives as we know it, we look to the country’s leadership to do what is best for the citizens. People have long clamored for aid, medical services, and mass testing. What people instead received is the hastened reopening of cities and the even quicker reopening of Chinese gambling establishments.

“The prime duty of the Government is to serve and protect the people.”, Section 3, Article II of the 1987 Philippine constitution plainly states.

The people have every right to criticize when the supreme duty of their government is not fulfilled.

With this lockdown and its many iterations firmly in place, that right to express, it seems, is locked down as well.

But while a bird can be caged, its voice, quite simply, could not.