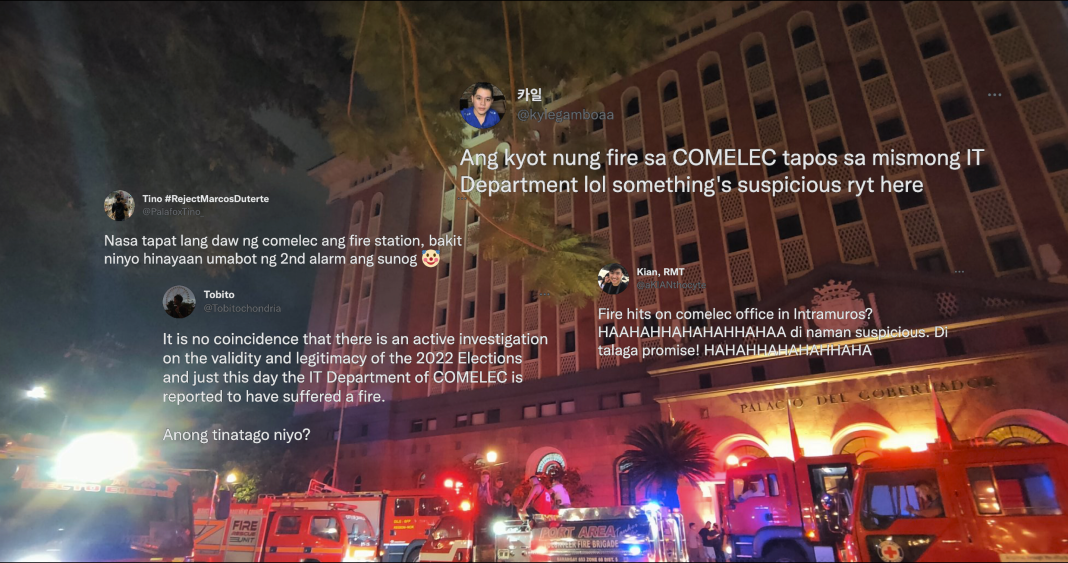 A fire broke out the Commission on Election’s Information Technology Department located at seventh floor of the Palacio del Gobernador building in Intramuros at around 6:48 pm on July 3.

The Bureau of Fire Protection (BFP) meanwhile declared a fire out at 8:16 pm. The poll body also reported that its staff and personnel are all safe from the incident.

While the COMELEC spokesperson Rex Laudiangco assured for secured and safety keeping of servers, vaults, along with the election and voters registration data, the netizens were quick to express their suspicion.

Many were confused as to why and how the fire gutted the COMELEC’s rented Intramuros building  even when the Intramuros Fire Station stood only in front of the said building.

Accordingly, there had only been a “limited damage” without affecting those of the election data.  Laudiangco added that such data also have backups.

“We shall be fully cooperating with the BFP and the Palacio del Gobernador building administration to determine the cause of the fire, and ensure further safety of all COMELEC offices,” Laudiangco noted.

It was in 2007, only months before the legislative and local elections in May, when the COMELEC last caught on fire. The commission then reported that it only destroyed the 2004 related election documents.