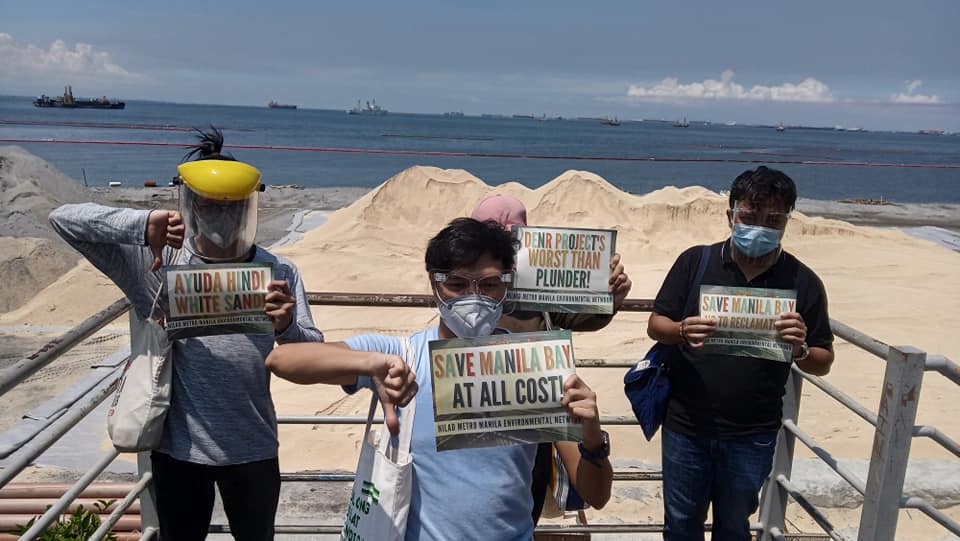 NILAD Metro Manila Environmental Network stood in front of the ‘white sand’ dumping in Manila Bay to slam what they described as ‘artificial beautification’ and ‘fake rehabilitation’ of Manila Bay.

According to the network, the project of the Department of Environment and Natural Resources (DENR) is unnecessary, a frivolous waste of public funds, and destructive to the environment.

The total Manila bay rehabilitation cost is at P389 million. DENR Undersecretary Benny Antiporda said the money was set aside since last year, but he could not say how much exactly was spent on the ‘dolomite sand transfer’.

“The DENR is advised to conduct cleanup drives instead of pursuing this project,” NILAD said in a statement.

The group said that the ‘white sand dumping’ is a reclamation of the coastline of Manila bay, despite government saying no reclamation in the bay is to proceed this year.

“If the government is sincere in rehabilitating the bay, it should cancel all ongoing reclamation projects,” the group said.

Dolomite was mined from Cebu and was crushed and then transferred to Manila. Many said this is not sustainable as the water would wash out the sand. The ‘white sand dumping’ also does not resolve the garbage and the pollution of the water in the bay.

Various groups also said they would sue or hold accountable government agencies and even the local government of Manila for allowing the ‘destructive’ project. Some groups claim said project violated at least five laws: