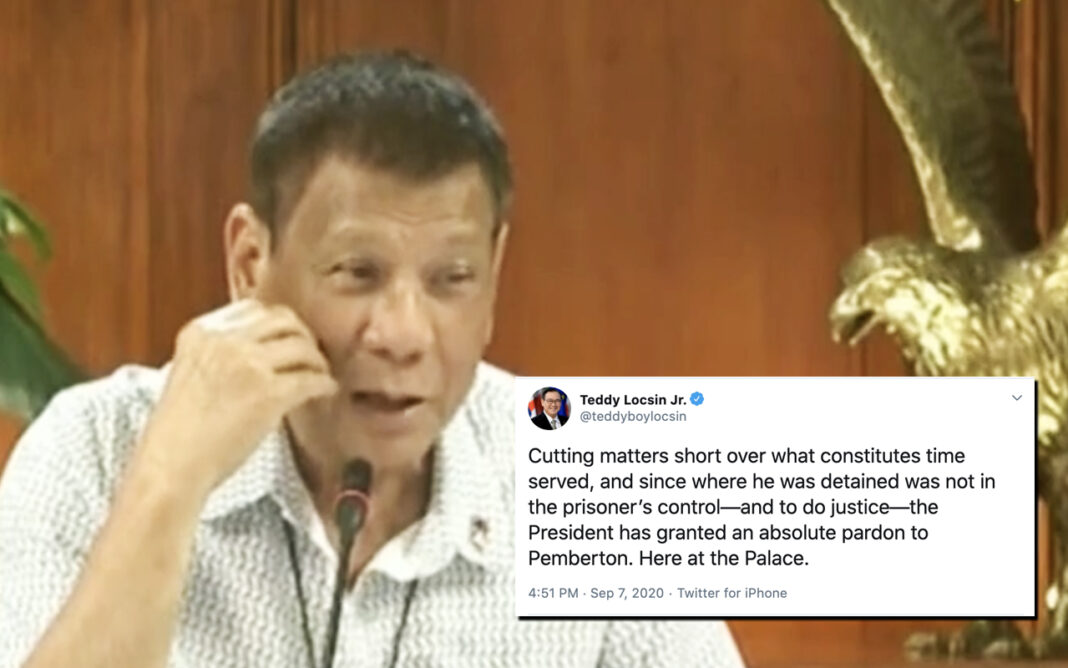 “Karapatan strongly denounces President Rodrigo Duterte’s granting of absolute pardon to convicted US marine Joseph Scott Pemberton as a despicable and shameless mockery of justice and servility to US imperialist interests,” said the human rights group in a statement.

“While human rights defenders, activists, government critics and ordinary folks are being arrested and jailed for all sorts fabricated and flimsy charges, while elderly and sickly prisoners continue to be denied humanitarian release amid a deadly pandemic, Duterte has granted absolute pardon to a transphobic murderer, who has not shown an iota of remorse for his brutal crime,” Karapatan said.

Earlier today, Karapatan Metro Manila trooped to the Supreme Court to follow up the five-month old petition of political prisoners to be released on humanitarian grounds. Chief Justice Diosdado Peralta said to have given his word that a decision on the petition would be released on June 16.

Various groups have also condemned the release of Pemberton due to the Good Conduct Time Allowance or GCTA, after a court has granted his release after serving five of 10 years of his sentence.

“What a brazen and shameless sell-out! Unbelievable. It was obviously timed to pull the rug under everyone’s feet and pre-empt the possibility of any other adverse result to his case while the legal debate is still brewing on the applicability of the GCTA on him,” said Atty. Edre Olalia, National Union of Peoples’ Lawyer President.

[If Pemberton’s lawyer said they, too, were surprised with the pardon, does this mean they did not apply for the pardon and the absolute pardon appears like a blessing from heaven from the President? That this is a unilateral action of the President that Pemberton did not even requested?]

In his televised speech on the evening of September 7, or around three hours after Locsin’s tweet, Duterte said Pemberton was not treated fairly so he ordered his release. He said that the absolute pardon cannot be questioned, or the release of Pemberton via pardon from him now can no longer be questioned.

Duterte also mentioned about a new US ambassador to the Philippines.

From the time news of Pemberton’s early release last week, Philippine prosecutors have been preparing to question and petition the release of Pemberton.

Netizens also drew attention to Presidential Spokesperson Harry Roque being one of the Laude family’s lawyer. Roque, best known before as a human rights lawyer, has been twitted for several actions and policies of the current administration which he has fought against in previous administrations, such as the ‘terror law’ (then Human Security Act).