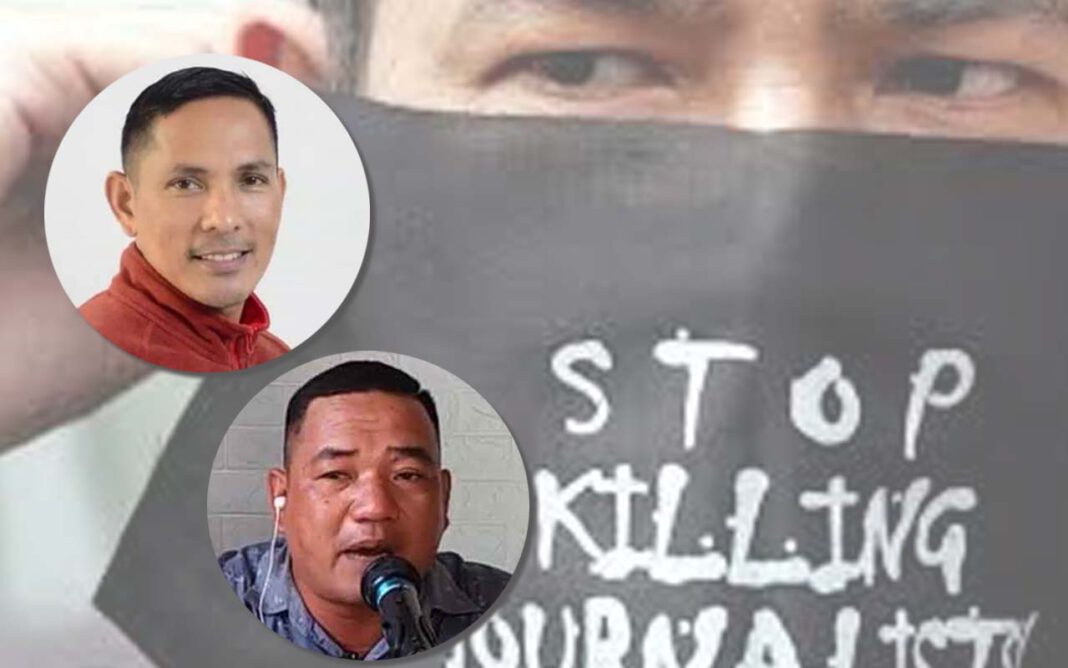 Journalists and media organizations around the world commemorated the International Day to End Impunity on November 2.

The COVID-19 pandemic saw a time when there were attacks on journalists covering the #BlackLivesMatter protests and other political events in the US, clamping down on protests and people’s right to dissent in social media and other platforms in extension of COVID-19 restrictions that various countries imposed, health hazards while covering the pandemic and the resulting job losses and closures in the media industry owing to a period that a large portion of the world was on lockdown.

These were all on top of the longtime problem of journalist attacks and killings, and the emerging problem of gender-based online harassment against journalists.

“This day continues to remind us of how deeply entrenched the culture of impunity is in the Philippines, where 189 journalists have been murdered since 1986 with hardly any accountability for their deaths,” said the National Union of Journalists of the Philippines in its statement.

Journalists murdered
According to the research and data of the Committee to Protect Journalists (CPJ), there have been 1,387 journalists killed through dangerous assignment, crossfire, or murder between 1992 to 2020. Of those killed, 885 were murdered.

This year of the COVID-19 pandemic, the CPJ recorded 22 journalists killed, 15 of them murdered. Of the 15, two are from the Philippines: Rex Cornelio Pepino and Jobert Bercasio.

On May 5, two days after World Press Freedom Day and on the day media giant ABS-CBN was shut down by government, Cornelio Pepino was riding his motorcycle with his wife when he was gunned down by two men on separate motorcycles in Dumaguete City at 8:45pm. NUJP noted he was the third journalist killed in Dumaguete since 2018.

Radio host Pepino, also popularly known as Rex Cornelio, was killed after hosting his regular radio program on dyMD Energy 93.7 FM. Pepino’s radio station said the slain host “spent many years covering the issues that many reporters were fearful to do. His ultimate passion was for good governance and his advocacy was to help save the environment.”

On September 14 at around 8pm, Balangibog TV broadcaster Bercasio was riding his motorcycle in Cabid-an village, Sorsogon City when the attackers shot him five times and then fled, leaving him to die. Various groups noted that Bercasio was shot about 100 meters from the Sorsogon City police headquarters.

Bercasio was a former radio broadcaster and was running Balangibog TV on social media. NUJP noted that Bercasio was killed about one hour after he posted on his personal Facebook page about trucks he said were traveling irregularly from a “quarry area” in Bulan town. The group also said colleagues described Bercasio as a “hard-hitting commentator” who regularly tackled the issue of illegal logging in Sorsogon City on his program “Kurahaw Bicolandia.” He was the 17th journalist killed President Rodrigo Duterte, the 189th since 1986 or when democracy was restored and the Marcos dictatorship was toppled.

Impunity
Most of the journalists murders in the world have yet to bring the perpetrators and masterminds to justice—the same is also true for the Philippines. CPJ noted that killers go free in 8 of 10 cases of journalists murders.

“The Ampatuan Massacre is, in fact, only the fourth case wherein a mastermind was found guilty. A large number of masterminds and killers still roam free, and are emboldened by the government’s lack of political will and apathetic attitude towards human rights and press freedom,” said an excerpt of ‘RENEWED VIGILANCE: Continuing the fight for the Maguindanao 58’ by the Center for Media Freedom and Responsibility after the verdict was handed down by Judge Jocelyn Solis-Reyes of Quezon City Regional Trial Court Branch 221 on December 19, 2019. A guilty verdict was handed down to 28 accused and 15 accessories to the crime.

NUJP noted this is far worse than the United Nations’ data of 10% conviction rate on killings of journalists.

In September, families of Ampatuan massacre victims and various media organizations appealed the UNESCO classification of the Ampatuan massacre as resolved. The signatories cited that the guilty verdicts are currently being appealed. Also, nearly 80 more suspects, 15 of them surnamed Ampatuan, remain at large more than a decade after the mass murder. Third, despite the inclusion of photojournalist Reynaldo “Bebot” Momay among the victims –bringing the total count to 58 even if his body was never found – only issued convictions for 57 counts of murder.

After around two weeks, UNESCO reclassified the Maguindanao massacre as “ongoing or unresolved.”

“Based on this new information, the legal cases concerned will, therefore, be maintained as ‘ongoing/unresolved’ in the UNESCO Observatory of killed journalists, as well as in the upcoming ‘Director-General’s Report on Safety of Journalists and the Danger of Impunity’ until such a moment when a final verdict is reached by the Philippine judicial system,” said UNESCO Deputy Director-General Xing Qu.

Attacks, red-tagging against community and alternative media
On February 7 this year, Frenchie Mae Cumpio was arrested with four other human rights defenders in simultaneous early morning police raids on offices on February 7 in Tacloban City. Cumpio is the executive director of independent media outfit Eastern Vista and the radio anchor of Lingganay han Kamatuoran. Cumpio is also a broadcaster of community radio Radyo Tacloban. Cumpio made it to the “top 10 urgent press freedom cases” of One Free Press Coalition for the month of October 2020. Cumpio, 21, was tagged by state forces as a “high-ranking member of the Communist Party of the Philippines.”

More than 40 were arrested in a Labor Day in protest in Iloilo City to condemn the killing of activist and relief operations volunteer Jose Reynaldo “Jory” Porquia who was shot nine times inside his home on April 30. All protesters and journalists covering the protest were arrested for illegal assembly and quarantine violations. In total, seven journalists, a lawyer responding to the scene to provide legal assistance, a priest and 33 others were arrested. They were released on May 2.

On June 13, community broadcaster Elena “Lina” Tijamo was forcibly taken from her home in Barangay Kampingganon, Bantayan, Cebu. Suspected military elements—four armed masked men in civilian clothes accompanied by two women—held back family members while they covered Tijamo’s mouth with tape, tied her hands, and took her away. She has been able to send messages and call her family only to say not to post about her or her abductors won’t release her. She remains missing after five months.

Last June 29, a libel case was filed before the Regional Trial Court of Baguio City against Northern Dispatch (Nordis) editor-in-chief Kimberlie Quitasol and reporter Khim Russel Abalos. The charges were based on a complaint by Cordillera Police Regional Director Brigadier General R’win Pagkalinawan articles published by Nordis where he was quoted as ordering snipers to shoot communists who unnecessarily organize people during the Luzon-wide enhanced community quarantine. Pagkalinawan alleged that the articles “deliberately omitted” that he only advocated for shooting communists if they fight back. Pagkalinawan said this caused dishonor and damage to his reputation. The court dismissed the case on July 28 for lack of jurisdiction. Nordis journalists have also suffered red-tagging, and arrest and detention on “trumped up charges.”

The charges were re-filed in La Trinidad Municipal Trial Court on August 18 and the judge dismissed the case for the same reason as the first one, according to Nordis.

However, the case was revised to cyber libel and refiled before the Regional Trial Court Branch 59 in Baguio City. In September, another cyber libel case was filed against volunteer reporter Khim Abalos, which they claimed is the same case filed against Quitasol, Abalos and human rights group Karapatan.

Last year, NorDis Ifugao correspondent Brandon Lee was shot in front of his home. He barely survived and is currently recovering abroad.

International Day to End Impunity
“Journalists are essential in preserving the fundamental right to freedom of expression, guaranteed by Article 19 of the Universal Declaration of Human Rights. When journalists are attacked with impunity, there is a breakdown in security and judicial systems for all,” said Audrey Azoulay, Director-General of UNESCO, in her message on the occasion of the International Day to End Impunity for Crimes against Journalists 2020.

The United Nations General Assembly adopted Resolution A/RES/68/163 at its 68th session in 2013 which proclaimed 2 November as the ‘International Day to End Impunity for Crimes against Journalists’ (IDEI). The date was chosen in commemoration of the assassination of two French journalists in Mali on November 2, 2013. The resolution is a response to the “worrying situation that over the last eleven years 930 journalists have been killed for bringing news and information to the public.”

“If we do not protect journalists, our ability to remain informed and make evidence-based decisions is severely hampered. When journalists cannot do their jobs in safety, we lose an important defense against the pandemic of misinformation and disinformation that has spread online,” said UN Secretary-General António Guterres in his message for IDEI 2020.

In the World Trends in Freedom of Expression and Media Development Report 2017-2018, only 10% of the 930 cases of killings of journalists from 2006-2016 have been reported as resolved.

These figures do not include the many more journalists who on a daily basis suffer from non-fatal attacks, including torture, enforced disappearances, arbitrary detention, intimidation and harassment in both conflict and non-conflict situations. Furthermore, there are specific risks faced by women journalists including sexual attacks.