Home OPINION STATEMENT Appeal to UNESCO regarding the classification of the Ampatuan massacre case as... 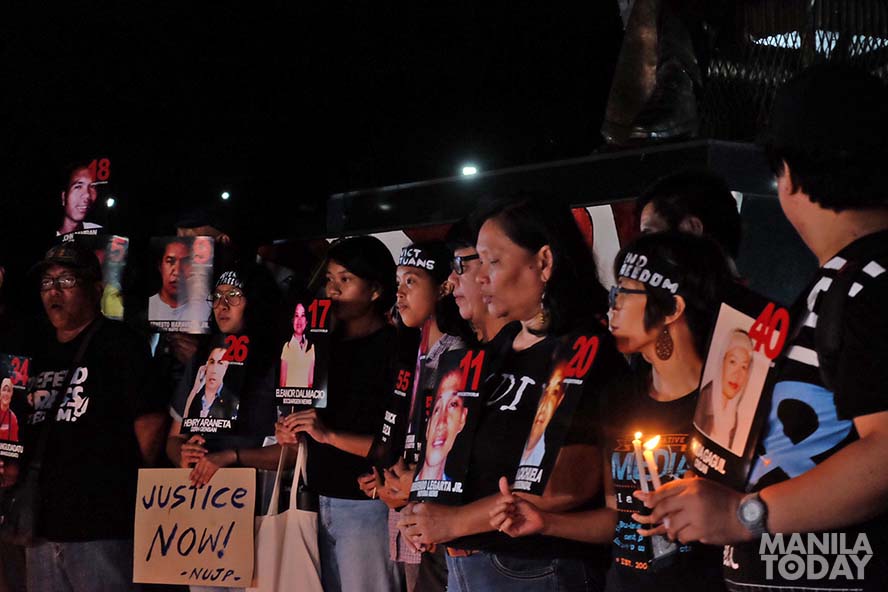 The Center for Media Freedom and Responsibility (CMFR) published the appeal letter to UNESCO from media groups and individual journalists on the supposed UNESCO classification of the Ampatuan massacre case as “resolved” from news reports that were based on a press release of the Presidential Task Force on Media Security.

The letter, dated September 12, was unacknowledged up to the time of publishing on the CMFR website on September 18.

A copy of the letter follows:

Re: Classification of Ampatuan massacre case

Greetings from the Philippines! We hope this letter finds you safe and well during such difficult times.

We – the families of the journalists killed in the Ampatuan massacre, as well as media groups, civil society organizations, and concerned citizens who have stood with them in their continuing search for justice – wish to express our distress and disappointment as news reports, including from government media, have called attention to UNESCO’s classification of the entire case as “resolved” and citing this as an accomplishment of the Duterte administration and its efforts to protect journalists.

We refer you to the following articles, including one from the state-run Philippine News Agency, which marks it as a press release from the Presidential Task Force on Media Security (PTFOMS) in the Malacañang Palace:

These news reports quote from a letter that former Assistant Director General Moez Chackchouk apparently wrote to Ambassador Theresa Lazaro, Philippine Permanent Delegate to UNESCO and Philippine Ambassador to France, to wit: “I am pleased to confirm that we will classify these as resolved, both in the UNESCO Observatory of Killed Journalists and in the 2020 Director-General Report on the Safety of Journalists.”

We acknowledge that the court decision on December 19, 2019, which convicted 28 of the accused of planning and carrying out that most gruesome crime – and 15 others as accessories – was a triumph of justice for the victims of the worst incident of electoral violence in Philippine history, and the deadliest single attack on journalists in the world.

Regrettably, that one court decision does not mean that the case is “resolved.” Far from it.

Second, nearly 80 more suspects, 15 of them surnamed Ampatuan, remain at large more than a decade after the mass murder. All of them should be tried, but as of February 20, 2020, only four, two of them policemen, have been arrested and are on trial. Another principal accused, Sajid Islam Ampatuan, brother of Zaldy, Andal Jr. and Anwar Ampatuan, was acquitted even if he was present at the meeting when the massacre was planned. He is now an incumbent mayor of a town in Maguindanao province, where the massacre happened.

This is the reason why the families of the 32 journalists who perished, as well as the witnesses who testified for the prosecution, continue to fear for their safety. As many are not enrolled in the Department of Justice’s witness protection program, and continue to live in their known communities, they remain exposed to possible retaliation and attacks.

Third, the victims’ families, and we who have been with them throughout their difficult struggle, still cannot reconcile ourselves to the fact that, while the court, more than three years into the trial, allowed the inclusion of photojournalist Reynaldo “Bebot” Momay among the victims –bringing the total count to 58 even if his body was never found – only issued convictions for 57 counts of murder, dashing the hopes of justice for Momay’s family.

It is also important to note that, in January 2015, criminal charges were filed before the Maguindanao provincial prosecutor against 49 other persons, including local government officials and police officers, for their alleged participation in the planning, execution, and subsequent cover-up of the Ampatuan massacre. Although these charges have yet to be resolved by the prosecutor, we understand that the lawyers of the victims’ families intend to pursue these cases.

It is unfortunate that UNESCO’s conclusion appears to have relied solely upon government claims, without consideration for the other facts and contexts surrounding the case — a glaring oversight, considering that many of us have good relations and work closely with your agency’s Jakarta, Bangkok, and other offices.

We are most distressed that Mr. Chackchouk’s letter is now being used by the Duterte administration to paint a misleading picture of the state of press freedom in the country. For example, Undersecretary Joel Egco, the executive director of PTFOMS, has said: “With UNESCO acknowledging the finality of the Ampatuan Massacre, we can proudly proclaim to the world that any violence against our media workers will never go unpunished, and that the so-called ‘culture of impunity’ against journalists in the country has finally come to an end.”

Lest it be forgotten, of the 188 journalists killed in the Philippines since 1986, 16 have lost their lives under President Rodrigo Duterte, who has not bothered to hide his disdain for free and independent media. Duterte led the charge to shut down ABS-CBN, the country’s largest broadcast network. His government continues to hound independent online news outfit Rappler and its founder and CEO Maria Ressa with dubious legal cases. His national security advisers have incessantly tagged news outfits and journalists who have criticized the government as allies or pawns of “terrorists.” This is a particular source of concern, in view of the recent enactment of the draconian Anti-Terrorism Law. We hope that UNESCO will not play into the attempts to “sanitize” the reputation of the Duterte government among international agencies in view of the pending scrutiny of the President by the International Criminal Court.

UNESCO is known for looking at complex issues with a wide lens. In this instance, the wide lens fails to reflect the legal processes and ignores the pertinent issues which delay justice in the system. We recommend reviewing this wide lens as it applies to the Ampatuan trial and the court decision in 2019 so as not to betray the hopes of the families of the victims who are still awaiting justice.

We, the undersigned, respectfully call upon your office to proactively exercise its mandate by doing due diligence and complete staff work on this matter to ensure that declarations about these cases reflect the reality on ground. In this way, UNESCO could arrive at a balanced and comprehensive assessment of press freedom and freedom of expression in general in the Philippines, beginning with thorough consultations with key stakeholders, and not only State officials.

We would be most grateful for your attention and consideration as this is a matter of utmost concern.

Many thanks. In the meantime, please be assured of our esteem and continuing support.

Freedom for Media, Freedom for All Network Conveners
Center for Media Freedom and Responsibility, MindaNews, National Union of Journalists of the Philippines, Philippine Center for Investigative Journalism, and Philippine Press Institute

International nations extend support vs China’s yet another dispute on PH...